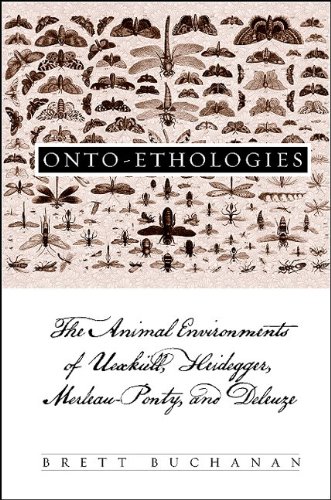 For readers of twentieth-century philosophy, psychology and biology, Jakob von Uexküll is a name that recurs, albeit sometimes faintly, in the writing of an astonishing array of thinkers.  Despite the influence of his ideas on contemporary thought, relatively little scholarship has been devoted to his original writings, much less to their complicated reception.  Brett Buchanan’s Onto-Ethologies, which takes on the crucial task of elucidating the philosophical import of some Uexküllian concepts and tracking their fate in the work of three major later philosophers, is therefore both welcome and long overdue.

Buchanan is keen to place von Uexküll in the context of current philosophical interest in the “question of the animal,” and his coining of “onto-ethology” amounts to a claim that a distinctive lineage in contemporary ontology emerges from the investigation of animal worlds that were conducted by turn-of-the-20th-century biologists.  This tradition was initiated in Germany by embryologist Karl Baer, whose pioneering work in developmental biology convinced him that a fundamental characteristic of life was its immanent Zielstrebigkeit (directedness).  Though Baer’s materialism marked his views as a significant departure from the vitalism of earlier biologists, his emphasis on orderly epigenetic unfolding put him at odds with the radically ateleological population biology of Darwin.  The career of von Uexküll, who studied in the biology department built by Baer (University of Dorpat), can be seen as an attempt to supply a vaguely Kantian bio-philosophical groundwork for the Baerian critique of mechanism.  The insistence on biology’s fundamental difference from the mechanical sciences of chemistry and physics is the thread that connects his four most important works: Umwelt und Innenwelt der Tiere (Environment and Inner World of Animals, 1909/1921), Theoretische Biologie (Theoretical Biology, 1920), Streifzüge durch die Umwelten von Tieren und Menschen (A Stroll Through the Worlds of Animals and Men, 1934), and Bedeutungslehre (The Theory of Meaning, 1940.)

Von Uexküll’s first critical concept is Planmäßigheit (conformity to plan), the notion that, in Buchanan’s words, “nature accords with an overarching plan that has set parameters in which life-forms can interact (thus not entirely random) [and has] inclusive agents and forces other than the parental genes as developmentally constitutive for the organism (thus not exclusively materialistic or organic).” (19)  This rule is “supra-mechanical,” a designation that leads von Uexküll to flirt with (but never avow) a theistic ontology and also provides the basis for a supra-organismal, supra-specific biology (i.e., modern ecology).  More interesting are von Uexküll’s ideas about the conformity of specific organisms to plans that are wholly subjective and unique.  For von Uexküll, following Kant, the singular objective reality of an organism’s world (Umgebung) is unknowable, and it is, therefore, more profitable to speak in the plural of such worlds as Umwelten (environments) that do not pre-exist biological subjects but come into being simultaneously with them.  Umwelt will prove to be the richest of von Uexküllian ideas for later philosophers, and Buchanan does a good job surveying the biologist’s variously interpretable statements about it.  When explained through the famous example of the tick, whose Umwelt in von Uexküll’s telling is utterly defined by a very few stimuli (heat, butyric acid, smoothness), the concept can seem quite closed and mechanistic.  The memorable image of the Umwelt as a “soap-bubble” blown around the biological subject likewise contributes to a sense of ontological isolation.  Buchanan, however, is quick (and right) to point out that Umwelt is implicitly intersubjective.

The bulk of the book consists of four chapters on the afterlife of von Uexküll’s concept of Umwelt, two on Heidegger and one each on Merleau-Ponty and Deleuze.  These chapters meticulously survey the relevant portions of each philosopher, and accordingly contain much that will be well known to the average academic reader.  The care with which the environmental ideas are unpacked, however, may make these sections very useful as teaching texts in advanced courses in the philosophy of science and science studies.  Heidegger seized on von Uexküll’s research as early as the composition of Being and Time and as late as his 1967 lecture on Heraclitus, but his most extensive engagement is recorded in the 1929–30 lecture series (The Fundamental Concepts of Metaphysics).  Approving von Uexküll’s “insight into the relational structure between the animal and its environment,” Heidegger felt compelled to distinguish the manner in which animals and humans (Dasein) relate to their worlds. (52)  The result is his famous explication of the as-structure as the defining characteristic of Dasein.  Only humans can apprehend an object in their environment as such an object; animals, however, only relate to objects as what Heidegger calls “disinhibitors,” or triggers for an unreflective response.  This is the meaning of Heidegger’s pronouncement that the stone is weltlos (worldless), the animal weltarm (poor in world), and the human weltbildend (world-forming).

Heidegger’s attempt to maintain the abyssal separation of human and animal leads to further fine distinctions, for example, between the Benommenheit (captivation) and Genommenheit (absorption) of the animal whose actions are mere behaviour (Benehmen), on the one hand, and, on the other, the Getriebenheit (restlessness) that characterises Dasein’s comportment (Verhalten) toward its world.  Buchanan does a great service in contextualising these writings as reactions to the claims of contemporary biologists, pointing out some of their lingering contradictions in the process.  Of particular interest is Buchanan’s suggestion that Heidegger’s recognition of the embodied animal’s diachronic dimension (not captured by the atemporal concept “organism”) led him to an impasse that later thinkers would address.

The chapters on Merleau-Ponty and Deleuze are less ambitious, confining themselves to explications of their Uexküllian inheritances.  Merleau-Ponty is much less concerned with distinguishing human from animal being; his major project is to characterise life in general without relying on a reductive mechanism or an immaterial vitalism.  His first significant attempt in this vein occurs in The Structure of Behavior, where the key term “behavior” (comportement) comes to “demonstrate a relational enclosure insofar as the organism is structurally united with its world.” (120)  Merleau-Ponty had evidently not read any of von Uexküll’s works at this early date in his career, but Buchanan argues persuasively that his formulations came indirectly through his readings of Buytendijk and Heidegger.  In his late works, the “Nature” lectures of the late 1950s and the unfinished The Visible and the Invisible, Merleau-Ponty explicitly engages with von Uexküll, and Buchanan makes the case that two ideas in particular, namely, the Umwelt and the living being as a “melody that sings itself,” significantly influenced his theory of the body, of the flesh, of chiasmus and of interanimality.  Deleuze, on his part, pairs von Uexküll’s ethology with Spinoza’s to help define his key term affect, which goes beyond even Merleau-Ponty’s attempt to obviate the distinction between matter and form by emphasising the passage from one bodily state to another.  In Deleuze’s hands, the organism that was the focal point of traditional ethology gives way to a heterogeneous situation in which any temporary accumulation of relations can be understood as a “body” with a particular capacity to be affected.  This shattering of the “soap bubble” model of the Umwelt gives rise to a complex model of becoming that interestingly reverts to the musical idiom of von Uexküll (rhythms, melodies, refrains).

Given the incipient state of the scholarly conversation on von Uexküll, it is hard to fault Buchanan for not providing comprehensive coverage of his subject.  Still, the structure of Onto-Ethologies tends to focus attention on the more famous philosophers who made use of von Uexküll’s ideas than the ideas themselves, flattening somewhat the significance of the latter.  Buchanan misses the opportunity to delineate and reflect on the non-Darwinian bio-philosophical tradition so formative of figures like Callois and Lacan.  A more significant problem is the brief treatment of von Uexküll as a founder of the field of bio-semiotics, the work for which he has received the most recent scholarly attention from the likes of Thomas Sebeok, Jesper Hoffmeyer and Kalevi Kull.  Von Uexküll worked diligently to clarify the basic mechanisms of feedback that would eventually become the breakthrough concept in cybernetics and informatics.  His diagram of the Funktionskreis (Functional Circle)—originating in Theoretische Biologie but revised repeatedly in later texts—relates the “sense world” (Merkwelt) in which a living organism receives signs to the “effect world” (Wirkwelt) in which it produces them.  This dramatic reframing of life as semiosis (and biology as a kind of semiotics) has enormous consequences for bio-philosophy that might fruitfully have been explored.  And although he is far from comprehensive on the subject, von Uexküll offers an internally consistent and historically influential vision of “bare life” (to name a common interest of Agamben and Derrida) as a process of signification.  At a moment when biology appears to have replaced language as the main topic of Continental philosophy, it would be well worthwhile to begin the process of exploring the original conjunction of these subjects.  The excellent Onto-Ethologies should spur further investigations of the obscure Estonian biologist whose idiosyncratic ideas about the nature of life have proven more durable than those of his famous contemporaries.