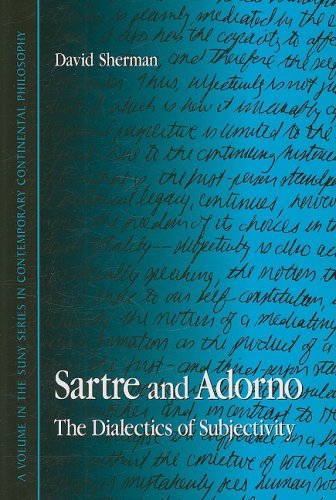 David Sherman’s comparative study of the conception of subjectivity in two key thinkers, one from the Frankfurt School and one from French Existentialism, draws its strength from two key facts. First, Sherman examines the little-known fact that Theodor Adorno himself had substantial engagement with the same thinkers that were formative for Jean-Paul Sartre. Second, Sherman focusses on Adorno’s critical work on Sartre’s own writings.

Sherman’s work is important because it is the first English-language book I know of to examine the relationship between Sartre and the Frankfurt School—a relationship that curiously never developed beyond a brief interest in Sartre by Adorno and Herbert Marcuse—despite very similar concerns shared by Adorno, Max Horkheimer and the mature Sartre. Sherman begins by noting that Adorno’s engagement with existentialism and phenomenology, an interest that was “not unsympathetic to the concerns that motivated these philosophical movements,” spanned his entire life. (13) Unlike other writers examining Adorno’s corpus, Sherman focusses (in the second and third chapters of the book) not only on Adorno’s engagement with Heidegger and Husserl, but also on his Habilitationsschrift on Kierkegaard. Sherman does this, I believe, in order to set up the second section of the book wherein he discusses Sartre’s relationship to subjectivity and to mediations between subject and object.

In the second section of the book, Sherman examines Sartre’s relationship to subjectivity, and tries to show that Sartre avoids the problem of a static subject-object relationship that sunk the three thinkers discussed in the first section. (69) He does this by engaging texts not from Sartre’s later period, but principally Being and Nothingness. Thus, in Chapter 4, Sherman examines early Frankfurt School attacks on Sartre, from Adorno’s essay “Commitment,” a response to Sartre’s What is Literature?, and Adorno’s comments on existentialism in Negative Dialectics, to Marcuse’s critical review of Being and Nothingness. Sherman tries to show that Adorno’s critique, building on traditional accounts of Sartre’s indifference to the problem of the tension between subject and object, is wrong and that Sartre, in fact, does have a theory that “maintains the dialectical tension between them.” (78) Contra Marcuse, whom Sherman accuses of having appropriated Adorno’s critique of his own writing and of using it against Sartre, Sherman argues that Sartre does not confuse metaphysical and actual freedom, and that a detailed reading of Being and Nothingness would show Marcuse to be mistaken.

Chapter 4 serves to set up a series of responses to traditional critiques of Sartre, using the Frankfurt School as a foil. In Chapter 5, Sherman examines Sartre’s relationship to the same thinkers discussed in the first section and to various existentialist and phenomenological concerns (Being, Knowing and Death). In the final chapter of this section, Sherman defends Sartre’s theory of mediating subjectivity and builds a defence of Sartre’s philosophy based on his criticism of the Frankfurt School’s attacks.

If the goal of the second section of the book was to defend Sartre against the Frankfurt School, the goal of the third section is, first, to show that Adorno was, at least in terms of philosophical interests, closer to Sartre than previously thought and, second, that the post-modern embrace of Adorno is unjustified.

First, in Chapter 7, Sherman argues that the standard reading of Adorno as rejecting the Enlightenment theory of reason is wrong. He agrees that, in the Dialectic of Enlightenment, Adorno and Horkheimer reject one of the Enlightenment’s versions of reason; yet, at the same time, Adorno and Horkheimer embrace the reinvention, and not the abandonment, of the Enlightenment project: “the point is that the Enlightenment must consider itself, if men are not to be wholly betrayed.” (183) Adorno’s criticism of philosophy does not have as its goal the destruction of knowledge, but the release of its emancipatory potential (here, Sherman is also engaged in an attack on the second-generation Frankfurt School critique of Adorno). Second, Sherman argues that, in spite of the post-modern insistence that Adorno was interested in the death of the subject and rejected philosophical critique of actually existing subjectivities, Adorno, in fact, had a favourable view of efforts to stress self-responsibility and self-determination. (175) Sherman accomplishes this by examining both Adorno’s writings on Kierkegaard and his mature writings on Hegel in Negative Dialectics. In particular, he argues that much of Adorno’s critique aims at unleashing true human freedom.

Beyond some minor points, for instance, the claim that Adorno actually sided against Horkheimer and rejected the view that social practices could produce valuable philosophical critique (204), a claim which I am inclined to doubt as it contradicts the standard view of the role of immanent critique in Adorno’s work, I have three principal objections to Sherman’s work. The first pertains to the idea that Sartre actually has an adequate theory of mediation in Being and Nothingness. My concern with Sherman’s book is how to reconcile the idea of mediation in Sartre’s early work with Sartre’s professed concern that Being and Nothingness needed to be revised in light of his new-found Marxist sympathies. It seems to me that Sartre himself believed, contra Sherman, that his theory of mediation was insufficient (and this is why he wrote the Critique of Dialectical Reason). A more detailed defence of this assertion is needed.

My second and third concerns involve content. First, Sherman does not treat in any great detail either Sartre’s work on Flaubert or, more importantly, Sartre’s Critique of Dialectical Reason. There may be programmatic reasons for not doing so; Adorno never (to the best of my knowledge) responded to those works. That said, Sartre never responded to any of Adorno’s work, and that does not stop Sherman from examining the relationship between the two thinkers. Whatever the reason, it would be helpful to have a comparison of Sartre’s writings from his Marxist period with Adorno’s own Marxist-inspired writings. Secondly, it would also seem that an examination of Sartre’s and Adorno’s politics, especially during the post-war period when both were active, would shine a light on their respective philosophies and presumably on their sympathies. Adorno, as is well known, became substantially less radical and more pro-American (particularly in the 1960s) just as Sartre was becoming politically engaged. In my mind, there are important philosophical reasons, and not just biographical ones, underlying this that deserve to be examined.

There are, on the final tally, then, two very good reasons to recommend this book. First, Sherman does an excellent job using the Frankfurt School as a foil to develop a skilled defence of Sartre’s early philosophy. This analysis would be useful not just for researchers interested in the comparisons of German and French philosophy but also for anyone interested in the debates surrounding Sartre’s work from the 1930s and ’40s. Second, Sherman’s unique interpretation of Adorno’s existentialist commitments in the final section is an important resource for anyone interested in opposing the post-modern appropriation of Adorno.