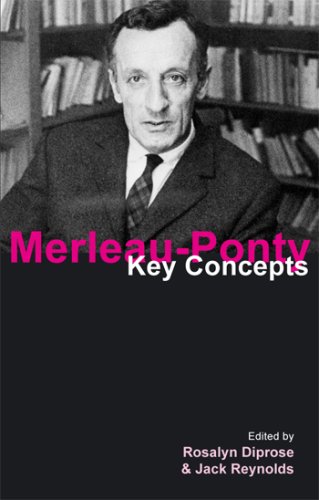 This volume in Acumen’s Key Concepts series makes a significant contribution to the growing appreciation of Merleau-Ponty’s body of work.  The editors, Rosalyn Diprose and Jack Reynolds, have assembled a remarkably concise volume that is of interest to both those seeking an introduction to Merleau-Ponty’s thought, as well as those whose understanding is more advanced.  This book can appeal to both kinds of reader because it presents the key aspects of Merleau-Ponty’s thought in a straightforward and succinct manner, without sacrificing any of its characteristic novelty, nuance, and rigour.

Sonia Kruks considers Merleau-Ponty’s reflections upon the philosophy of history (specifically his engagements with G.W.F. Hegel and Karl Marx) and meticulously clarifies the way in which his thought avoids both relativism and determinism.  Furthermore, she highlights the political relevance of his philosophy of history through a careful explication of his belief that there are “justifiable choices to be made in any situation” and that we, therefore, can never completely avoid our political responsibilities.  (78)  Kruks’ discussion of political responsibility is complemented by Diana Coole’s extraordinary discussion of Merleau-Ponty’s engagement with politics and the political.  Coole highlights his recognition that the task of the political actor is “to seek signs of potentially transgressive and transformative capacities within the ambiguities and complexities of [the force field of collective life].”  (91)  Coole’s essay contributes immensely to our understanding of Merleau-Ponty’s political ontology and phenomenology of political practice and makes sense of his novel relationship with the thought of Marx and Machiavelli.  Coole’s discussion is additionally noteworthy for her convincing argument against Barry F. Cooper’s contention that Merleau-Ponty’s politics “became more conservative over time” (86), demonstrating instead that he consistently “wrote as a man of the left.”  (82)  Closing this section, Hugh J. Silverman eruditely discusses the importance of art to Merleau-Ponty’s reflections, and elucidates the fundamental characteristics of his aesthetics.

Part three, titled “Inventions,” considers the key concepts that form the core of Merleau-Ponty’s philosophy.  David Morris’ exceptional essay, “Body,” is laudable for its thorough captures of the essential aspects of Merleau-Ponty’s reflections on this topic.  For Morris, understanding the role of the body in Merleau-Ponty’s thought requires understanding his “distinctive philosophical gesture,” which he identifies as the “effort to locate the openness and source of being’s meaning in something precedent to and exceeding the philosopher in the body, nature, flesh…and to do so via a radical reflection that begins with this openness.”  (119)  Morris’ essay could easily stand on its own as an introduction to Merleau-Ponty’s reflections on embodiment and corporeality, specifically as it is discussed in Phenomenology of Perception.  David R. Cerbone explicates Merleau-Ponty’s unique contributions to the philosophical understanding of perception, particularly as it follows from his critique of empiricism and intellectualism.  Gail Weiss successfully undertakes the daunting task of explicating the multiple meanings of the term “ambiguity” in Merleau-Ponty’s thought.

Harry Adams carefully outlines Merleau-Ponty’s understanding of expression as creative, fundamentally dependent upon corporeality, and enacted between “decentred subjects who call and respond to messages whose origins and meanings are never altogether clear and whose truth is never absolute.”  (160)  Adams makes clear that the task of expression, for Merleau-Ponty, is not to impose meaning on the world but instead to “let the world and its ‘wild meaning’ speak through us.”  (160)  Susan L. Cataldi’s essay is devoted to Merleau-Ponty’s understanding of affect and sensibility.  Her essay is an original contribution to the understanding of Merleau-Ponty’s thought in that it provides important insight into a dimension, which is not often explicitly discussed, but which in her view is “interfused with sense perception in the living experience Merleau-Ponty tries philosophically to capture.”  (163)  In light of the fairly recent English translation of Merleau-Ponty’s course notes, titled Nature, Scott Churchill thoughtfully outlines the direction of Merleau-Ponty’s thought regarding nature and animality.  Churchill’s essay will be of particular interest to anyone interested in Merleau-Ponty’s engagement with the thought of Jakob von Uexküll and his belief that it could serve as the basis of a phenomenology of nature.  (182)  Fred Evans closes section three with an instructive discussion of Merleau-Ponty’s notions of chiasm and flesh.  He concludes that Merleau-Ponty’s sense of the latter preserves the difference between the sentient and the sensible in order to draw our attention to the “unity we share with other beings” with whom we share this planet.

The essays of the fourth part, “Extensions,” survey some of the ways in which Merleau-Ponty’s thought has been used in other disciplines.  Ann Murphy discusses Merleau-Ponty’s work in relation to feminism and race theory.  She demonstrates that, while Merleau-Ponty’s work is open to some criticism from feminists, it has informed feminist ideas such as “gender performativity.”  (200)  In addition, she indicates how it can contribute to race theory insofar as it can help to “account for the ways in which racism does much of its damage at the pre-reflective, unconscious level, thus undermining the naive belief that all racism is explicit and easily recognized.”  (206)  Shaun Gallagher explores the resonance Merleau-Ponty’s thought continues to have for cognitive science.  Specifically, he considers the ways in which Merleau-Ponty’s work figures in the debate surrounding the possibility of “naturalizing phenomenology” (212), as well as his influence on what Gallagher calls “cognitive social neuroscience.”  (214)  Philipa Rothfield’s essay takes stock of Merleau-Ponty’s contribution to health studies and our understanding of living well.  She focuses on the surprising ways in which his thought “paves the way for an understanding of medical ethics that is sensitive to the perceptual and situational specificities intrinsic to healthcare practice.”  (227)  In the final essay, Nick Crossley surveys Merleau-Ponty’s considerable influence upon sociology, particularly the work of Pierre Bourdieu.  In doing so, he brings to the fore Merleau-Ponty’s indebtedness to Max Weber, as well as his belief that “sociology should become more phenomenological” and that phenomenology should engage with sociology.  (235)

Merleau-Ponty: Key Concepts is an invaluable volume because of the highly rigorous and informative nature of the essays it comprises.  While concise, the volume provides a nuanced survey of the important elements in Merleau-Ponty’s thought.  The goal of this volume is to encourage others to read the oeuvre of Merleau-Ponty; hopefully, with its clear and innovative contributions, it will fulfill its task.