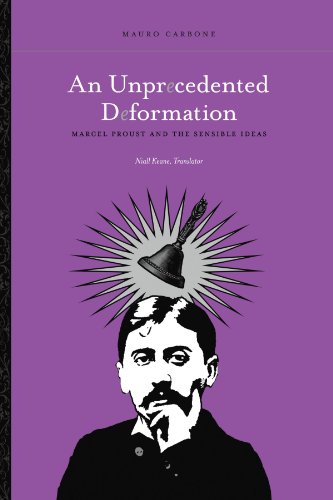 In his new book, An Unprecedented Deformation: Marcel Proust and the Sensible Ideas, Mauro Carbone proposes to follow “to the letter” Proust’s famous passage on involuntary memory in the first volume of À la recherche du temps perdu.  The manner in which he takes up this pursuit, however, is philosophical.  Carbone suggests that the question that is posed by the problem of involuntary memory here is a repetition of the double question found in Plato’s Meno at the outset of Western philosophy: How is it possible to inquire into what one does not know? And if one finds what one does not know, how is it possible to recognise it?  While Plato’s response, that is, his appeal to the anamnesis of intelligible ideas, determines much of the course of Western thought, Carbone argues that Proust’s solution is fundamentally un-Platonic because it invokes a different kind of idea: the sensible idea.  Indeed, the notion of the sensible idea has a different origin. It developed out of modern philosophy’s consideration of “sensible cognition,” and was explored most recently by Maurice Merleau-Ponty and Gilles Deleuze.  Focusing on these last two thinkers in particular, Carbone investigates how Proustian involuntary memory re-opens the more general philosophical question about the genesis of ideas.

Readers of Proust are well acquainted with the strange phenomenon of involuntary memory, famously developed in the madeleine passage, but oft repeated throughout the Recherche.  The spectral taste of the little cake and warm tea suddenly transports the narrator to a time and place at once familiar and yet previously unknown to him, a formula that Carbone emphasises in Merleau-Ponty’s onto-psychoanalysis in the following way: “I never knew it, and yet I have always known it.”  This temporality and topos is described as both the locale of the narrator’s childhood and yet nothing encountered in the lived time of that childhood.  Not simply given, but created, it presents the carnal essence (Wesenschau) or sensible idea of what Deleuze calls the “in-itself of Combray.”

The import of this phenomenon on Carbone’s reading is a complex iconoclasm of the image of thought stretching from Plato to Husserl.  Following Heidegger, however, he argues that one must avoid making the sensible idea derivative of the more traditional intellectual idea or simply reversing the hierarchy.  Here Carbone follows Deleuze in locating the Proustian contribution in the way in which it confronts the dominant model of sameness with a model of difference, the two possible ways of thinking resemblance laid out in Logique du sens.  In proposing to follow Proust in making difference originary, Deleuze argues that one does not merely invert the binary.  Rather, as Carbone explains: “it seems more fruitful to recognise that succession is overlapped by simultaneity and to make the assumption, then, that resemblance and identity are produced simultaneously with the repetition of our encounter with the differences which constitute such resemblance and identity.” (37)

If one considers these two models in relation to the passage in Proust that Carbone analyses, one observes that, approached from the model of sameness, the description of the narrator’s experience is marked by a series of failures. Thus the narrator fails to intentionally perform the act of memory; the narrator fails to achieve the memory through an appeal to his good-natured intellectual faculties; the narrator fails to abstract the memory from the sensuous experience that occasions it.  In response to this “failure” Carbone asks how one might reinterpret this phenomenon from the vantage of difference, a question that effectively asks: How can there be recognition without resemblance?  In order to answer this question, Carbone traces largely three considerations in Merleau-Ponty and Deleuze about the nature of sensible ideas: 1) the mode of presentation, 2) the mode of recognition, and 3) the mode of temporality.

Carbone argues that if one can no longer appeal to the preliminary model of sameness, the presentation of ideas and their recognition must grow out of the differential experience of the sensible world itself, what one might call, “the empirical genesis of the transcendental.” (21)  This means that the presentation of sense itself will be sensible, not abstract, developed in the presentation of differences across time.  Such a claim requires a parallel rethinking of temporality, however.  Thus Carbone invokes Deleuze’s juxtaposition of a mythical time, the time of aiôn, with mundane time, with chronos.   For Deleuze the time of aiôn marks an absolute past, a time of the ancient gods, which is not an abstract eternity or creationism, but a continuously creative time before causality.  In order to conjure such a time, however, one must free oneself from the bonds of lived time, a process that leads Deleuze to argue for an original unity between Lethe and Mnemosyne, between forgetting and memory.

Carbone traces a similar structure in Merleau-Ponty’s late work.  Like Deleuze’s material understanding of difference, Carbone emphasises Merleau-Ponty’s notion of Being understood as sensuous mutation or “Flesh.”  While Merleau-Ponty pulls from an array of sources, Carbone thematises his ontological reinterpretation of psychoanalysis, which thinks the conscious and unconscious, activity and passivity, as a unified phenomenon operating at a more originary level than subjectivity.  The result is a notion of trans-subjective desire born out of the differential “lacks” in Flesh itself.  This dispersal of desire inaugurates the play of introjections and retrojections that opens up fields or levels in Being where “identities” are formed and dimensions of meaning come to oscillate in a “primordial symbolism.”  Like Deleuze, then, Merleau-Ponty argues that this process unfolds in an “operative temporality” irreducible to chronological time, a temporality that pulls the past into the future and spreads the future across the past and present in a chiasm of existing and essencing, or what Heidegger calls Wesen in the verbal sense.

It is a strength of both Deleuze’s and Merleau-Ponty’s analyses and of Carbone’s reading of both philosophers that these claims are cashed out in a variety of examples.  Thus, for instance, both Merleau-Ponty and Deleuze appeal to Jakob Von Uexküll’s notion of Um-ring to help present the sensible ideas of animals.  The Um-ring is comprised of the set of variations between the physico-phenomenological make-up of a given creature and its environment, which collaboratively inaugurates its unique mode of existence.  On this view there is no preceding causality or finalism, nor any abstract notion of, say, a tick or a whale.  There is only the emergence of “tickness” or “whaleness” from this set of sensible variations.  Carbone highlights the musical metaphor of melody to which both Deleuze and Merleau-Ponty appeal in order to further this point.  For one might say that the animal existence comes to sing a kind of melody from out of these initial sensible differences, a theme that neither pre-exists those differences, nor can be separated from their sensuous presentation.  Similarly, Swann’s love for Odette in Proust is rooted in the melody of the Vinteuil sonata that haunts him, an example that simultaneously shows how sensible ideas not only initiate meaning but also the identities that we tend to see as experiencing this meaning.  As Carbone emphasises, the sensible idea of Combray for Proust’s narrator “was not in [him], it was [him].” (3)

Carbone concludes that the philosophical explication of Proustian involuntary memory results in an important response to the dominant philosophical model of the genesis of ideas.  Following Merleau-Ponty and Deleuze, he argues that the discovery of sensible ideas allows philosophy to take art seriously again, or for the first time, and exposes the ontological overlapping of difference and sense, identity and dispossession, previously impossible on the model of sameness.  The five chapters and appendix that this brief study comprises are an insightful exploration not simply of Proust, but of the under-examined and mysterious notion of the sensible idea.  From this point of view, Carbone’s work is a fascinating corrective.  On the other hand, at 113 pages the book leaves room for more work to be done.  Carbone’s study is perhaps most interesting for the way in which it reads Deleuze and Merleau-Ponty together on the theme of sensible ideas, two figures that are often situated antagonistically in light of Deleuze’s strong criticisms of phenomenology.  Yet, beyond the originality of this cooperative reading, Carbone seems hesitant to move beyond Merleau-Ponty or Deleuze, at least in the scope of the present project.  An Unprecedented Deformation is an excellent integration of a series of essays that Carbone has dedicated to the theme of sensible ideas in recent years, leaving one with the hope for a fuller work to come.