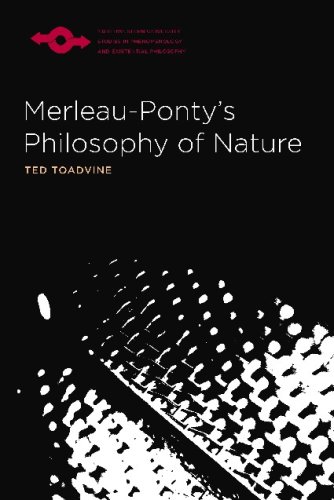 Review by Bryan Smyth, University of Memphis. Published in Symposium 15:2 (2011).

Among the numerous books dealing with Merleau-Ponty that have appeared in recent years, this is one of the few that are genuinely important. This is because in approaching Merleau-Ponty’s project in terms of the philosophy of nature, and doing so with singular expertise, this book forcefully rehabilitates one of the abiding philosophical concerns that lie at the very heart of that project, but which has not received due attention within Merleau-Ponty scholarship: what exactly do (or should) we mean by ‘nature,’ and just what is our relationship to it? For if, as is empirically undeniable, humanity exists immanently within nature, then how can our understanding of it possibly respect its transcendence, i.e., its brute inhumanity?

Coming to terms with this ambiguous duality was a central concern for Merleau-Ponty, and as Toadvine makes clear, it is also a concern for contemporary environmental philosophy—or rather, it should be a concern. For in his view, inasmuch as its conception of nature is grounded uncritically in scientific positivism, contemporary environmental philosophy remains hopelessly torn between opposed approaches based respectively in empirical realism and constructivist idealism. Each of these approaches is reductively geared to one side of the duality of immanence and transcendence—each thus fails to capture and embrace the dynamic tension between them, and hence cannot but reiterate a bad ambiguity. As a result, both approaches ultimately yield sceptical conclusions concerning nature, for neither is able to affirm that it could have a meaning that is at once autochthonous yet also intelligible.

It is for this task that Toadvine wants to revive the philosophy of nature as “a richer, multifaceted philosophical investigation of nature” (6), and to pursue this on a phenomenological—and specifically a Merleau-Pontian—basis. For the task envisioned here implies tracing a new metaphysical path between realism and idealism in order to descriptively disclose the “ontological foundation” (10) of the ambivalence concerning nature and humanity’s relation to it that characterises contemporary environmental philosophy. Toadvine contends that this disclosure is “the phenomenological task par excellence” (16)—suggesting that in methodological terms phenomenology is most fully and truly realised as ‘ecophenomenology,’ i.e., as prioritizing the question of nature—and that Merleau-Ponty’s work “is foundational for [this] style of investigation.” (8) This is ultimately because Merleau-Ponty, in pushing phenomenology toward its methodological limits, made of it a sort of “meta-phenomenology” (8) based on a philosophy of expression. The idea of expressive mediation is the key to the new metaphysics of nature that Toadvine wants to draw out from Merleau-Ponty—the idea that nature “is precisely what discloses itself through our expressive acts, and as requiring such expression for its disclosure.” (15, original italics).

The book unfolds across five chapters which roughly follow the chronological development of Merleau-Ponty’s work. Chapter 1, “Nature as Gestalt and Melody,” thus begins with the Gestalt-theoretic ontology of nature that Merleau-Ponty elaborated in The Structure of Behaviour. Although this text, written in 1938, preceded Merleau-Ponty’s definitive turn to phenomenology, its ambitious attempt to navigate between realism and idealism on the basis of the perceptual apprehension of material and vital Gestalten nonetheless effectively laid out the problem concerning nature that would remain thematically central to his phenomenological work: “how to characterise nature as an assemblage of meanings that are embodied without being real, and experiential without being subjective.” (22)

At this initial stage, though, this problem is not resolved. Although Merleau-Ponty—developing an idea from von Uexküll—eschewed the scientific objectification of nature by analogizing its Gestalt structures with melody, and although he construed the consciousness to which these structures are disclosed as itself a Gestalt structure that would be, as Toadvine put it, “ontologically continuous” with matter and life, and hence as relating to them through a sort of recursively teleological movement that would enjoy no “constitutive priority” over them, there nevertheless remains a problematic ambiguity concerning the relationship between structure and its signification, i.e., between perceptual and intellectual consciousness. For inasmuch as structure remains a perceptual phenomenon, meaning in nature remains dependent upon a perceiving subjectivity. This is what Merleau-Ponty called ‘the problem of perception’—how perception as embedded in nature can yet generate reflective awareness of nature’s autochthony. While at this point Merleau-Ponty may well have seen that this required an account of thought as an expression of life, i.e., as based on “an expressive movement within nature itself” (25), what was not yet clear—for it would require a de-subjectifying “methodological reversal”—was how to provide “an account of philosophical reflection as a modality of [that expressive movement].” (49)

This is taken up in Chapter 2, “Radical Reflection and the Resistance of Things,” where Toadvine deals with the expressive role of reflection in Phenomenology of Perception. Here he shows how Merleau-Ponty, now based methodologically on his reinterpretation of Husserlian phenomenology, approaches nature ‘from within’ rather than from the standpoint of an ‘outside spectator’—specifically, as the correlate of the ‘natural’ body in an expressive dialogue that underwrites perceptual awareness. Although prima facie paradoxical, this move is intended to address the problem of The Structure of Behaviour by formulating an account of ‘radical reflection’ in which philosophical thought would take up its own pre-reflective conditions through a non-coincident process of creative expression that would also serve to reveal nature’s “aloofness” and “immemoriality” (70), that is, its intrinsic resistance to philosophical articulation, phenomenological or otherwise.

But as Toadvine shows, this is no less ontologically ambiguous than the earlier position. For it remains unclear whether the required methodological self-reference is grounded within nature or without. He suggests that the latter is ultimately the case, that the sort of auto-affection implied by Merleau-Ponty’s ‘radical reflection’ hinges on his account of the ‘tacit cogito,’ an account which Toadvine reads—somewhat uncharitably, perhaps, given certain countervailing indications—as positing a “retreat of non-being” that breaks with our natural being (74), and hence as not effecting any significant progress with regard to the philosophical problem of nature.

The next two chapters (versions of which have appeared previously) deal with different ‘paths of transition’ between these early works and Merleau-Ponty’s later work, in particular, the unfinished manuscript of The Visible and the Invisible. They thus serve to illustrate how Merleau-Ponty tried to work through the paradoxical tension inherent to the very idea of a phenomenology of nature in order to discharge more fully and consistently the spirit, so to speak, of the ‘methodological reversal,’ and hence to formulate a more nuanced ‘a-subjective’ approach to nature.

In Chapter 3, “Animality,” Toadvine looks at Merleau-Ponty’s phenomenological approach to the theme of animal life, in particular as this is dealt with in his lectures on nature at the Collège de France in the late 1950s. Here Merleau-Ponty developed the intriguing ideas of a human-animal “Ineinander” or “intertwining,” and of an “interanimality” based upon lateral rather than hierarchical relations between human and non-human animal life. Whatever the ontological status of these claims may be, Toadvine takes them as implying a fundamentally new conception of the relation between mind and life, and therefore a fundamentally new conception of philosophical reflection as a corporeally-based manifestation of being’s own “self-interrogation.” (95)  In Chapter 4, “The Space of Intentionality and the Orientation of Being,” Toadvine takes up from Phenomenology of Perception some suggestive indications concerning a primordial level of spatialisation in order to argue that, rather than representing a break with nature, intentionality is directly a feature of nature itself. He then takes this ontological understanding of intentionality to support a view of the being of nature as fundamentally oriented, which in turn he takes as the decisive piece of evidence in support of the crucial claim, to wit, that nature is in its own right expressive (103), that it includes a tendency to self-expression of which human philosophical reflection is an extension, and upon which it is ontologically dependent. Taken together, then, the conclusions of these chapters effectively characterise the way in which Merleau-Ponty hoped that the phenomenological project could successfully escape from what Agamben more recently called ‘the anthropological machine.’

The fifth chapter, “The Human-Nature Chiasm,” explores Merleau-Ponty’s notion of ‘chiasm,’ with the particular aim of showing how the “expressive convergence” (122) of nature and culture can be understood as a chiasmatic relation, that is, as a “reversible movement of self-mediation.” (115)  This would replace the traditional dualism with a dehiscent or duplicitous ontology of ‘flesh’ wherein “being is not primordially self-identical but”—like the linguistic rendering of nature’s silent sense—“an event of originary non-difference.” (125)  Toadvine’s claim is that the logic of this expressive ontology, not despite but precisely in virtue of the ineliminable écart that it involves, “provides a compelling alternative to both naturalistic and constructivist approaches to nature, while accounting for the limited truth of each.” (109)

While the quality of Toadvine’s reading of Merleau-Ponty is first-rate, and while his general conclusion is philosophically sound, in that the ontological intertwining he describes could have significant positive consequences for contemporary environmental philosophy, it is unclear just how compelling its alternative chiasmatic logic would actually be in that context. For Merleau-Ponty provided but a cursory sketch which, pending extensive elaboration, amounts to little more than an invitation to regard reality in a radically new way by simultaneously recognizing “nature as the very embodiment of sense and being as equivalent to perceived being.” (134) This is a challenging view, to say the least, and it is unclear whether it could be effectively motivated among ecophilosophers, many of whom would baulk fervidly at the suggestion that “[t]o encounter nature…is also to creatively express it” (135)—and all the more so if, as is the case here, no clear line can be drawn between the expressed and its expression. But if one is concerned to rethink in a philosophically rigorous way the deeper issues at stake with respect to humanity’s relation to nature, and if one is unperturbed by the prospect of ambiguating anthropocentrism metaphysically rather than trying to dispose of it altogether, then one would do well to consider Toadvine’s stimulating reconstruction of Merleau-Ponty’s phenomenology of nature. For in addition to being a valuable contribution to Merleau-Ponty scholarship, it also lends support to the hope that there could actually be, at least in philosophical terms, a viable and productive response to the ‘ecological crisis’ of our times.