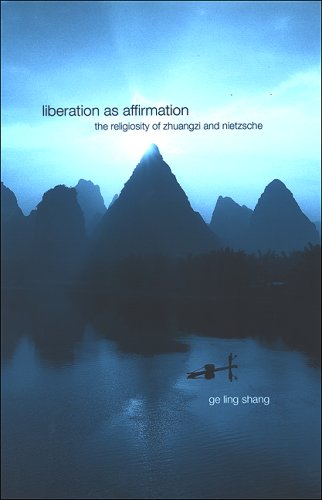 Ge Ling Shang’s comparative study of Zhuangzi and Nietzsche provides a unique perspective on the deep affinities shared by two philosophers separated by an immense span of time and space.  Shang moves beyond a superficial treatment of the similarities inherent in their deconstructions of metaphysics, language and morality to identify a common motivation behind their critical projects, namely, a deep concern with human liberation through the affirmation of life.  Their shared religiosity, defined broadly as a profound appreciation for the sacred or sublime, is presented as the guiding thread orienting their deconstruction toward an ultimate purpose, preventing destruction from becoming nihilism.  The book is straightforwardly organised in five chapters. After a brief introduction to the overall project, Shang devotes a chapter each to the examination of Zhuangzi and Nietzsche before moving on to a comparative study in Chapter 4.  Chapter 5 explores the impact of their life-affirming philosophical strategy on post-modern philosophy and contemporary Chinese thought, and it elaborates the value of the concept of philosophical religiosity as a means of achieving a “fusion of horizons” between philosophy and religion. (161)

The stage is set with an analysis of the concept of Dao or the Way.  In traditional Chinese thought, Dao is understood as the path or key to right living in harmony with nature, so that a thinker’s conception of Dao constitutes the central premise or goal ordering a system of beliefs and practices.  Dao quickly took on a metaphysical significance as the origin, principle or ultimate reality behind the apparent world of flux and the social disorder that characterised the intellectual golden age of pre-Qin China (600–221 BCE).  Shang lays out his interpretation of Zhuangzi’s philosophy against the background of a traditional Chinese reading that largely overlooks or misunderstands the radical divergence of Zhuangzi’s concept of Dao from mainstream Chinese philosophy.  Zhuangzi’s thoroughgoing rejection of a metaphysical construction of Dao corresponds to an emancipatory project that sees fixation on any particular idea of Dao as an artificial constraint on human spontaneity, preventing us from living in harmony with our own true nature.

Through a close textual analysis, Shang argues that Zhuangzi’s Dao, far from being a mere appropriation of Laozi’s concept of Dao as the primordial Non-being that gives rise to the world of being, in fact represents a rejection of this metaphysical dualism and a collapsing of the dichotomies created by limited human perspectives to stabilise and navigate the constantly changing world we inhabit.  Dao is not a transcendent reality opposed to the world of things; rather, Dao is simply the spontaneous becoming and transforming of things themselves, following their own nature (ziran) all by themselves.  It is no-thing or no-nothing (wuwu) in the sense that there is nothing at all guiding or shaping reality behind the apparent world we experience, no secret nature that we must discover or to which we ought to conform.  This in turn means that to live in accordance with the Dao is to act spontaneously, to avoid becoming constrained by the limited perspectives established by the pursuit of knowledge, the fixity of words and the conventions of morality.  Thus, Shang argues, “Zhuangzi’s deconstruction of metaphysics is actually motivated by his religiosity, his ultimate concern of freeing one’s mind, rather than his philosophical interest.” (29)

On Shang’s interpretation, one can easily see the parallel between Zhuangzi’s conception of Dao as identical with the totality of nature and Nietzsche’s rejection of the “true world” posited by Western metaphysics and opposed to the actual world in which we live.  Leaving Zhuangzi aside, Shang presents a thematic exposition centred on what he sees as Nietzsche’s most fundamental project, his “revaluation of all values,” employing the interpretive horizon of religiosity in order to bring out the spiritual tone of Nietzsche’s work without embroiling it in contradictions.  Returning often to the guiding thread of religiosity, Shang contextualises Nietzsche’s attacks on knowledge, language and morality and shows how they result not in nihilism but in the affirmation of the world of limited perspectives and of continuous change that we live in—the world that is denied when a metaphysical interpretation of the world sets up a “true world” opposed to the “apparent” one.  This affirmation is crystallised for Shang in the story of eternal recurrence: “It is in this ‘great cultivating idea’…that I have found Nietzsche’s religious or spiritual perspective, which has been hidden or invisible from most readers.  The very meaning of the idea of eternal recurrence is to live and to affirm, to say Yes to life religiously and fervently.… What this idea of eternal recurrence intended to elicit is much more like a ‘religious’ commitment, an ultimate enlightenment and spiritual liberation, than merely a philosophical interrogation of what life is or is supposed to be.” (100–01)

Though he highlights the parallels between the two thinkers, Shang carefully preserves their differences both in absolute terms and against the background of their differing cultures.  In Chapter 4, perhaps the most fascinating chapter in the book, Shang puts Nietzsche and Zhuangzi in dialogue, playing their alternate formulations and prescriptions off one another.  The result is a seemingly effortless meditation on two possible responses to the same spiritual impulse in which the conceptual advantages of each approach can be brought to bear on the other.

Shang’s treatment of Chinese concepts and words deserves special recognition.  Patiently teasing out the historical accretion of meanings associated with Chinese terms and explicating the particular philosophical context in which they are found, Shang is able to exhibit shades of meaning that allow us to grasp the subtle contrasts in Zhuangzi that result in radical divergence from the mainstream Daoist view.  He then blends English grammatical features with clarified and multifaceted Chinese words in an intuitive fashion, bringing us closer to Chinese ways of thinking.  Especially valuable for the Western reader is the way in which foreign concepts like Dao or ziran are made philosophically available through their application to a familiar context in Nietzsche.

Liberation as Affirmation combines clear exposition and precise textual analysis with a striking internal coherence based on the central theme of religiosity. Building on his comprehensive account of Nietzsche’s and Zhuangzi’s similar projects of life affirmation, the book goes on to offer an application of their insights to contemporary problems.  In this suggestive final chapter, the motivation to human liberation is presented as a counterweight to the nihilistic tendencies of Derridean post-modern philosophy.  Shang points out that by attending to the unconventional religiosity at work in Nietzsche and Zhuangzi, we gain access to the unique concept of the sacredness of life that lends passion to existence and aims at a liberation beyond what Derridean deconstruction can provide: “Deconstruction is an academic enterprise, not a philosophy of life, not a philosophy that has implications for human living.” (146)  The book also opens up promising new avenues for Chinese thought.  Philosophical religiosity, understood as a critical method in Nietzsche and Zhuangzi, can help articulate the philosophical and religious elements that are tied up together in the Chinese intellectual context, disentangling the conventional idea of Dao from its metaphysical underpinnings.  Shang’s reappraisal of Zhuangzi’s spiritual orientation as well as his balanced account of Nietzsche’s anti-metaphysical project, often overlooked by Chinese scholarship (152–53), offers a range of new options to an ancient culture struggling to revise its identity while reconnecting with its past.