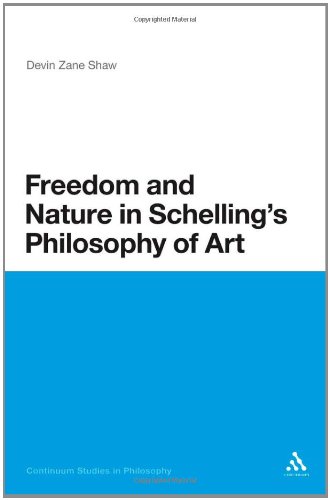 Perhaps the most enigmatic feature of the deeply enigmatic philosophy of F.W.J. Schelling is his celebration of art. It is clear that art and the aesthetic dimensions of human experience are important for Schelling. It is also clear that the way Schelling understands the significance of art changes several times during his career. Because of this, commentators have consistently found Schelling’s ideas about art to be full of insight and lasting relevance, but none has ever attempted to make art a unifying theme in a study of Schelling’s development in general. For this reason, Devin Zane Shaw’s recent book is a novel contribution to Schelling studies. The text is presented as an account of the development of Schelling’s thinking from 1795 until about 1807, a bold undertaking given the many influences shaping Schelling’s unique career. Marked by careful textual exegesis and an original thesis, Shaw’s book proposes to take Schelling’s changing views about art and use them to gain insight into Schelling’s thinking as a whole.

The book begins with an analysis of one of Schelling’s earliest philosophical efforts, and the place where aesthetics first makes its appearance as an important theme in Schelling’s work. The complex historical context of the Philosophical Letters on Dogmatism and Criticism make it a difficult text, but Shaw uses its complexity to argue that Schelling’s conflicting commitments combine to create an ambiguity about the very topic of consideration, the absolute. According to Shaw, Schelling’s allegiance to Fichte compels an idea of the absolute as an object of practical striving, and his intoxication with Spinoza inspires a conception of the absolute as beyond both subject and object. Yet I wonder whether it is fair to suggest that this amounts to an ambiguity on Schelling’s part. Given that the immediate context for the Letters is Schelling’s concern to dismiss the pseudo-Kantianism of the Tübingen theologians, it seems wrong to claim that these two perspectives on the absolute are inconsistent. After all, on Schelling’s thinking, a necessary condition for the absolute’s functioning as an object of practical striving is that it be beyond subject and object, that it never be fully achieved. The Tübingen theologians take the absolute to have theoretical existence and only propose the ‘Kantian’ practical solution because they take reason to be ill-equipped for such theoretical knowledge. The error of this approach is to ignore the creative function of postulation as a demand for action. Accordingly, the positive component of Schelling’s alternative consists in the idea that a truly practical solution places the absolute beyond subject and object by making its existence contingent upon infinite practical action.

Focused on the development of Schelling’s notorious nature philosophy, the crux of the second chapter is its concluding section on Schelling’s remarks about art and aesthetics in the period before 1800. Shaw’s strategy is to read Schelling’s Ideas for a Philosophy of Nature together with the periodically published Survey, and this enables him to do a couple of important things. First, he is able to provide a coherent picture of the relationship between Schelling’s appropriation of the work of Spinoza and Leibniz, and his reliance on Kant’s teleology. But much more significant from the perspective of the book is that this permits Shaw to show that even at this early stage Schelling uses art as a way to unify nature philosophy and the philosophy of history in a single system. Shaw will even remark in the third chapter that since Schelling’s idealism includes the claim that the higher begets the lower, even the philosophy of nature rests on aesthetic intuition (76), a strange thing to say given that productivity in nature is without consciousness, and this, according to Shaw’s own oft-stated conditions of Schelling’s philosophy of art (3, 87, 145), would exclude nature philosophy. Aside from such ambiguous remarks, the important point is that the philosophy of art, specifically mythology and poetry, can embrace the perspectives of nature and history, theory and practice to catch a glimpse of the whole.

This brings us to the famous System of Transcendental Idealism, whose interpretation forms a kind of conceptual heart for the book. Shaw reads the text as “a transcendental reconstruction of the conditions necessary for the self to recognize itself as producing objectively” (66), and he interprets this process of transcendental reconstruction as a creative one. One of the crucial theses of Shaw’s book as a whole is that for Schelling art is not something about which philosophers develop a “philosophy of art,” like, as Shaw puts it, “a philosophy of vehicles or a philosophy of agriculture.” (99)  On the contrary, art is significant for philosophy itself; that is, art is a mode of access to the absolute, and as such it is part of any complete system of philosophy. This point becomes increasingly important as Shaw’s analysis progresses. But applied to the 1800 System the thing to note is that this reading provides a corrective to the all-too-common interpretation that art is somehow external to the system, beyond philosophy—at one point Shaw even refers to Schelling’s aesthetics as “art-philosophy.” (63) Shaw rightly points out that for Schelling the activity of imagination is a kind of thread that unifies theory, practice and aesthetics across a single trajectory. On this fresh reading, aesthetics pervades the entire system. For Schelling, the philosophy of art opens up a whole new realm for philosophy; it makes good, as Shaw argues, on the promise of the System-Programme to return “philosophy to its origins in poetry and mythology.” (83)

The focus on the imagination as that which holds the parts of the System together in a unified whole is finally what enables Shaw to trace a continuity between the role of art in the System, the later lectures on the Philosophy of Art and the so-called Münchener Rede. Instead of the common story about Schelling abandoning the transcendental idealism of the 1800 System for the standpoint of absolute reason, Shaw argues that despite the change in metaphysics the imagination maintains its role as the activity through which the ideal, or the infinite, is made manifest as real in the finite world. There are of course several important differences that characterize Schelling’s various treatments of art during this period, differences to which Shaw is particularly sensitive. But the real novelty of Shaw’s book is that he detects continuity in all of Schelling’s efforts to incorporate art into a system. Whether from the standpoint of transcendental idealism and nature philosophy, the standpoint of the absolute in Schelling’s identity philosophy, or the historical perspective of Schelling’s later Münchener Rede, art invariably serves a revelatory function in disclosing the most complete picture of the whole.

Also significant is that Shaw isolates a political significance of art that, beginning with the System-Programme, seems to animate Schelling’s thinking. Given that Schelling never produced a political theory, it might seem strange to suggest that such concerns animate some of his most significant philosophical efforts. But Shaw makes a compelling case. Indeed, it is perhaps a testament to the effectiveness of Shaw’s thesis that the reader is left wanting more; left, that is, wondering what a more rigorous study of Schelling’s political commitments would reveal about Schelling’s work in general. In the end, Shaw argues that the role of art is always political, always providing a way for people to participate in the moral legitimization of the state.

It is undeniable that this fresh reading of Schelling’s philosophical development flies in the face of the still-pervasive Kant-Fichte-Schelling-Hegel interpretive key. And there are probably several scholars who will want to resist Shaw’s focus on art as a defining feature of Schelling’s work as a whole. There is good reason to think, for instance, that Shaw’s interpretation of Schelling’s nature philosophy unwisely ignores the scientific research and practice that forms the rich historical context of Schelling’s thinking at this time. To propose an account of Schelling’s philosophical development and to ignore these formative influences is arguably to have abandoned the development project in which Shaw claims to be engaged. This does not mean the book is misleading. But it does mean that one must take its claims to have provided an account of the development of Schelling’s thought with a grain of salt. In the end, Shaw’s careful analysis of the various ways in which art is significant for Schelling provides a sorely-needed guide for readers of Schelling’s difficult work.