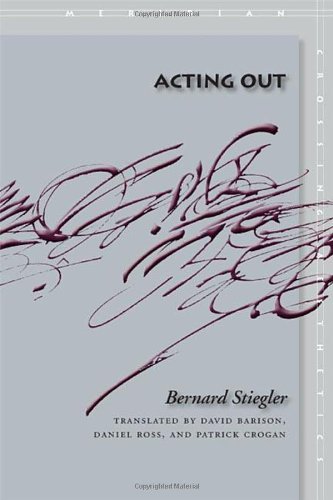 Review by Maxwell Kennel, University of Waterloo. Published in Symposium 15:2 (2011).

Arising after the deaths of Jacques Derrida and Gilles Deleuze, Bernard Stiegler has become an important name in contemporary French philosophy. Situated between younger philosophers in France such as Quentin Meillassoux or Mehdi Belhaj Kacem, and the older group such as François Laruelle or Alain Badiou, Stiegler has quickly gained a large readership in Europe and North America. The book Acting Out may appear to be a footnote to Stiegler’s three part magnum opus Technics and Time, but the small anthology of only two essays provides the reader with incredible insight into not only Stiegler’s philosophical project but also his biography.

The two essays that make up Acting Out are “How I Became a Philosopher” and “To Love, To Love Me, To Love Us.” The first essay, which was delivered at the Centre Georges-Pompidou on April 23rd 2003, provides the reader with a look into the unusual beginnings of Stiegler’s now prolific career. “How I Became a Philosopher” outlines several aspects of Stiegler’s philosophy in the context of his personal experience during a five-year period of imprisonment for armed robbery. It is rare in philosophical discourse to witness a thinker who appears to have come forth out of a singular event, yet it seems that for Stiegler philosophy and biography are inextricably linked, and that his story properly began during his time in incarceration. We are witnesses to the prolific philosophical output of Stiegler since the first volume of Technics and Time in 1994, but we also learn that that Stiegler is the founder of the political group “Ars Industrialis” and has recently founded a school of philosophy in Épineuil-le-Fleuriel.

Whereas the first essay deals with the link between Stiegler’s philosophy and his biography, the second puts the link between theory and appearances into practice, providing an analysis of Richard Durn’s 2002 shooting in Nanterre. In “To Love, To Love Me, To Love Us” Stiegler examines the problem of the “loss of individuation” and the primordial narcissism of the perpetrator Richard Durn. (39) It was made evident in the publication of his journals that the shooter was struggling with what Stiegler calls an “immense nothing,” or what Durn himself called a feeling of not existing, which could only be mitigated by an act of violence. (39) Stiegler proceeds to examine in detail the theme of individuation by way of “human time” which “articulates the I with the we.” (43)  For Stiegler our humanity is contingent upon our involvement in a social group which further constitutes human time or temporalization. The articulation of the individual with the collective, by way of human time, is also pertinent to Stiegler’s discussions of technology, which itself overdetermines individuation.

This relationship between technics and time is certainly the focus of Stiegler’s greater oeuvre, where Stiegler concerns himself at certain points with the nature of technology as pharmakon, or that which poisons and heals simultaneously. In Volume One of Technics and Time, titled The Fault of Epimetheus, Stiegler explores question of the technical object alongside an attempt to “conjugate the question of technics with the question of time.” In the comparison between Prometheus and Epimetheus, Stiegler finds that technology gives way to a thanatology (a point discussed at length in Marcel O’Gorman’s interview with Stiegler forthcoming in Configurations). Volume Two of Technics and Time, titled Disorientation, provides a more pointed examination of technology (such as television), thanatology, and Roland Barthes’ concept of mortification from his book Camera Lucida. The multi-volume Technics and Time, although referenced several times in Acting Out, should be treated as its theoretical correspondent, as Davin Heckman points out in his review of Acting Out in Reconstruction 9.1. Although the three volumes of Technics and Time may dwarf Acting Out I would argue that Stiegler’s theoretical output is grounded in the formative five years of his life that are described in the first essay of Acting Out, and then contextualized in the critique of culture seen in the second essay.

In order to provide at least some closing context it should be mentioned that the title, Acting Out, is a translation of the French phrase “passer à l’acte,” which refers to a fairly complex psychoanalytic understanding of the move from repression to action. (8) Early in the work Stiegler describes the way in which he made an exception of himself and devoted his life to “being something rare.” (2)  After some discussion of individuation Stiegler professes that his passer à l’acte resulted in a five-year period of not only incarceration, as mentioned above, but of transformation into his vocation as a philosopher. (11)  Stiegler spent the majority of his time in prison studying philosophy, literature, and poetry, in part under the tutelage of Gérard Granel, who witnessed Stiegler being transformed by a “singular experience.” (22)

While Stiegler’s overall project is difficult to capture because of the scope of his philosophical engagements and his political activities, his philosophical pursuits addressed in Acting Out and developed in Technics and Time can be said to be centered on the question of the process of individuation defined by the interaction between the “I” and the “We” and the temporal conditioning of this relationship by technics. On the whole, Acting Out provides a good introduction to the work of Bernard Stiegler because of its accessibility, length, and the richness of its insight as it leads into the larger questions of Technics and Time.