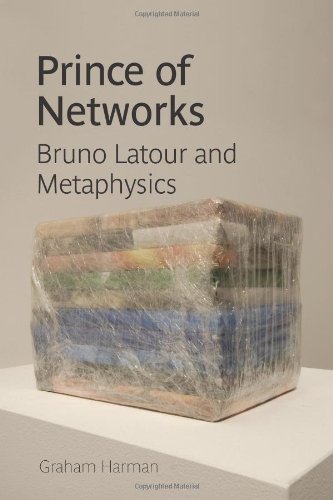 Bruno Latour has long been a specter hovering on the edges of recent Continental philosophy: his work is cited frequently enough to accord him the (sometimes dubious) status of famous French philosopher, but he tends to fall as a shadow figure outshined by his contemporaries. Readers have long not known what to make of him. For some, he is a relativist worthy of scorn alongside other “postmodern” philosophers such as Jacques Derrida and Jean-François Lyotard. For others, his theory of assemblages is excessively ensconced in science studies, making him too tricky a philosopher to meld easily alongside the more literary bent of his peers. Latour’s prose is part of the problem, since he purposely crosses a number of academic fields—writing on nature, the social, and semiotics together—that have been treated as wholly separate enterprises in the French academy and elsewhere. The work under review delves deeper than his work in these fields to ascertain the metaphysics operative in his “actor-network theory.”

Harman’s book should have the effect of moving Latour center-stage in discussions on the future of Continental philosophy. Prince of Networks is divided into two parts, and this division of labor means that readers of Harman’s previous works will likely head for Part II, while those looking to figure out just what has been lurking in Latour’s writings are going to find much to like in the work’s first half. In the first chapter, Harman covers Latour’s “irreductionist” approach to reality, and then moves in the proceeding chapters to describe how this metaphysics bears fruit in terms of Latour’s sociology of science. In the second half of the book, Harman lays claim to Latour as an “object-oriented” philosopher, an area of the contemporary scene that Harman has in previous books championed. This is where Harman’s book enters its critical stage.

Latour’s fundamental claim is to a relational realism, one that argues against any hidden essence behind the appearance of things. Each thing, as such, is but a “black box” that is to be broken into by the theorist in order to tease out the relations that tie each given thing to a whole range of other things. In his Laboratory Life: The Construction of Scientific Fast (1986) and The Pasteurization of France (1988), Latour argued for thinking the reality of scientific facts in terms of the network of alliances made among the various objects of the laboratory, the scientists undertaking a given study, and the facts the arise out of these interactions.

Latour claims that there is no scientific set of facts that is not borne from a trial of strength made among a set of figures, including the apparatuses of the scientific profession. This is where the charge of “social constructionism” often enters the scene, since Latour argues that bacteria, for example, did not pre-exist Pasteur’s discoveries, since their “reality” is only thinkable through the set of relations brought about by Pasteur’s discovery. For Latour, these set of facts are but another actant (what we normally call objects) among others, and he argues, as Harman notes, that “all entities are on the same ontological footing.” (14) Thus, Pasteur’s bacteria are not real until they enter into alliances, though presumably Latour would have to argue more precisely that the bacteria were previously “real” as actants in relation to other organisms and whatever else to which they related before becoming another fact of human knowledge. Pasteur’s discovery, though, was not an objective fact, but itself was thrown into relation in “trials of strength” among other biological ideas at the time, and he was but one actor in a series of alliances among “might politicians who grant him funding, pieces of glassy or metallic equipment, and even bacilli themselves.” (19) This discovery becomes more “true” through the ever-expanding alliances this crucial idea of modern medicine would have. “Against the traditional gesture of isolating the real from all its distorting associations,” Harman writes, “Latour holds that a thing becomes increasingly real the more associations it has.” (75) Harman will defend Latour time and again from the charge that he is a “relativist, a power politician, or a social constructionist,” but it is hard to see how scientific realists will take any comfort in the “construction” of scientific facts coming from both the social and the things of nature, instead of just a given cultural assemblage.

What should be clear by now is that Latour’s account does not leave room for some unseen Platonic realm where entities hide without relations waiting for their day in the sun. But this does not mean that Latour is not a realist, since his argument is that the relation to the human being, or between human beings and the world, is but one set of relations among others; that is, it is independent of human concerns. Of course, human beings confront things, translate them (you describe things to others), and reduce them (you use your CD collection for music, not coasters) to one level of reality, but this too is just what actants do to one another: fire burns cotton, while other levels of reality interact that are no less real. To trace any x, one must work out its “hybrid existence” as a set of relations within ever-widening networks: “to follow a quasi-object,” Latour writes in We have Never Been Modern, “is to trace a network.” (64)

This is Latour’s key idea of “irreductionism,” and Harman’s first chapter marks out well just how much our philosophical landscape would be upended if Latour’s own work were to make many more alliances. What one finds is an “actualism” that can grant reality only to the shifting relations of the world and not to hidden forces that hide without relating to the things of existence. What is more is that Latour, since he cannot grant reality to anything that is not acting upon other things, must give the same level of reality to accidents (color, shape, size, etc.) as to the thing itself.

The question that Harman introduces in the second part of Prince of Networks is whether such an actualism can account for change. To use my own example, Latour offers a relationism with nothing between or among the different alliances, which is like trying to imagine bouncing balls suddenly shifting directions even when hitting nothing at all. Harman thinks that Latour’s irreductionist account must be supplemented with a thinking of the “interiority” of objects, which he argues is the “something more” to things beyond their relations.

What Harman gains from Latour is greater traction for his critique of the “philosophies of human access,” such as one finds in Kantianism or philosophies after the linguistic turn that see languages and conceptual schemes as the prison-house holding human beings from the world. (103) Thus, Harman parts ways from Latour to argue that there are “things” beyond any given set of relations: “an actor must already exist if other actors are to exist in the first place.” (111) In this way, for example, the microbes of the type discovered by Pasteur must have some kind of existence before their discovery, even if, crucially for Harman, this means that this “latent substance hidden from public view beneath an actor’s overt performance” is literally indescribable, since it has not yet made such alliances (namely the alliances of publicity). Another way to put this is that Harman argues that “a thing is real beyond its conditions of accessibility,” even if this “access” is not only made by human beings, but by other things as well. “Things,” he writes, “must be partially separated from their mutual articulations. If this were not the case, they would never be able to enter new propositions.” (131)

The story of just what to think of these “things” means following Harman down a busy road littered with signposts to the works of Leibniz, Husserl, Merleau-Ponty, and others. For my part, I am likely to get off at certain places where I sense the hyperbole Harman uses against would-be allies is too strong. For example, Derrida and Foucault come in for withering asides, but surely there is room to think Latour alongside Foucaultian notions of apparatuses of power, or against Derrida’s relational thinking. These thinkers will do no more, I suspect for Harman, than Latour’s relationism, but it leaves one wondering what the criteria is used to make Latour a realist, while others remain pseudo-skeptics unable to escape linguistic discourses to see the world around us, other than Latour simply stating such. Put otherwise, as Harman’s object-oriented project grows in the coming years, perhaps there are as-yet unseen alliances that could strengthen this developing theoretical network.

This is in the end a minor quibble. Harman’s writing is clear and purposely vivid. If there is a clichéd example that comes to mind, Harman is likely to opt for one involving Civil War battlefields or self-whipping nuns. I could think of no better companion to ally myself with in reading through the underutilised texts of Latour. This book, I imagine, will also cut down on the abuses of mentions of actor-network theory by those who misunderstand Latour’s basic premises, since his would-be allies in sociology and elsewhere often describe him as a protean thinker of power. Lastly, it would be wrong to end this review without mentioning the networked existence of the book under review, which the publisher, re.press, along with its whole catalogue of books, allows to be downloaded for free online, while regular printed versions are sold through its website and booksellers. A book on relational ontologies (with “something more”) deserves just such a home.