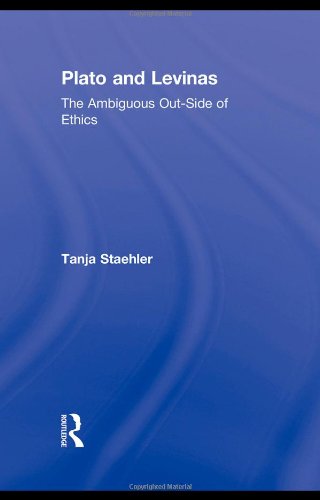 Levinas’ thought is known as one of extremes, radically separating self from other, singularity from universality, and ethics from overarching political structures and philosophical concepts. A critical question that often arises is how one can move from one extreme to the other if they are indeed so radically separate. There is no doubt that for Levinas these extremes are intimately related, co-conditioning each other through an odd combination of potential exclusion and interruption. However, one often gets the sense that intermediary phenomena—which could help us to understand the relation between extremes and the relation of these extremes to our everyday lives—are either lacking or do not receive enough attention in Levinas’ writings. It is into this ambiguous in-between space of Levinas’ thought that Tanja Staehler takes us in her original and thought-provoking book, Plato and Levinas. The Ambiguous Out-Side of Ethics. Focussing on erotic love, art, and politics, Staehler brings to the fore both the explicit and latent possibilities for thinking ambiguity in Levinas through a creative confrontation of his thought with Plato and the 20th-century phenomenological tradition. In the process, a less radical, but perhaps more believable Levinas unfolds before the reader’s eyes.

The book is divided into four parts, developing Levinas’ conception of the self or interiority in Part I, his approach to the other and ethics in Part II, the movement from ethics to a universal “politics” in Part III, and the place of art, history, and culture in Part IV. A word of advice to the reader: Though the first two parts of the book might at first glance appear to reiterate material that has already been extensively covered in Levinas scholarship, Staehler’s insightful reading of interiority against the backdrop of Plato’s Myth of Gyges, the prominent place she gives to the body, and her interesting interpretation of apology in Levinas along the lines of Socratic apology are all well worth one’s time. The true heart of her book and its most important contributions, however, lie in her reflections on politics, history, and culture in the second half of the book, and in her concluding—highly creative—“genealogy of ambiguity.”

In broaching the topic of politics, Staehler argues that “Levinas does not examine communities that are larger than two people yet smaller than all of humanity.” (149) In other words, Levinas has a tendency to jump in his thought from the ethical relationship between two singular beings to universal laws, concepts, and institutions relating all human beings. These latter are what are associated with politics and social justice in his thought. Yet, as Staehler rightly points out, most (if not all) political communities are not universal in tenor; Levinas thus seems to conflate universality and politics. (112)  To develop a richer sense of political community and to make room for the smaller familial, artistic, and cultural groupings that mediate between singularity and universality in actual human communities, Staehler suggests that we dwell on the sites of erotic, artistic, and political ambiguity in Levinas, and that we supplement his thought with a deeper reflection into his philosophical influences.

Of particular note is the influence of Plato. In a novel reading of the meaning of Levinas’ “return” to Platonism in his essay “Meaning and Sense,” Staehler presents us with a convincing picture of a Levinas both concerned with an ethics that calls for universality (following in the line of Plato’s “Good beyond being”) and aware of the unavoidability of some level of cultural and historical relativism. While this second direction is associated more readily with the existential and phenomenological tradition than Plato (even Levinas himself associates it to the “anti-Platonism” of his contemporaries), Staehler gives a reading of the relationship between philosophy, ethics, and politics in Plato that could provide an explanatory bridge from universality to relativism and particularity without necessarily overstepping the bounds of Levinas’ Platonism. Among others, she draws in her interpretation on: (i) the ambiguous relation between politics and philosophy across Plato’s various dialogues, comparing for instance Socrates’ claim to be a stranger to politics, and his call for a critical standpoint outside of politics in order to ensure justice in the Apology, to his vision of philosophers as the best suited to political rule in the Gorgias and Republic; (ii) Plato’s ambiguous position with respect to the writing of laws in the Statesman and to writing in general in the Phaedrus; and (iii) Plato’s separation in the Laws between what Staehler interprets as universally applicable, “quasi-ethical” laws and more particular and limited “political” laws.

Through this reading, it becomes apparent that Staehler interprets Plato as a quintessential philosopher of ambiguity, and she thinks some of the lacunae regarding ambiguity in Levinas’ thought can be resolved by deepening his Platonism. At the same time, she borrows from the phenomenological tradition in order to go further with ambiguity both within and beyond Levinas. Her analyses of history and culture in Chapter 11 offer some interesting food for thought. She argues for a more positive sense of history in Levinas, beyond his criticism of what he interprets as totalizing approaches to history in the phenomenological tradition, by drawing parallels between Heideggerian historicity and intersubjective time in Levinas and by suggesting that we look for Levinas’ conception of history in his approach to fecundity. (This last point is in fact addressed in some depth in the literature on erotic love and Judaism in Levinas, for example, in the works of Claire Elise Katz and Stéphane Mosès). Basing herself on Husserl’s distinction between “homeworlds” and “alienwords,” Staehler also draws the outline of a horizontal asymmetry and irreversibility between various historical-cultural communities that could come to complement the vertical asymmetry of Levinasian ethics.

In her final chapter, “Concluding Remarks on Ethics and Ambiguity,” Staehler brings together the many threads of her reflections in a diagnosis of the problem with ambiguity according to Levinas—ambiguous phenomena have a “tendency towards self-enclosure” (210)—and a “genealogy” of the ambiguity of erotic love, politics, and art as arising out of corporeality. Our corporeal nature is in fact both a source of power and independence for us, and a source of exposure, passivity, and vulnerability. Because we are vulnerable, we have a tendency to try to protect ourselves, to close ourselves off from what threatens us, or—what amounts to the same thing—to try to encompass unpredictable others into our projects and interests. One can observe this tendency, Staehler argues, directly in the erotic desire to possess the loved one, but also in political concerns to ensure a minimal level of material comfort and security for the members of a community, and (in a somewhat less direct way) in the material nature of artworks. Yet, the fragility of being embodied means that these ambiguous phenomena are never fully self-enclosed and protected, but always potentially open to exposure. This exposure is a danger—a potential exposure to harm, misinterpretation, and destruction. But it is also an openness to ethical criticism and interruption, to goodness in a Levinasian sense. For these reasons, Staehler thinks we should not overlook the importance of ambiguity in Levinas’ thought: even though he himself sometimes seems to be seeking an ultimate escape hatch from ambiguous phenomena, what he really wants, Staehler writes, is “to make us aware of the consequences that arise when these areas of life are cut off from ethics and left to themselves.” (208)

In sum, one might say of Staehler’s book that it remains constantly oriented by the spirit of Levinas’ thinking, while sometimes diverging somewhat from the precise letter—which is to be expected in any original piece of work. The issue of ambiguity is indeed central in Levinas, and becomes more and more prominent as one moves from his earlier to his later works. At the same time, the treatment in his thought of ambiguous phenomena such as love, art, and politics is often summary or seemingly contradictory (e.g. his various positions on eros). Clearly, more needs to be said, and Staehler’s book goes a long way in specifying this “more” through an engaging dialogue with Plato and the phenomenological tradition. One might contribute even further to this discussion by addressing in greater depth the ambiguity that comes to characterise the ethical relationship itself and its related terms—desire, proximity, “love without eros,” transcendence—in Levinas’ later works: ambiguity between God and il y a, sense and nonsense, goodness and madness.