Philippe Lacoue-Labarthe, Heidegger and the Politics of Poetry 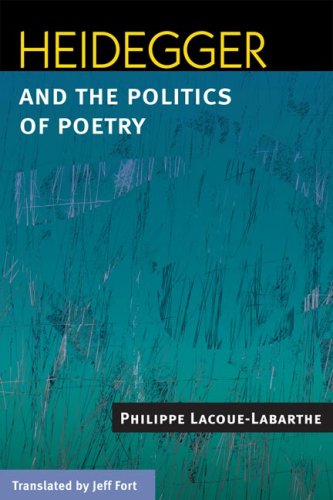 Heidegger and the Politics of Poetry, a collection of five lectures presented by Lacoue-Labarthe between the years 1987 and 1998, revised and edited by the author himself (and published in French in 2002), typifies what has become a prominent theme within French scholarship on Heidegger: the relationship between Heidegger’s political involvements and the overall arch of his thinking. Summarised coarsely, it is Lacoue-Labarthe’s contention that Heidegger’s engagement with German poetry (most notably that of Hölderlin) conceals an essentially scandalous and fascist tendency, one which overshadows his philosophical work as a whole.

The book, capably translated and helpfully annotated by Jeff Fort, begins with a citation from Introduction to Metaphysics, in which Heidegger explicitly names mythology as the way of thinking most appropriate to knowing a “primal history.” (3) Using this passage as his clue, Lacoue-Labarthe strives to show that Heidegger’s favouring of myth as a means of knowledge, most manifest in his readings of Hölderlin, echoes an “aesthetico-political” tone inherited from the philosophical/literary era of German Romanticism. The Romantics, which represent for Lacoue-Labarthe “the dream of an entire ‘German Ideology,’” sought to invent a new mythology with the express intent of bringing the German Volk into its “true historical dimension” or, in the Heideggerian idiom, of originally grounding historical Dasein. (4) Heidegger’s privileging of myth is yet another configuration of this Romantic drive to create a polis as a great work of art, a drive which found its most philosophical expression through Nietzsche, and its most horrific expression through the political activities of National Socialism. It is Heidegger’s unique privilege to be able to represent the braid of these two strands.

Lacoue-Labarthe is careful—as indeed one needs to be—to refer to Heidegger’s own efforts to distinguish himself from such a Romantic project and the philosophical and political forms that it assumes (see, for example, the Nietzsche lectures or the lectures on Der Ister). And yet, though “it is obviously impossible simply to confuse Heidegger’s positions with those of Nazism,” Lacoue-Labarthe nonetheless sees an essential affinity between them. (5) Although they do so differently, both Heidegger and National Socialism inherit the Romantic project of establishing a new mythology. In short, Heidegger’s use of myth, as was the Nazi’s, was fundamentally political and essentially fascist.

Whereas many have maintained that Heidegger’s treatment of poetry owes its nationalistic flavour to Heidegger’s political activities of the 1930s, Lacoue-Labarthe argues that Heidegger’s own privileging of the mythological arises out of an unreflectively inherited ideology. (34) According to his argument, Heidegger’s enthusiasm for myth does not result from his political participation with the National Socialists, but from an overdetermination of the Romantic exaltation of the political and religious power of myth. (14) Mythological thinking first, and only then political misadventure.

Lacoue-Labarthe extends this criticism by turning to Alain Badiou’s concern for the “suturing” of philosophy to poetry in his Manifesto for Philosophy, summarising the latter’s project as an effort “to make philosophy possible once again by taking a step beyond the declaration of its end.” (18) For Badiou, this would take place as a repetition of Plato’s exclusion (in Book III and X of the Republic) of poetry from philosophy proper, as an “unsuturing” of philosophy (by philosophy) from its preoccupation with poetry. Needless to say, such an “unsuturing” would work against Heidegger’s own thoughts concerning the “end of philosophy” and the role that poets play therein.

Although deferring a full “incrimination” of Badiou’s thesis, Lacoue-Labarthe marks a misunderstanding belonging to his overall project. Summarised briefly, Badiou overlooks the important fact that philosophy’s polemic with poetry, which constitutes the very origin of philosophy (25), is owed not to poetry itself, but to its ancient provenance—myth. (21) In other words, whereas Badiou believes philosophy to have sutured itself to the Poem (at least during “the age of poets”), Lacoue-Labarthe suggests that it is to the Mytheme that philosophy has historically sutured itself, and that such a suturing has brought about ineluctable consequences for poetry, philosophy, and politics alike. (23)

Philosophy’s refusal of the Mytheme, first undertaken by Plato, was repeated in the 18th century through the work of Immanuel Kant. Through his critique of metaphysics, Kant brought about “the first anamnesis of philosophy and, therefore, the first repercussion after the fact…of the Platonic decision” to expunge myth from the region (or, we might say, polis) of philosophy. (27) It is this anamnesis that prepared the reactionary ground for the Romantic project as seen, for example, in the anonymous call (likely offered by Schelling) for a new “mythology of reason.” (28) As Lacoue-Labarthe sees it, this Romantic pursuit of a new mythological religion led inevitably to the National Socialist politics of the 1930s, as well as to the poetic thinking of Heidegger.

However, the Kantian critique also paved the way for a different route, one that circumvents the final destination of Romanticism. This is the route prepared by Hölderlin, which, through meditating on the difference between the Romantic enthusiasm for Greece and the sober, prosaic clarity of presentation proper to the West, “ultimately forbids…every mythologization that would lead to the project of an immanent fashioning of a community.” (30) Phrased otherwise, Hölderlin offers a path that completely reconfigures the relationship between poetry, politics and philosophy and, therefore, adopts a different (and critical) orientation with respect to myth, an orientation that refuses the typographical role that Heidegger assigned to it. (10) In a word, Hölderlin sought a “de-mythologizing” of poetry. (76)

Lacoue-Labarthe then turns to a reading of Theodor Adorno and Walter Benjamin, who both offer interpretations of Hölderlin that work against Heidegger’s mythological project. Both Adorno and Benjamin locate a prosaic tendency within Hölderlin, a sobriety of style that Heidegger, “in bad faith,” ignores. (42) This sobriety works against the oblique epistemological function that Heidegger attributes to myth and plays out as a failure on the part of poetry to offer a mythological figure or type by means of which a historical people would recreate themselves. Hölderlin’s poetry is decidedly prosaic (that is, literal) in a manner that Heidegger refuses (58) and, thus, works against the enthusiasm for myth that Heidegger reads into it.

The final chapters offer a further analysis of Benjamin and of his bearing upon Heidegger. By comparing their readings of Hölderlin’s talk of the courage of poetry, Lacoue-Labarthe shows that whereas Heidegger reads Hölderlin as calling upon the Germans to enter heroically into a new mythology, Benjamin reads him as calling for the courage to leave behind the mythological. The courage of which Hölderlin speaks—and this is the culmination of his poetic route around German Romanticism and, thus, against Heidegger—is the courage to be sober and reserved in the face of the Romantic enthusiasm for a new mythology. Heidegger’s reading, the argument goes, is an archi-faschist one whose final destination is now so infamously known. Benjamin, on the contrary, in seeking a “literalization of the mythologeme,” saves both philosophy and poetry from the epistemological and political threat of the Mytheme. What Hölderlin allows us to see is that both philosophy and poetry ultimately refuse the Mytheme and, thus, both seek a relationship with the Matheme. And it is for this reason that Lacoue-Labarthe claims at the outset that this book is “of a mathematical order.” (1)

This sometimes frenetic—or, to use his own description, schizophrenic (1)—book offers both an engaging interpretation of Heidegger’s poetic thinking and a compelling alternative to it, as well as a fairly damning picture of Heidegger’s thought as a whole. It is because of this later purpose—to present Heidegger’s thought as essentially fascist—that Lacoue-Labarthe’s book is tenuous. Due to the severity of the charge, this small book cannot but fail to offer large evidence to support it; and whereas some progress is made toward clarifying the relationship between Heidegger’s thought and the (un)thought of National Socialism, this book certainly does not prove that Heidegger was “the thinker of National Socialism,” as it sets out to. (83) Although Lacoue-Labarthe’s theses are engaging and suggestive, they require much more care and elaboration than they are given, as the author himself repeatedly insists.

At its worst moments, this text is a deferral: a series of bold statements adorned with brief (albeit interesting) evidence whose full elaboration is postponed to some future inquiry. (Nearly every section begins with a proviso that says as much. (12, 20, 27, 39, 85) In this sense, the book is a kind of path-marker, but by no means the path itself, and the strength of the book consists in its ability to call attention to these markers, setting its own limits as it does. In the end, this book is exactly what it promises to be: a series of reflections that are in no way exhaustive and that remain to be pursued carefully and rigorously. The gift of the text is that it leaves the task of undertaking such elaborations to us.