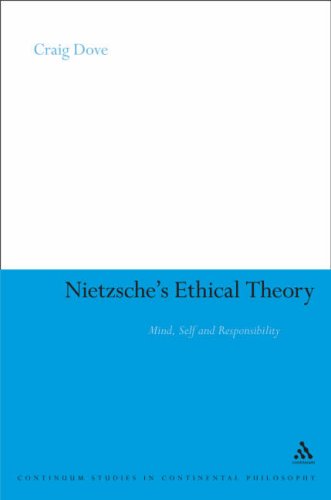 Nietzsche, according to Dove’s argument and thesis, has been misinterpreted.  He is neither the Über-critic of morality, as he is typically portrayed, nor is he a nihilist. The Übermensch, philosophising with a hammer, war and the warrior, etc., are positive suggestions that are not as untenable, repugnant or crazy as it might seem on a shallow reading.  Understanding Nietzsche, Dove reasons, requires an appreciation of the subtleties of his ideas; it requires a reading that appreciates his complex and positive views on self-consciousness and on the themes of becoming self-aware and the responsibility that this entails. (1–2) It is this reading that Nietzsche’s Ethical Theory seeks to bring to light.

In order to attain such a reading, Dove takes a rather unconventional approach: he turns to contemporary philosophy of mind (CPM) and argues that Nietzsche’s take on ethics can best be described in terms of CPM, as there are important points of contact between the two.  Dove explains his CPM foray into Nietzsche as such:

The work being done in cognitive science and philosophy of mind gives us a better understanding of consciousness, and has the potential to redefine meaning itself, and thus to redefine ethics along Nietzschean lines.  Nietzsche’s ethical theory demands that we cast off the responsibility that has been placed on us by traditional morality [and] forge our own understanding of the world in which we take responsibility. (10)

Theorists of CPM, he explains, seek to describe and explain accurately consciousness, and in this sense they share many underlying presuppositions with Nietzsche’s ethical position—a position that Dove situates within the question: “How can we understand and use our consciousness in such a way as to make it serve the instinct of life?” (4)  The deflationary and physiological approach CPM takes to describing consciousness’ immanent nature and origin, Dove claims, is consonant with the Nietzschean position that mind is neither a separate substance nor a mystic property, but “something” about the body (Dove quotes here “The Despisers of the Body” chapter from Thus Spoke Zarathustra.) (4)

Especially amenable to Nietzsche and his understanding of ethics, Dove writes, are the works of Paul Churchland and Daniel Dennet.  The former, through a look at the brain itself, is said to offer a radically reductive view of consciousness, supposedly echoing Nietzsche’s comparison between consciousness and digestion. The latter is said to use a doctrine of materialism in order to eliminate the residual dualism of the Cartesian theatre, following, so Dove claims, a similar course as Nietzsche, who disparages the will and refers to mental entities as illusions and mirages.  Both contemporary authors play a primary role in the text. Also appearing in Nietzsche’s Ethical Theory are Quine, Sellars, Goodman, Sterba and Held.

Nietzsche’s Ethical Theory is composed of six chapters.  The first chapter is an introduction to the work—much of which I have summarised here.  Chapter 2 provides a detailed analysis of Nietzsche’s doctrine of eternal recurrence.  Chapter 3 addresses and analyses what Dove argues is the positive content of amor fati, as it appears in the work of Nietzsche.  Chapter 4 offers an explanation of Nietzsche’s perspectivism and its basis in an understanding of the self. In this chapter, Dove also addresses how useful and insightful Nietzsche can be for contemporary philosophy of mind and illustrates a way in which Nietzsche’s account of meaning can be understood.  In Chapter 5, Dove demonstrates how too-social an account of ethics fails since it cannot give a useful account of the self.  Dennet’s view of the self is used by Dove to provide a proper theoretical background for the recognition of the self, a self which is said to mirror the Nietzschean version.  Chapter 6, the final chapter, addresses Nietzsche’s positive view of responsibility and ethics, and articulates what such a view entails.

Nietzsche’s Ethical Theory could be a valuable contribution to the exploration of Nietzschean philosophy and ethics, that is, if it remained with the general premise that Nietzsche requires a careful and subtle reading, a reading that appreciates his complex and positive views of self-consciousness, self-awareness and responsibility (for, in this, Dove’s text is significant.) But in its non-typical fashion of considering the perspective and place of Anglo-American philosophy in relation to Nietzsche and ethics, the text does little to help scholarship as it pertains to either. In fact, Dove himself may have provided the best assessment of his project since at one point he admits that the subject matter of CPM is foreign to Nietzsche, and its understanding of the “truths of the world” rests quite uneasily with Nietzsche’s ethical perspectivism. Dove’s interpretation is original, but, in my view, unsuccessful, primarily because it proceeds from a dubious if not untenable position when it simply equates Nietzsche and contemporary philosophy of mind.