Miguel Abensour, Democracy Against the State 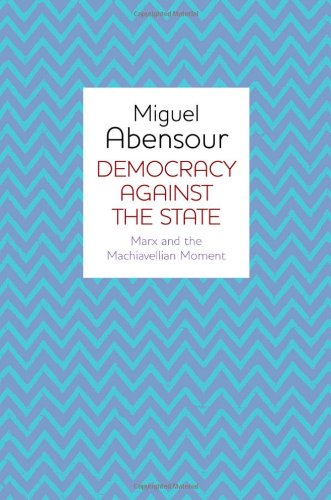 It is taken for granted today that calling a political practice utopian is synonymous with saying that it is impossible. Miguel Abensour has worked over the past several decades, as Coleridge would say, to de-synonymise these terms; he contends that, far from being anti-political,  utopianism is an important component of radical and emancipatory politics.

Abensour argues that emancipatory political practice is irreducible to, and in opposition to, the parliamentarianism of statist forms of democracy and the permutations of economism present in Marxism. In this regard, Abensour’s work shares many affinities with Jacques Rancière’s, from their respective attempts to rethink radical politics, to their critiques of Althusser. (Nevertheless, there are important differences between them: Rancière focuses on the politics—la politique—of equality, while Abensour deals with a utopian concept of the political—le politique.) For Rancière, politics, as dissensus, irrupts when the presupposition of the equality of intelligences and abilities is activated against regimes of inequality, in order to introduce new and more egalitarian ways of speaking, being and acting. Abensour’s political thought can be characterised much like his characterisation of Pierre Leroux’s: political praxis and theory work to democratise utopianism and utopianise democracy. Through this double movement, political practice “refuses the separation [found in early 19th century utopianism] between those who know and those who do not know, between the wise (sages) and the mad (insensés),” while thinking and practicing democracy otherwise than a political regime or parliamentarian enterprise. (L’homme est un animal utopique, Les éditions de la nuit, 2010, 91)

It is within this history—or project, to put the terms in the present tense—of utopian self-criticism that Abensour reads Marx’s Critique of Hegel’s Philosophy of Right (hereafter Critique), which is not to be mistaken with the well-known “Introduction” to “A Contribution to the Critique of Hegel’s Philosophy of Right” that was published in 1844. Marx’s Critique was written in 1843 but not published until 1927, and even then it was overshadowed by another text that was rediscovered and published in the early 20th century, the Economic and Philosophic Manuscripts of 1844. Abensour argues that the Critique introduces, under the concept of “true democracy,” a concept of the political that is irreducible to either economism or statism, which, while seemingly absent from much of Marx’s subsequent work, reemerges in a radicalised form in The Civil War in France. By proposing this subterranean current of anti-statist politics, Abensour aims to undermine the periodisation of Althusser’s claim that there is an epistemological break between the early Marx and the later Marx, between the young, Feuerbachian or Hegelian—and in any case ideological—Marx, and the scientific, dialectical materialist Marx who begins to emerge after settling accounts in The German Ideology of 1845.

Rather than situating the young Marx between Feuerbach and Hegel, Abensour asks how Marx confronts two directly political problems: utopian anti-statism and the problematic of the “Machiavellian moment” (a term Abensour appropriates from J.C.A. Pocock). The first few chapters of Democracy Against the State are dedicated to showing how Marx comes to conceive of an anti-statist “true democracy,” which has no antecedent in either Feuerbach’s quasi-religious “majestic” state or Hegel’s “bureaucratic solipsism.” (18, 41) The significance of the Machiavellian moment is less clear at the outset. In the early chapters it seems that the reference to Machiavelli is superimposed on the discussion of Marx, but the later chapters make it clear that Abensour associates a modern, anti-theological concept of the political with Machiavelli—with more of an emphasis on The Discourses than on The Prince. According to Abensour, Machiavelli breaks with classical political theory when he makes conflict the basis of political liberty, when he “makes discord and internal disunion—the struggle in Rome between the senate and the plebs—the origin and wellspring of Roman liberty.” (75) Yet this emphasis on discord does not make Abensour’s Machiavelli a liberal, for the centrality of conflict prevents the possibility that the opposing classes of society, characterised as those who desire to command and to oppress and those who desire liberty, could be peaceably reconciled into a self-present social body. (74) The politics of consensus is statist, while the politics of conflict or dissensus (in Rancière’s terms) is anti-statist. Hence for Abensour, the relationship between Marx, utopian anti-statism and the Machiavellian moment is more important than his relationship with Feuerbach and Hegel.

Abensour argues, in consequence, that Marx’s Critique is not concerned primarily with a political epistemology that seeks to settle accounts (be they ideological or scientific) with his predecessors. Instead, Marx engages what Abensour calls a “hermeneutics of emancipation,” in which “the task of the critic is to interpret every political question so as to translate the particular language of politics in the more ‘general’ language of emancipation.” (36) Marx’s reading of Hegel’s Philosophy of Right, then, turns on reconceptualising the political, beginning with the “real subject” of politics—the demos—and its activity.

Through a reading of Marx’s Critique, Abensour delineates four characteristics of “true democracy.” With the first two characteristics, Abensour underlines how democratic practices are the basis of the political rather than the state. Rather than being the “actuality of the ethical Idea” (Hegel’s Philosophy of Right, §257), the state is premised on political domination rather than participation. First, for Abensour, Marx opposes two concepts of political sovereignty: that of the monarchy (or any other political regime), which is premised on relations of domination and servitude (the sovereign reign over the people), and then that of the “sovereignty” of the demos. More specifically, for readers familiar with Giorgio Agamben’s Homo Sacer, I think that Abensour’s account suggests that the activity of the demos cannot be conceptualised as a form of sovereignty; instead, anti-statist democratic politics explicitly undermines state or sovereign power. Democratic praxis is defined in opposition to the state: as “democracy expands and experiences a real fullness of life, the State diminishes.” (2) Second, if the political is defined by the activity of the demos, then the state and constitution can no longer be considered as the determining factors of political space. Instead, Abensour argues, the demos determines the constitution of the political.

The third and fourth characteristics focus on democratic praxis, the “self-institution of an ongoing self-determination.” (58) The third characteristic is the most problematic. According to Abensour, Marx conceptualises democratic politics as an ongoing battle against political alienation, as an attempt to prevent the objectification of democratic life from becoming a reified and alienated expression of this life. This implies that for the young Marx, political praxis is thought as a project of continual self-presence. If the political subject—the demos—is conceived as self-present activity, this empties the concept of the political of temporality and alterity. (61)  Abensour proposes that appropriating Marx’s concept of the political today requires thinking praxis with temporality and with difference. On this point, Abensour introduces a Levinasian problematic of alterity and finitude, while I would suggest a problematic that turns on solidarity and dissensus in a manner similar to Rancière.

In any case, the fourth characteristic of true democracy conflicts with the idea that the demos must be reconciled as self-presence or self-identity. Democratic activity reduces the state to a “moment” of political life in order to open “the possibility for the democratic institution of every realm.” (64) This process of the “reduction” of the state has a negative and a positive moment. In the negative moment, the reduction defines the limits of the state: instead of imposing the organising form of state sovereignty over every part of society, the state is reduced or subordinated as only one part of society. This negative determination reduces the reach of the state, but it does not signal the end of politics. By curtailing the reifying and dominating effects of state power, democratic praxis makes possible a greater “fluidity” and plasticity—not to mention specificity—of social and political forms. The positive effect of the reduction is “opened by the democratic institution of society, such that the demos manifests and recognizes itself as demos in all realms of human life while respecting the specificity of each one.” (66)

After defining true democracy, Abensour examines how the Critique, this “fundamental text of democratic modernity,” fits within Marx’s larger oeuvre. Though Abensour concedes in part Althusser’s thesis that the epistemological project of a critique of political economy orients Marx’s thought after 1844-1845, he argues that the problem of the relation between democracy, the state and the political, which orients the Critique, remains as “a hidden and latent dimension of Marx’s writings, ready to resurge, susceptible to awaken by the shock of the event.” (84)  As a case in point, Abensour shows that Marx’s texts on the Paris Commune radicalise the conclusions found in the Critique. On the one hand, the “metaphysical” dimension of the demos or the working-class is abandoned: the political is thought as an antagonistic space rather than as the reconciliation the demos with itself in the fullness of self-presence. On the other hand, Marx amplifies the necessity of smashing the modern state. Given the direct opposition of democracy and the state, the possibility that a “reduction” or “withering” of the state could proceed as a gradual process must be rejected. The Paris Commune is “a permanent insurrection against the state apparatus, with the foreknowledge that, as it were, any fall under the hold of State power—whatever the name or tendency—would immediately signify its death sentence.” (87)

I find the link between the Critique and Marx’s later work on the Paris Commune to be compelling. However, Abensour concedes too much to Althusser’s problematic of the epistemological break when he opposes the political texts to the scientific texts. In fact, Abensour’s interpretive framework—the discussion of Marx’s “hermeneutics of emancipation” and political orientation—should be just as applicable to the critique of political economy. In addition to the political question, we should also investigate the ways in which Marx turned political economy into a weapon, as Harry Cleaver calls it, of working-class emancipation. When Abensour underlines how the Critique demonstrates that as “democracy expands and experiences a real fullness of life, the State diminishes,” we must also investigate how, “as democracy expands and experiences a real fullness of life, the power of capitalism diminishes.” (2) Nevertheless, Abensour’s Democracy Against the State is an important reconsideration of the political Marx.