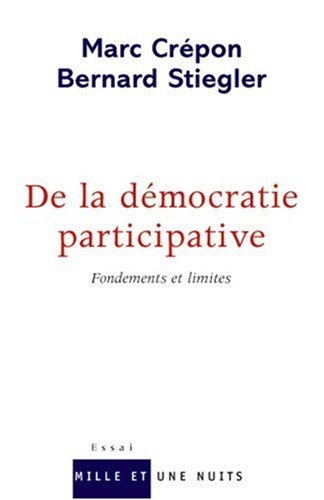 This year’s presidential elections in France, Russia, the United States, Yemen and elsewhere will happen at a time when protests in these countries and around the world show few signs of abating. Meanwhile, readers of contemporary French philosophy will find a hauntingly timely work in Marc Crépon and Bernard Stiegler’s still untranslated De la démocratie participative: Fondements et limites.  “The project of participatory democracy,” Crépon suggests, “is indistinguishable from listening [une écoute] prior to [democracy’s] eruptions,” coming eruptions which the authors describe as “protests” and “demonstrations.” (48–49)  The work—written in 2006 and 2007 out of a deep disappointment with the primary campaigns for the French presidency—is the attempt of Crépon and Stiegler “to reinstate participation at the core of a new political project” by considering new technological modes of political participation in contemporary democracy. (11)  It is also in some ways a continuation, a carrying on, of the “last texts” of Jacques Derrida. (27)

De la démocratie participative is foremost a critique of the two most obvious options available to citizens for participating in their democracies today: political representation and television.  As Marc Crépon writes in “Democracy in Default,” at the basis of our politics lies a “crisis of political representation,” a fact that can be measured by the increasing number of voter abstentions registered in the last French election. (25)  The dominant technological intermediary between representatives and the people, the television, has brought with it a kind of immunity from the concerns of the people: the absence of real debate, the censuring of free speech, the repetition of talking points, an inattention to protests, prepared questions, filters, and representatives that repeat what they are hearing on… television. (49–54)

This crisis in representation and its dominant technology, the television, leads Crépon and Stiegler to a more fundamental problem: the loss of participation in democracy. (88) There is a desire, they claim, unrecognised by the political and media elite, for citizens to engage in something shared with the collective.  There is an urgency to participate in democracy. (27)  Still, Crépon and Stiegler always consider this insight in conjunction with a reflection on contemporary technologies.  If television offers a closed and edited discourse, new technologies have opened new possibilities for participation and thus new models of democracy altogether.  It is not that the internet is a cure or salvation from our dire politics—far from it, says Stiegler—but rather that new technological means reconfigure the modes of discussion and open new, less biased and largely uncensored political forums. (84)  In contrast to the necessary individualism or what Stiegler calls the “symbolic misery” of the television, the internet “opens the possibility for…a reconstitution of the participatory condition without which there is no democracy.” (80)

Unlike the spectator of both the television and representative democracy, the internet user is capable of intervening in the political through participating in a shared, open forum.  Such a forum far more resembles the mode of discussions in the ancient Greek polis than the liberal and representative theories of democracy that surfaced in the modern era, Stiegler argues. (9–17)  This modern era was characterised by a loss of political participation and what Stiegler calls one’s general disconnection [déliaison] from society. (79)  Crépon targets and responds to one of liberal democracy’s major 20th-century works, Macpherson’s Principles and Limits of Liberal Democracy, while Stiegler offers a compelling review of his recent, prolific work, including his arsenal of concepts and his related work with the collective Ars Industrialis.

The work itself is divided into three essays by Stiegler, Crépon, and Stiegler respectively. In the Introduction (8–21), Stiegler begins by describing the context in which the work was written—the electoral campaign of the Parti Socialiste in France in 2006.  He then offers reasons for considering the theme of “participation” in democracy more broadly and philosophically.  Stiegler contrasts television and French populism with forums or spaces of participation, namely the Greek polis as the creation of a space of participation and those contemporary technologies that have created forums for participation once again.  The current text, he says, will attempt to reinstate “participation” at the core of a new political project. (11)  He explains that the present essays are the result of a special meeting of the collective Ars Industrialis and offers some of the core tenets of their manifesto.

In the second essay, “Democracy in Default” (24–57), Marc Crépon identifies our contemporary political problem as both “a default of power and a default of listening” to its citizens. (48)  He also outlines the technological and institutional reasons why democracy is in a state of failure, namely the irrelevance of both television and representation for true, participatory democracy.  Citing recent voting trends in France, Crépon notes that citizens do not feel heard by their representatives. (25)  Their viewpoints are not even represented in the dominant media of the day, the television, which Crépon describes as a rigorously orchestrated space of repetition that is made for “citizen-telespectators” rather than participants in a democracy. (54)  He targets liberalism in particular for equating democracy with the principles of modern capitalism and individualism. In the end, he tries to recover the Greek sense of democratic citizenship as one’s co-participation or taking part in the political.

In the third and final essay by Stiegler, titled “Français, encore une effort” (60–116), Stiegler composes an essay that places the theme of “participation” within the context of his work, resulting in a condensed, lucid survey of Stiegler’s philosophy in his own words.  Major concepts like “telecracy” and “symbolic misery” are explained alongside Stiegler’s critique of oligarchic media and liberal individualism or what he calls “disconnections” or “short-circuits.”  Stiegler summarises his thesis that new, collaborative technologies offer unedited spaces of individual and collective participation.  He also begins a debate with Jacques Rancière, claiming that these new milieus of participation—what Stiegler calls symbolic circuits or configurations—cannot be accounted for in the famous work of Rancière, which defines democracy as an aesthetic manifestation, but not a symbolic one (90–91).  Stiegler concludes with one of his major concerns about technology and contemporary democracy: that we are actually ruled by a telecracy. (100)

The three essays in this book are much more than two philosophers’ reflections on “participation.”  They articulate the contemporary “desire” for a new kind of politics altogether—a desire for “something else.” (27)  In writing this work ahead of the recent surge of protests and revolutions around the world, it indicates at the very least that these philosophers were indeed listening. Ultimately, their unique question is whether this desire for a different politics becomes a possibility through the technologies of our time.

But Crépon and Stiegler are equally clear that technology alone will not save us. And this is a final point that one wishes were underlined and developed further. For instance, in their compilation of Twitter messages from participants in Egypt’s revolution, Nadia Idle and Alex Nunns note that “the most compelling coverage [of the revolution] was on Twitter, coming directly from the people in the square.” (Idle and Nunns, Tweets from Tahrir, 13)  But while the “internet provided a tool that helped shape the form of the uprising,” they continue, what “has been described as a ‘Twitter Revolution’…was not.” The revolution was a tangible manifestation of people who “literally placed their bodies between tyranny and freedom.” (Tweets from Tahrir, 22)  To characterise it as an internet revolution ignores “the role of the working class which had been striking since 2006,” the activists who had been “mobilizing, forming groups, and holding small protests in the face of police brutality since at least the year 2000.” (Tweets from Tahrir, 22) If one must disagree then with Crépon and Stiegler, if one must in fact continue to protest, it would be only because the internet technologies they describe still have to be performed with our bodies. And thus despite the richness of this text—its timeliness, its originality, and its awareness of the contemporary debate over democracy in French philosophy—there are moments when even these extraordinarily tuned-in philosophers are still too distant from the material struggles, embodied suffering, and daily anxieties that make today’s citizens shout in the streets.