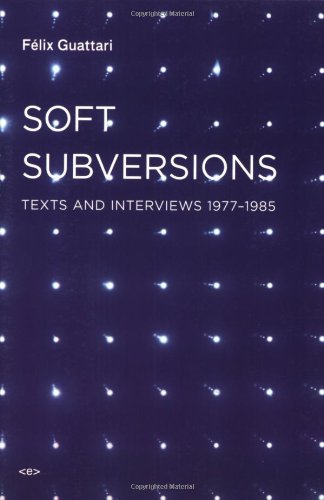 Review by Maxwell Kennel, University of Waterloo.  Published in Symposium 16:1 (2012).

The release of a second edition of Félix Guattari’s Soft Subversions might serve to indicate a rising interest in the work of the French psychoanalyst and philosopher. To confirm this indication we need only look to Talyor Adkins’ excellent translation of Guattari’s The Machinic Unconscious published by Semiotext(e) last year. Late in the coming year we can also expect a translation of his 1989 work, Cartographies Schizoanalytiques (Schizoanalytic Cartographies) from Continuum Press. The publication of The Guattari Effect, an anthology edited by Andrew Goffey and Éric Alliez, further confirms that there is a considerable increase in curiosity about Guattari’s work.

The new edition of Soft Subversions joins the new Semiotext(e) edition of Chaosophy (both edited by Sylvère Lotringer), as a reorganisation, systematisation, and supplement to the original editions of the two works. Whereas the new edition of Chaosophy contains texts from 1972 to 1977, the new edition of Soft Subversions contains texts from the years that follow, 1977 to 1985 (years which are described by Guattari as les années d’hiver). Seen in the light of other works like The Machinic Unconscious or Schizoanalytic Cartographies, Soft Subversions stands out as a more suitable entry point for those coming to Guattari for the first time (if one can even speak of a Guattari without Deleuze). Soft Subversions has all of the qualities of a good introduction: accessibility relative to his other works, short installments covering a period of several years, broad thematic content and a helpful introduction (courtesy of Charles J. Stivale).

The first chapter broaches what is an extremely important question not only for Guattari, but also for readers of Guattari: abstract vocabulary wrought with neologisms and textual gestures that are easily mistaken for elitism. Importantly, Stivale points out that Guattari’s technical arsenal of terms takes the form of a “minor language” (cf. Deleuze and Guattari, Kafka: Toward a Minor Literature) or “word-tools” that can be reformed and reshaped according to the needs of one’s theory. Instead of being intimidated by the use of new terms, the reader is assured within the first few pages of Soft Subversions that Guattari’s language is inventive and that this invention is no reason to turn tail and run for the supposed high ground of universal terminologies. Guattari writes that he does “not believe in universal literature or philosophy but rather in the virtues of minor languages.” (21)

Chapter 1, an interview with Robert Maggiore titled “I Am an Idea-Thief,” is a well-situated beginning to Section One, “Guattari by Himself.” By being introduced to Guattari’s thoughts on La Borde and Jean Oury in Chapter 2, “Institutional Intervention,” his childhood and upbringing in Chapter 3, “So What,” and Deleuze in Chapter 4, “Everywhere at Once,” the reader is given a broad idea of Guattari’s discursive situation. Section Two continues on this note by collecting several of Guattari’s writings and interviews on Italy, most important of which is an open letter on Antonio Negri and his supposed association with the Red Brigades.

The three chapters that build Section Three gather writings on the concept of the micro-revolution.  Chapter 10, “The Adolescent Revolution”, deals, as the title indicates, with micro-revolution in adolescence; Chapter 11, “A Liberation of Desire”, with the court case concerning the issue of Recherches on homosexuality; and Chapter 12, “Machinic Junkies,” with doping. The fourth section on “Psychoanalysis and Schizoanalysis” addresses Guattari’s relationship with psychoanalysis. While Chapter 13, “Lacan was an Event in my Life,” focusses on the relationship to Lacan, Chapter 14, “Psychoanalysis should get a grip on Life,” is a formulation of Guattari’s critique of psychoanalysis after the writing of Anti-Oedipus with Gilles Deleuze. Chapter 15, an interview titled “The Unconscious is turned toward the Future,” deals with themes developed in Guattari’s The Machinic Unconscious, most notably the work of Marcel Proust and the place of the unconscious in À la recherche du temps perdu. Strangely, Chapter 16, “The Refrain of Being and Meaning,” finds Guattari examining a dream of his own through the use of several diagrams.

The fifth and final section of the work is called “Integrated World Capitalism,” and begins with Chapter 19, “Plan for the Planet,” which asks a series of questions about class and the division of labour after the following criteria have been actualised: “an increase in world population…the gradual cutting-off of the flows of energy and raw materials…[and] the speeding-up of the concentration of machines and information systems.” (231) The section continues, further enriching and developing the effects of globalising capitalism on labour and the market. Following essays on Foucault and Lyotard, the volume concludes with Chapter 25, “Utopia Today.” This page-long response to a survey by La Quinzaine littéraire elucidates in a snippet view the Guattari who affirms the reality and necessity of revolution, stating that “Utopia, today, is to believe that current societies will be able to continue along on their merry little way without major upheavals. Social modes of organization that prevail today on earth are not holding up, literally and figuratively.” (307) This prophetic voice makes obvious Guattari’s relevance in our present day of Occupy Wall Street, student riots, and the Arab Spring.

More specifically, the new version of Soft Subversions finds its place as an entry point into Guattari’s oeuvre, as it continues to be translated into English. One can only hope that works such as Psychanalyse et transversalité follow in English translation as Guattari’s contribution to the fields of philosophy and psychoanalysis begins to be truly appreciated.