Bernard Stiegler, For a New Critique of Political Economy 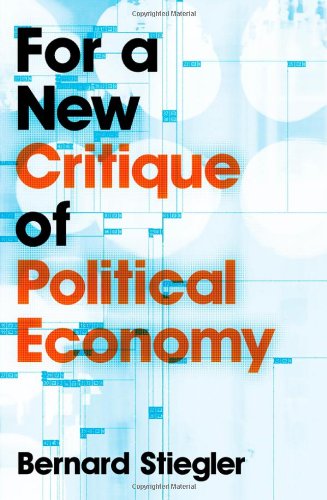 Bernard Stiegler has developed, over the last decade, an analysis of the ways in which technology transforms human consciousness. Drawing on the work of Heidegger and Derrida, Stiegler has argued that technologies of memory work to produce a loss of lived memory. The mnemotechnic devices of “tertiary retention”—from writing to more recent audiovisual and digital technologies—mediate conscious time as we live it. These technologies of memory are themselves subjected to techniques of grammatisation that allow for their distinction and reproduction as discrete units of information or grammes. Through this process the discrete grains of information produced by grammatisation function as a pharmakon (poison and remedy) that can either produce isolated individuals within a society dominated by the culture industry or offer the capacity for a new kind of transindividual economies of desire.

While his work has largely been oriented by, and read within, the post-phenomenological currents of French theory, For a New Critique of Political Economy (published in French in 2010 and translated into English with another recent essay, “Pharmacology of Capital and Economy of Contribution”) is Stiegler’s intervention in debates over the financial crisis of 2008 and contemporary political economy. He attempts a new critique—a “pharmacology”—that encompasses problems ranging from production, consumption and industrialisation to analyses of contemporary processes of proletarianisation. He argues that this new critique is necessary because Marx could not foresee the intensification of technological transformation, especially over the last several decades. Nevertheless, it is unclear how these technological changes invalidate the bases of Marx’s analyses. Despite his claim of commemorating the 150th anniversary of the publication of Marx’s Contributions to a Critique of Political Economy (1859), Stiegler does little more than replace Marx’s class analysis and revolutionary critique of capitalism with an analysis of how technology leads to short-term thinking.

Stiegler situates his intervention as a corrective to the tendency of recent French philosophy to sidestep or dismiss problems of political economy. As he correctly notes, the post-1968 generation of French philosophy, from Derrida and Foucault to Badiou and Rancière, rejects the economism (the reduction of superstructural features of social relations to their economic forms) of Althusser as well as the French Communist Party, its intellectuals, and its fellow-travelers. Nevertheless, Stiegler’s critique of his predecessors and contemporaries remains inconsistent. At the outset, he argues that French philosophy has “nothing whatsoever to say about the contemporary economy, as if nothing new had appeared in this domain since the end of the Second World War” (a claim that is obviously challenged by the publication of Foucault’s The Birth of Biopolitics, the 1978–1979 lectures at the Collège de France). (17)  These philosophers “speak of immigration, of Europe, or of democracy, but they do not speak of capital, nor labor, nor industry, nor marketing.” (19)  One would expect from these claims that Stiegler’s “new” critique will extend beyond the limits of the previous accounts of libidinal economy or economies of difference as they were carried out by Bataille, Derrida, Lacan or Lyotard. Yet after chastising others for ignoring the key problems of political economy, he argues that “a new critique of political economy is necessary, and it must also constitute a pharmacological critique of libidinal economy” (40–41) because contemporary capitalism captures our desires and reroutes them through short-term protentions (what phenomenologists have called pro-jections or anticipations).

So after claiming that his predecessors have ignored the problems of political economy, Stiegler lays claim to their work on libidinal economy as political economy (he also neglects the debates and contributions of the Frankfurt School, the Situationists, and the Autonomia group, among others). Given this inconsistency, it seems that Stiegler’s only clear objection is that they speak as if nothing new had happened in political economy since 1945. This would explain his tendency to utilise and incessantly repeat buzzwords that suggest analogies between economics and his pharmacology of desire—like “toxicity,” “commerce,” “credit,” “investment” or “bearish tendencies”—though they obscure his analysis rather than clarify it.

Whatever his take on French philosophy, the value of his critique of political economy rises or falls on its treatment of Marx and Marxist categories. First, he argues that grammatisation is a “condition” of proletarianisation. On Stiegler’s account, Plato is the first philosopher of proletarianisation, insofar as he shows (in the Phaedrus) that the “exteriorization of memory is a loss of memory and knowledge.” (29)  Grammatisation results from techniques of breaking down memory and knowledge into discrete “grains” that are isolated from the continuum of cognitive retention and protention. These techniques make possible the capture of desires and processes of individuation and transindividuation (collective subjectification) by the culture industry, which, Stiegler argues, turns these desires and processes toward short-term investment (libininal and economic) rather than long-term investment. Grammatisation, he argues, proletarianises human activity because it “produces short-circuits in the transindividuation process,” by orienting our desires and activities around ever shorter and more discrete horizons. (35)

As we know from Marx’s Economic and Philosophic Manuscripts of 1844, proletarianisation cannot be equated simply with exteriorisation. Invoking The German Ideology, Stiegler argues that exteriorisation (as grammatisation) “is the root of the technical question, that is, the question of this production of self by self in which the human consists” (30), but he does not address Marx’s crucial distinction between objectification (Vergegenständlichung) and alienation or externalisation (Entfremdung or Entäußerung). For Marx, objectification is the result of human practices, which mediate human needs, social relations, and the social metabolism of natural environments, while alienation is the result of specific historical social relations determined within capitalism. Without this distinction, it is possible to jump from the techniques of externalisation of writing to digital techniques of memory storage as if these transformations were determined by an unbroken historical continuum. One can make epochal claims, for instance, about cellular phones—“The spread of industrial hypomnesic apparatuses causes our memories to pass into machines, in such a way that, for example, we no longer know the telephone numbers of those close to us”—as if before them nobody had ever used address books. (30; compare this to Agamben’s comments in What is an Apparatus?, Stanford University Press, 2009, 16)

More importantly, Marx’s distinction between objectification and alienation allows us to grasp what is specific about social relations within capitalism, as well as the role of class struggle within these relations. Class struggle is entirely absent in Stiegler’s discussion of proletarianisation and his theory of crises. Drawing on Marx’s analyses about the stultification and tediousness of industrial work, Stiegler argues, on the basis of the proliferation of techniques of grammatisation, that today all aspects of social life are captured by processes of proletarianisation. (39) Certainly we can accept the claim that technological innovation transforms social relations and functions to immiserate workers rather than liberate them, but Stiegler explicitly empties his concept of “proletarianisation” of any class content; it becomes a problem of techniques of memory and knowledge, for producers, consumers, and all other sociological groups (he defines the proletariat as “those economic actors who are without knowledge because they are without memory: their memory has passed into the machine that reproduces gestures that the proletariat no longer needs to know”).  (35) Stiegler never answers the question of how the critique of techniques of memory and knowledge tell us anything about proletarianisation as a process of expropriation of surplus-value and accumulation by dispossession. He does, however, wax nostalgic about the charms of the petty bourgeoisie, who—unlike the working class—could “emancipate itself from the pure necessity of reproducing its labor power, and can therefore liberate itself from pure negotium, that is, from completely calculable exchange.” (64–65) With such pleasures, who needs to speak of liberating the working class?

If Stiegler can manage to empty “proletarianisation” of its class content, we should not be surprised that his account of the recent crisis prioritises technological and moral solutions rather than political ones: “technics becomes the central stakes” of political economy, which in turn becomes a question of “sociotherapy.” (36) On his account, the financialisation of capital is the most recent of techniques, like “the pharmakon of writing,” that can “short-circuit living and anamnesic memory.” (79) Stiegler attempts to show, in one of those moments when his analogies obstruct a clear analysis, how the “struggle against the tendential fall in the rate of profit thus induces a tendential fall in libidinal energy, which reinforces the speculative tendency of capital, that is, its disinvestment.” (89) He argues that consumerism, the first sustained solution to the tendential fall in the rate of profit, produces the fall in libidinal energy, short-circuiting the long-term investments of desire. A widespread “dictatorship of short-termism” is the result. (57) The cause of the crisis, then, is “carelessness” (incurie), brought on by short-term thinking, when one “scoffs at the economic as well as social consequences of ‘profitable’ decisions.” (80) Given that he reduces structural crises to motivations such as carelessness (85), it should come as no surprise that Stiegler is a reformist in the last instance, calling for a “sociotherapy” to cultivate long-term horizons in transindividual relations and for laws and regulations to prevent the more harmful aspects of capital accumulation. (99–101 and 108)

Stiegler is emblematic of a conservative French republicanism masquerading as radical theory: political questions, on his account, are subordinated to technological questions, and reformism replaces popular struggle. In sum, for Stiegler, the system carries risks, but these can be corrected if we just care enough, that is, if we create the proper institutions to handle our investments, libidinal and otherwise. When Stiegler argues that “new apparatuses of production of libidinal energy must be conceived and instituted” his examples are, embarrassingly enough, “the ecclesiastical institution and its care-ful [curieux] inhabitant, the curé [and] the school and its master, the teacher.” (108) If this is a new critique of political economy, then long live the ‘old’ critique! Combating capitalism today requires analysing how neoliberalism is a project of re-entrenching capitalist class power, as well as conceptualising how the techniques of this project (expropriation, privatisation, financialisation, accumulation by dispossession, and the uneven deployment of production across the global north and south) serve to reinforce that goal. For this task, there are more tools in Marx’s contributions than in Stiegler’s.

When a man has filled his mouth so full of food that for this reason he cannot eat and it must end with his dying of hunger, does giving food to him consist in stuffing his mouth even more or, instead, in taking a little away so that he can eat?