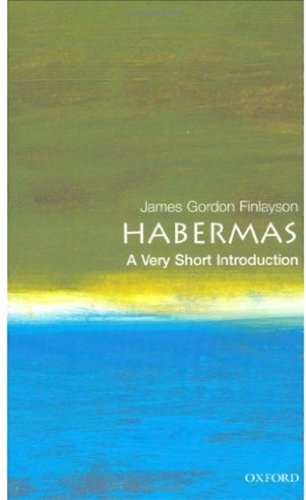 The sense among academics that Habermas’ writings have now become part of the canon, not only in philosophy and in political science but in the social sciences and in law as well, has lead to the recent publication of a spate of introductions to his work. The publication of so many such works provides not only an opportunity to evaluate their comparative strengths and weaknesses, but also to comment on the various possible interpretations of Habermas’ philosophical project and its reception in different countries.

The first work considered here is Finlayson’s Habermas: A Very Short Introduction. By virtue of the author’s straightforward approach, the language of publication, and the fact that it was one of the first such guides available, it has sold in the order of 17,000 copies. Beginning with a very short biography of Habermas, Finlayson attempts, in a little over 150 pages, to trace the evolution of Habermas’ thought and to explain the key points to an audience previously unfamiliar to his work. There is much to recommend in this work: the writing style, and the author’s excellent grasp of Habermas’ work on universal pragmatics, discourse ethics, the philosophy of law, his theory of democracy (all of which enjoy extended, detailed treatment). Finlayson also includes a strong summary of Habermas’ Habilitationsschrift, The Structural Transformation of the Bourgeois Public Sphere, which builds on an informed discussion of Adorno and Horkheimer’s The Dialectic of Enlightenment (and their analysis of the culture industry). After developing Habermas’ philosophical concerns, Finlayson concludes the book with a discussion of Habermas’ oft-ignored interventions on Europe and constitutional patriotism.  There is little that is incorrect in the book—Habermas’ thought is faithfully rendered. This is no small feat when trying to summarise the work of a major thinker.

However, this does not mean that there is nothing to disagree with in Finlayson’s book.  For example, in his preface, Finlayson describes what he sees as Habermas’ research program: a steady progression from a pragmatic theory of meaning to a theory of communicative rationality to the internally related political, social and discourse-ethic theories for which he has become well-known in the West. This is a curious method of classification on the part of Finlayson, since its plausibility rests on the fact that he dismisses a number of Habermas’ early works, including the critique of Marcuse’s Marxism; the debate with Gadamer over the universality of hermeneutics; the dialogue with psychoanalysis (including the engagement with Mitscherlich and Lorenzer over the possibility that psychoanalysis could provide the framework for a theory of ideological critique); the Positivist Debate with Popper and the critique of the dominant paradigms in the philosophy of the social sciences; his involvement with the student movement; and Legitimation Crisis—a work which was important not only for Habermas’ attempt to develop a theory of social pathology later in The Theory of Communicative Action, but also influential on other German political theorists such as Claus Offe. Moreover, by ignoring these works, Finlayson is forced to treat Habermas’ Habilitationsschrift as something of an outlier and to present Habermas’ middle period as a period of philosophical journeying (16) and of better acquainting himself with contemporary debates in Anglo-American philosophy of language (17–18), rather than as a period of intense philosophical productivity (which is closer to the truth). Put simply, the twenty years between the two works are substantially under-theorised in Finlayson’s guide: the reception of American pragmatism is quite simply not the only thing that went on. (16)  Similarly, the discussion of Habermas’ influences when writing his magnum opus is strange: Lawrence Kohlberg’s work on moral development merits a very long discussion, but Jean Piaget’s equally important work (for Habermas) is ignored. Parsons’ systems theory comes in for no great discussion at all and the debate with Luhmann over the nature of systems theory is ignored. (Luhmann deserves, in fact, not a single mention in the index!)

While Finlayson is discussing Habermas from the perspective of an Anglo-Saxon philosopher, the other two books that I will discuss here are written by German academics, albeit from different generations. The first, titled simply Habermas, is written by Hauke Brunkhorst, professor of sociology at the University of Flensburg who previously studied under Habermas in Frankfurt.

The subsequent sections of Brunkhorst’s book show how Habermas’ discussion of communicative rationality changes the paradigm adopted by the first generation of critical theorists. Brunkhorst traces the evolution of Hegel’s critique of Kant from Marx to Adorno and Horkheimer and then shows how Habermas, in Zur Rekonstruktion des historischen Materialismus, recasts rationality as a learning process adopted by late capitalist society as a way of self-regulating. Here again Brunkhorst is at his strongest, for he is able to compare Habermas’ evolution to the work of Mead, Piaget and Kohlberg. He then closes the chapter with an original summary of the debate between Foucault, Butler and Habermas over the role of reason in the creation of social domination.

In the final section of the book, Brunkhorst returns to the role of the theory of communicative action, this time recasting it in terms of the much-discussed paradigm shift between the philosophy of consciousness and the philosophy of communication. Here, his goal is to show that the shift in Habermas’ work has important consequences for postwar sociology, not only in Germany but worldwide (92), and for the theory of the capitalist state. Here again, Brunkhorst adopts a different approach from Finlayson, assuming that the reader already has some knowledge of Habermas’ work, preferring to focus on the debates between Habermas, Luhmann, Schelsky, Parsons and others. Ultimately, Brunkhorst is strongest where Finlayson is weakest: the strength of the work lies in its explication of the sociological debates that informed Habermas’ evolution. Conversely, Finlayson lays bare, in a way Brunkhorst does not, Habermas’ philosophical development and the content of Habermas’ work in the philosophy of language.

The final work to be examined is Mattias Iser and David Strecker’s Jürgen Habermas: zur Einführung. Iser and Strecker are part of a younger generation of German scholars who, while intimately familiar with Habermas’ work, have had less direct contact with Habermas himself and who have also been exposed to Habermas’ thought through the reception of his work both in Germany and abroad.

Iser and Strecker adopt a different approach than Finlayson and Brunkhorst. Rather than stressing the regulative function of communication, the authors stress Habermas’ critique of modernity. Of course, modernity is not completely distinct from communication in Habermas’ work; after all, communication is the key to Habermas’ model of legitimation in society divorced from traditional worldviews. Nonetheless, the approach does offer its advantages. The authors begin with a summary of Habermas’ biography that is richer and more detailed than that offered by Finlayson or Brunkhorst. Their goal here is not merely to present biographical details, but to show Habermas’ involvement with major events in German political history since World War II. Thus, they offer a better discussion of Habermas’ involvement with the German SDS and they also address the debate with conservative historians in the 1980s (wholly absent from the other works) and the debate with Cardinal Ratzinger, now Pope Benedict, over the role of religion in Europe (which is so recent as to be absent from both Finlayson’s and Brunkhorst’s books).

In the second section, Iser and Strecker deviate from the standard understanding of Habermas’ thought along the line of a pre- and post-communicative turn, preferring to identify three critiques of modernity offered by Habermas’ version of critical theory: the critique of ideology, the approach grounded in the cognitive theory of knowledge and the communicative model. (57)  This approach, it seems to me, offers a much more useful way of categorising Habermas’ oeuvre than the standard narrative, which differentiates the philosophy of consciousness from the philosophy of communicative action. In the first instance, it allows the authors to better classify all of Habermas’ works without straining the theoretical framework. After all, it is difficult see the relationship between the critique of Marcuse and the work on the public sphere, on the one hand, and the book Knowledge and Human Interests, on the other—yet the approach adopted by Finlayson and Brunkhorst would seem to require it.

It is disappointing, therefore, that the authors do not put this framework to better use since it would aid in the explication of Habermas’ entire corpus. Instead, they jump more or less straight to The Theory of Communicative Action, which they approach in a way similar to Finlayson. After developing the groundwork for the theory, they show how Habermas uses it to construct both a theory of the pathological development of late-capitalist society (the so-called thesis of the colonisation of the lifeworld) and a theory of the democratic state. The authors conclude the book by examining the relationship between Habermas’ theory of democracy and theories of the nation-state, as well as his involvement in public debates over the future of Europe, the role of religion and the possibility for transnational governance.

Ultimately, each of the books under consideration has its strengths and weaknesses, and to recommend one to the reader would wholly depend on what the reader hoped to take from it. Finlayson’s is undoubtedly the strongest account of Habermas’ philosophical development; Brunkhorst better situates Habermas’ though in the context of sociological debates in the late 20th century; Iser and Strecker provide an excellent summary of the relationship between the critique of late-capitalist society and Habermas’ political theory.

However, a review should not be content to merely rank books in the field. It should also try to account for the methodological approach of the author. Here, a remarkable division shows itself. Beyond the disciplinary divides between sociology (Brunkhorst), political theory (Iser and Strecker) and philosophy (Finlayson), Finlayson’s treatment of Habermas’ work mirrors Habermas’ reception in the Anglo-Saxon world (and to a great extent which translations of Habermas are widely available). Finlayson, unlike Brunkhorst or Iser and Strecker, ignores Habermas’ early work in the philosophy of the social sciences and his engagements with German politics. This is unfortunate, because for all the strengths of Finlayson’s work on Habermas’ philosophy, this focus has the effect of divorcing Habermas’ work from the tradition of critical theory of which it is so much a part. And yet, it is paradoxically for that reason that Finlayson’s book may be the most useful for the English-speaking student of Habermas, in so far as Finlayson does a good job of summarising those areas of Habermas’ thought most discussed in the English-speaking world.