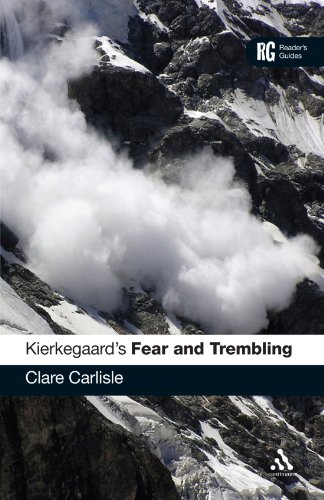 Clare Carlisle’s Kierkegaard’s Fear and Trembling: A Reader’s Guide is part of the recent series of guides by Continuum.  According to the front matter, the series aims to provide “clear, concise, and accessible introductions” to major works of philosophy.  This particular book does not verge far from this description: the bulk of the guide, around three-quarters, is dedicated to its expository second chapter, which leads the reader through Kierkegaard’s text step by step. The two chapters that bookend this exegesis are dedicated to a thematic and historical overview and a brief survey of some of the commentaries on the primary text respectively. Despite Carlisle’s baffling claim in the foreword that “[r]eaders who would like a shorter overall discussion…might miss out the lengthy section ‘Reading the Text’” (x), it is this excellent second chapter that comprises the great majority of both the content and potential interest in the guide.

Before taking up this exposition, let us begin with the opening chapter, “Overview of Themes and Context.”  Carlisle briefly touches upon the main themes that will be her focus in later chapters: the Eckhartian brand of receptive faith (8); the relation between ethical universality and the particular (5); the so-called “spheres of existence” (15); the critique of enlightenment humanism and human self-sufficiency (21); the courageous expectation of Abraham. (3)  She also delves into biographical matters but manages to avoid voyeuristic excess. In fact, her interest in Kierkegaard’s personal life remains quite poignant: touching upon his broken engagement to Regine Olsen ultimately allows Carlisle to better transfer the themes of Fear and Trembling (FT) from a narrowly religious, into a wider secularised and interpersonal, context. There is evidence throughout that Carlisle is pushing for such a recontextualisation; indeed, the final words of the guide ask whether we can regard the receptive expectation of faith as a purely human possibility.

From this latter point, however, one should not assume that Carlisle provides us with a secularised reading of FT. The exegetical chapter, sectioned neatly by FT’s own divisions as well as Carlisle’s own thematic subheadings, certainly takes the religiosity of the text into account; that is, it draws on not only pseudonymous but also “theological” writings by Kierkegaard (199), fills in the historico-religious context of post-reformation Europe (3), analyses Luther’s highly fideistic reading of the march to Mount Moriah (131), and so on. Though the reading provided here does not diverge in any radical way from what one may call a “standard” interpretation of the text (the themes mentioned in the “Overview” attest to this fact), the guide’s strength is its breadth. Weaving all the aforementioned themes in a succinct and flowing manner is no small task, yet Carlisle succeeds—even when she seems to presume that the reader has little or no background in the issues at hand.  Carlisle’s overview of Luther and the reformation, for instance, or her explanation of Cartesian doubt, presuppose very little familiarity with the issues at stake; nevertheless, she generally avoids the danger of paying mere compulsory lip-service to a topic for the sake of ease or brevity. Furthermore, her prose remains, aside from a handful of exceedingly lengthy parenthetical asides, remarkably lucid.

If anything appears lacking in this second chapter it is further space devoted to the idealist background, especially Hegel. While Carlisle picks up the debate about whether the “ethical” in FT is to be viewed in more Kantian or Hegelian terms (Carlisle herself favours a Hegelian, Sittlichkeit-oriented reading (175–76)), one cannot help but feel as though the handful of pages devoted to Aufhebung, universality, particularity, Sittlichkeit and teleology appear rushed. Given the complexity of such concepts and, further, the thoroughly polemical tone of FT (whether it be against the Danish Hegelians or Hegel himself), more time devoted to such issues surely would have proven useful, as would a exploration of Hegel’s own engagement with the story of the akeda in his earlier theological writings. Nevertheless, in a guide designed to clearly and concisely aid the reader through the primary text, some such economising is inevitable, and overall Carlisle’s exposition is solid.

Yet, despite this chapter’s obvious merits, there remains here always a lingering uneasiness. If we consider that FT addresses themes (particularity, decision, passion, etc.) that render the desire to be authoritatively ‘guided’ problematic, then we must wonder why this book was written. Furthermore, there already exist a number of guides for FT.  Carlisle herself raises this question in the foreword. She goes so far as to list other similar texts (Lippitt’s Routledge Guidebook to Kierkegaard and Fear and Trembling (2003) and Mooney’s Knights of Faith and Resignation (1991)), but beyond these specific works there are a plethora of more general guides to the works of Kierkegaard—including Carlisle’s own recent Guide for the Perplexed (2007). Such texts will surely overlap in some respects with this Continuum guide.

Why, then, write this text? Carlisle answers such worries by stating that it gave her the excuse to reread this infinitely engaging work, but also provided the opportunity to read it with a specific theme in mind, namely courage. She means to imply not the finite courage of the knight of resignation to dispossess actuality, but rather the “paradoxical” (66) Eckhartian courage of Abraham that regains for him the world; in short, the courage of receptivity in the face of finitude. However, to claim that “courage” provides the raison d’être of the entire book would be somewhat disingenuous: Carlisle mentions courage in the Foreword, but for the next one-hundred and fifty pages tend to focus on the more well-worn Kierkegaardian territories that are freedom, particularity, decision, and so on.

More space devoted to this theme is found in the third chapter, “Reception and Influence.” Here, Carlisle surveys a “small selection” of the secondary literature (175) and expands upon her own exploration of courage.  She discusses Levinas, Derrida, Mulhall, Sharon Krishek (author of the recent Kierkegaard on Faith and Love (2009)), as well as rather idiosyncratic deployments of Kierkegaard to be found in more recent texts, such as Jonathan Lear’s Radical Hope: Ethics in the Face of Cultural Devastation (which maps receptive courage in the face of finitude onto the cultural destruction of aboriginal groups in the United States (195)). While this chapter is useful for those seeking to enter into more detailed scholarly debates, even Carlisle herself admits that it is more of a starting point intended to “convey a sense of the variety of interpretive directions that have been taken by scholars” (175); it is surely not, then, strong enough to stand on its own if the reader were to take Carlisle’s advice about bypassing her exposition.

Still, if we shift the question from “why a guide?” to “why this guide and not another?,” then Carlisle’s text has much to offer. For its lucid and thorough exegetical component as well as its engagement with recent scholarship, Clare Carlisle’s Kierkegaard’s Fear & Trembling should be the guide of choice for readers seeking assistance with this ever re-readable text.