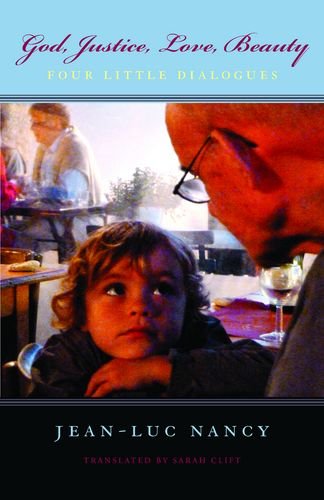 French philosopher Jean-Luc Nancy’s recent work is little more than the translation of a series of talks he gave to school children in 2002.  It is a little book that contains four little chapters.  According to the sales pitch below the obligatory endorsements on the back cover, the author is said to move “seamlessly…from Schwarzenegger to Plato…to Caillou, Harry Potter, and the pages of Gala magazine.  Nancy’s wide-ranging references bear witness to his commitment to think of ‘culture’ in its broadest sense.” By all appearances, this is Nancy’s concession to popular philosophy.  Expecting this, the reader will likely be sorely disappointed.

For one, the dialogues are hardly little.  Nancy himself remarks that “the idea of little dialogues seems poorly chosen; they are, rather, dialogues for little ones [pour les petits].  But what does little ones mean?” (65)  Further on, while taking questions from the children, he proceeds to remind the facilitator, Gilberte Tsaï, that “a child’s question could also be posed by an adult who doesn’t know he or she is posing a child’s question.” (120)  In fact, there is nothing childish or little about Nancy’s dialogues—nor do they make concessions to popular culture.  Instead, the text is modern philosophy reduced to its pure essentiality.  What Nancy reveals in these four interweaving chats is a sense of the mystery and profound depth that modern philosophy is capable of offering the human mind—irrespective of age.

To accomplish this, Nancy avoids excessive references to either contemporary scholars or the canon, although the text bears witness to his immersion in the works of Descartes, Pascal, Kant, Hegel, Heidegger, Levinas and, most recently, Derrida.  By leaving this vast and intimidating store of philosophical treasures outside the room, Nancy is able to focus on what truly matters: thinking itself.  He is successful in this highly risky enterprise by dealing practically and concretely with matters of universal concern: god, justice, love, beauty.  It is because these objects are always on our mind that Nancy is able to connect them easily with the world of popular culture.  Yet, Nancy never idles there, moving instead to whisk the audience to a (non)place that stands behind or beyond these common, yet truly human, experiences.

All told, the text is difficult.  While, on the one hand, it is remarkably free of the dense, intimidating prose that characterises the genre, the simple free-flowing sentences hit upon grand ideas that make the mind shudder with the labour of turning against its own petrified conventions.  Instead of incomprehension as a result of the inaccessible nature of the writing, the mind must deal here with a-comprehension: the inability to grasp that which is “no place,” “nowhere” and “nothing.” (8–9)  Indeed, what Nancy proposes escapes the logic of presence and non-presence, those “two symmetrical and connected postulations… based in the same metaphysical presuppositions with regard to being” (2), that have eclipsed the place of thought in Western metaphysics.

Despite the text’s commitment to thought without presuppositions, the student of philosophy will no doubt notice a trail of bread crumbs leading back both to Nancy’s former texts, as well as the works of the canon, including those of philosopher-theologian Blaise Pascal. Pascal’s evocation of the mystery of the Redeemer anticipates Immanuel Kant’s distinctions between noumenal and phenomenal, moral and natural, creation and production, thought and cognition, which serve as a guiding thread for the discussion in the four dialogues.  Nancy clearly attributes this essential philosophical distinction to the nature of thinking itself and thus links the latter to Christian revelation, and Abrahamic monotheism considered more broadly.  It is no surprise then that each dialogue feels at home in a philosophy of religion, a sentiment most readily apparent in the first chapter on God but which is replicated in the following chapters. Nancy reminds us, after all, that the concepts of God in the three monotheistic traditions are Justice (Judaism), Love (Christianity), and Mercy (Islam). (14)

In seeking to challenge his audience (and us) to rethink our concept of the divine, Nancy casually dismisses both atheism and theism as a sort of tempest in a teapot, articulating instead a vision of God owing more to Kabbalah than positivism.  Responding to a question, he explains that God is neither a known being nor an unknown one but the “void that is opening up.” (29)  While Nancy’s flirtation with the irrational may irritate those of a more analytic mindset, the implications of his train of thought stretch far beyond belief or disbelief in god.  In “Justice,” Nancy immediately differentiates between the perspective of nature, i.e. the “right of the stronger,” and that which emerges from the monotheistic tradition: absolute or infinite worth of every singular individual.   Here, as elsewhere, the text evokes Kant’s notion of dignity and Hegel’s mutual recognition. As Nancy proceeds, he demonstrates the contradiction of grounding a moral “law” on natural strength and demarcates the quantitative idea of justice long associated with paganism (the calculative “to render each its due”) from the infinitely qualitative (and Biblical) imperative that “being just, is giving to each person that which you don’t even know he or she is owed.” (49)

The idea that the other (or the neighbour) possesses an infinite right, or that I owe the other an infinite debt because he or she cannot be measured, approximated or replaced, grounds the movement from the hierarchical structure of natural in/equality to a horizontal stratum of truly singular individuals who exist nonetheless (and necessarily) in relationship with each other.  At this point, the transition to love offers no difficulty. The beloved is, like God or the neighbour, the embodiment of “absolute value,” which is also his or her “absolute mystery.” (96)

The text, in truth, peaks with this third chapter, which concludes the triangulation of the unio mystica begun by the former two.  Nancy remarkably equates the book’s guiding imperative, thought or “reason,” with “love” (93), replicating Kant’s marriage of reason and moral practice in the Groundwork.  This philosophical rendition of Leviticus 19:18’s “love thy neighbour as thy self” equally echoes Hegel’s ascription of “love” as the contradiction-resolving unity of the highest stage of human socio-political existence: ethical life. As “real relation” (76), the relation of love is opposed to preference (liking or lusting) and characterised by fidelity—a word that bears a relationship to both confidence and fiancé. (79)

Having linked faith and love through the figure of the fiancé, Nancy may again play upon the themes of promise, obligation and trust that characterise his understanding of monotheism and justice. In each case, including the closing chapter on beauty, the individual in his or her trembling singularity enters into a relationship of risk with the unknown beyond.  The only ‘thing’ mitigating this risk is the absolute worth of that which stands at a remove from the revealed as its source and power. Simultaneously, the confidence one has in this absolute value is equally what terrorizes, its sublimity inspiring both awe and disquiet.  “Beauty,” he writes, “is terrible; it is unsettling because it cannot be limited to suitability or harmony.” (121)  Like the former categories, beauty is an irruptive force that breaks the hard and fast logic of causation and natural necessity that serves as the common sense rule of our epoch.

Nancy’s Four Little Dialogues manages to encapsulate artfully and originally the essence of modern Continental philosophy from Descartes to Derrida.  This is never more apparent than in the final chapter where Nancy cites the poet Arthur Rimbaud, declaring that in order “to awaken a sense of beauty…destruction is necessary.” (122)  What seems here to be a remark belonging exclusively to the aesthetic domain is actually the slogan of the whole mode of thinking that Nancy expertly deploys throughout the text, from Descartes’ methodology of doubt and Pascal’s wager to Kant’s use of critique and Hegel’s Aufhebung, and of course Derrida’s and Nancy’s de(con)struction. More than that, however, it is the Abrahamic movement against the self that makes room for, and embraces, the other.  Nancy thus shows us that to think is, properly speaking, to enter into dialogue with God, Justice, Love and Beauty.

Nancy manages to condense all this into a brief one hundred and twenty-six pages, whose significance lies, paradoxically, in a desire not to go beyond the great thinkers the text silently calls upon.  In this way, the text’s modest aims and hospitable writing appeal to the fact that great ideas can be illuminated in a straightforward manner and indeed even (and especially) to those least initiated in the arcana of Continental philosophy. For the reminder that such philosophy can be accessible without being “popular,” and as an introduction to Jean-Luc Nancy’s appropriation of the canon, God, Justice, Love, Beauty commends itself to our attention. The text, as dialogue, leads us into the enigmatic heart of what it means to be truly modern/thoughtful in an age where that very f/act has lost all mystery and hence all meaning.