Michael Mack, Spinoza and the Specters of Modernity 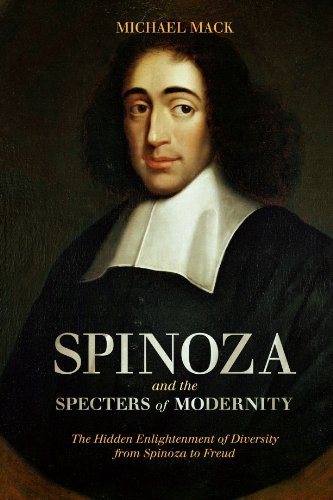 Michael Mack joins a number of thinkers—including Louis Althusser, Gilles Deleuze, Antonio Negri, and Jonathan Israel—in the effort to locate Spinoza within an alternative current of modernity.  Akin especially to Israel’s portrait, Mack presents Spinoza as an enlightenment thinker who deepens and radicalises the major concepts associated with the modern age: equality, fraternity, and liberty.  Distinguishing Mack’s study from either Israel’s sweeping history of ideas or the Marxist effort to produce an anomalous thread in the history of philosophy is his alliance of Spinoza with Herder’s philosophical anthropology, the literary productions of Goethe and Eliot, and the thought of Rosenzweig and Freud.  Mack links these figures within a “spectral” constellation, not only because they together sketch an alternative to the dominant Kantian tradition, but also because they recognise and affirm the “undecidability” of the human condition.  A spectre is between worlds, a disquieting figure of present absence, and thus blurs definitions, boundaries, and categories.  Indebted significantly to feminist analyses of Spinoza (Gatens and Lloyd), Mack thematises Spinoza’s influence on these thinkers primarily as a confounder of binary oppositions between mind/body, reason/passion, nature/culture, private/public, and self/other.  The undecidability of frontiers and concepts that characterises this alter-tradition, according to Mack, yields a profound suspicion of hierarchies of any kind and a keen interest in narrative as “the constitutive fabric of politics, identity, society, religion, and the larger sphere of culture.” (2)

The centrepiece of Mack’s analysis is a triptych on Herder’s Spinozism (Chapters 3–5).  Mack seeks to challenge the view of Herder’s intellectual heritage as following primarily from Locke, Leibniz, and Rousseau.  Mack demonstrates that Herder’s critique of Kant—for which he is best-known—owes a profound debt to Spinoza.  Spinoza thereby appears as a fecund source of challenges to the mainstream enlightenment tradition, and Herder gains an important place, alongside the French materialists championed by Israel, as a radical enlightenment thinker committed to a more comprehensive egalitarianism and universalism.  Mack’s outline of this influence is, in my view, an important addition to the now popular portrait of Spinoza as the progenitor of a radical democratic and materialist tradition, especially so given Herder’s embrace of religious diversity as proper to a rational society.  As illuminating as Israel’s magisterial work is, it risks wholly identifying Spinozism with a secularism that is hostile to religion.  Spinoza’s writings are not unambiguously atheist, or dismissive of religion as a backward form of superstition, as many readers understand them today.  Mack outlines a tendency of Spinozism that is rationalist and yet charitable toward the diversity of beliefs and narratives that comprise cultural life.  Mack keenly appreciates Spinoza, not just as a critic of the destructive features of religion, but as a philosopher who acknowledges the limits of reason, and the inability in each and every one of us, by virtue of our finitude, to transcend our prejudices. (106)  Hostility toward prejudice tout court amounts to cruelty directed at oneself, as well as others, since we cannot but picture the world via an imaginative Gestalt. Moreover, such hostility easily yields a hierarchy between the enlightened few and the ignorant masses.

Mack’s primary aim is to show how the Spinozism inherited by his spectral constellation serves to disrupt hierarchies that often follow from binary oppositions.  He finds that the pervasive suspicion of hierarchies in Spinoza’s metaphysics opens possibilities for a truly inclusive universalism.  From “Spinoza’s notion of the mind as a plural, sustainable and ever-changing unity,” Mack suggests a template for “an inclusive universalism that would be truly beneficial for the nonviolent solving of problems that global societies are facing at the dawn of the 21st century.” (47)  It would be worth considering, however, Spinoza’s own resistance to certain forms of inclusiveness.  Even if many thinkers (including Marxists, feminists, radical democrats, and deep ecologists) have found in Spinoza’s metaphysics a great deal of inspiration for a less exclusionary political or moral programme, Spinoza himself objected, for example, to including women in government (Political Treatise, Ch. 11, pars. 3–4), and to considering the interests of nonhuman animals when they come into conflict with our own (Ethics, part IV, proposition 37, scholium 1).  While championing Spinoza’s unprecedented radicalism, we might also seek to understand the reasons he offers for his exclusions, without excusing or ignoring them.  Moreover, as compelling and fruitful as Spinoza’s horizontal ontology is, it is far from sufficient to guard against the formation of oppressive power relations.  Indeed, even if Spinoza accords no metaphysical priority to thought over extension, and even if his conception of Nature is a diverse but unified totality that “connects rather than divides” (39), he is wary of how we are often “enemies” to one another (e.g., Political Treatise, Ch. 8, par. 12), and of our ineradicable vulnerability to more powerful forces (Ethics, part IV, axiom 1).  Although Mack’s aim is primarily to highlight how Spinozism guides later thinkers’ efforts to develop a notion of universalism that accommodates diversity and opposes hierarchy, it is at least worth acknowledging Spinoza’s inability to embrace these values for women, among others.

As a Spinoza scholar, I was most interested in Mack’s interpretation of Spinoza’s principle of conatus, the striving by which each being aims to preserve and enhance its life.  He suggests that the conatus gets taken up by later thinkers not only as a doctrine of self-preservation, or as the ultimate source of all human (and nonhuman) motivation, but also as a critique of how self-preservation can be narrowly construed so as to yield self-destruction (and, in his concluding discussion of Freud, a “loss of reality”).  Mack reads Spinoza’s conatus as a principle of self-sustainability that can only be actualised by virtue of a contribution to the well-being of the other forces with which one is intertwined (Chapter 2).  Self-preservation, properly understood, opens the self to those (infinitely many) others without which one cannot be.  He suggests that “One could in fact read Spinoza’s central notion of conatus…as being congruent with the basic ethical teachings of rabbinical Judaism.”  He compares “Spinoza’s idiosyncratic take on the conatus” to the provocations of Hillel the Elder “If I am not for myself, who will be for me? And when I am for myself, what am ‘I’?” (94)  Unfortunately, he does not develop his interpretation in greater detail, and the intriguing link he provides to rabbinical teachings is simply asserted.  I hope that he will develop his analysis of conatus and its affinity with rabbinical teachings in future work.

Finally, Spinoza and the Specters of Modernity highlights a number of fertile connections to Spinoza and adumbrates modern thought and culture in new ways.  It suggests several avenues for future research and goes some way toward correcting the false portrait of Spinoza as an uncompromising rationalist who has little appreciation of the imaginative fabric of cultural life.