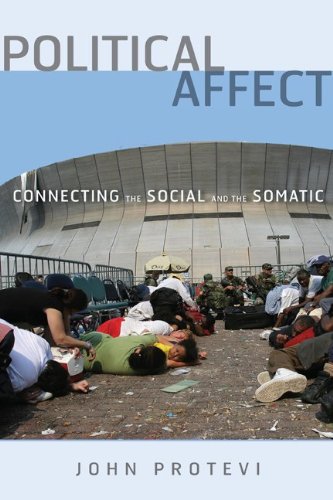 The autonomy of the political subject is a much-debated concept within philosophy.  On the one hand, many schools of thought presuppose a rational cognitive subject—that is, the individual who collects information, processes it, and locates him- or herself within it to make a premeditated decision. (3)  On the other hand, “leftist” schools of thought understand the subject to be limited by the social context within which he or she exists. (3)  The social forces constantly surrounding us shape our behaviour.  In his Political Affect, John Protevi enters this debate by offering an alternative to both the rational cognitive and socially constructed models of the subject.  His central argument is that subjectivity is at times circumvented entirely with a direct connection between the somatic and the social. (xi)  Merging cognitive science with social theory and philosophy in a unique and fascinating approach, he is successful at demonstrating the connection between the social and the somatic in what he labels “political physiology” (xi) at every stage of the text.

Political Affect begins with an exploration of key concepts from social theory and cognitive science that Protevi then relies upon throughout the rest of the book.  Such concepts include “complexity theory,” a postulate of nonlinear dynamics centred upon the formation of simple structures out of the complex web of a system’s features. (5)  Equally intriguing is the notion of “emergence,” or the longer-term coming into being of short-term systemic constraints upon the behaviour of the system’s components. (8)  We also learn about “development systems theory” (DST), which suggests that systems comprise both a genetic component, or “blueprint” preceding them, as well as an epigenetic component, or “background” within which that blueprint is shaped into an actual system. (19)  Protevi employs this theoretical backdrop to suggest that subjects are at the same time embodied in the somatic and embedded in the social. (28–29)

Protevi proceeds by identifying three concepts central to his own work.  The first term, “bodies politic,” locates humans within embodied and embedded processes on two different scales, the compositional and the temporal. (37)  In terms of composition, bodies politic range from the first-order, or personal body politic to the second-order, or group and civic bodies politic. (37)  Time-scales upon which these bodies politic manifest are short-term, mid-term, and long-term. However, Protevi stresses that these compositional and temporal scales be employed for analytic, not definitional practices, as existing bodies politic overlap between all of these scales. The second key term, “political cognition,” refers to how these bodies politic employ political categories to understand events. (33)  The third term, “political affect,” after which the book is titled, denotes the way in which the social acts directly upon the body politic in that body’s making sense of its social environment.  As Protevi summarises, “we make our worlds in making sense of situations, but we do so only on the basis of the world in which we find ourselves.” (35)  Political affect polarises an objective political physiology from subjective political feeling. (45)

After advancing these three terms the author explores the tradition of “the organism as the judgment of God” within Western philosophy. (61)  This tradition, two examples of which are identified by Protevi in Aristotle and Kant, takes the organism as a “hierarchically ordered body politic” situated within “a divine natural order.” (61)  Adopting a materialist Deleuzian ontology, Protevi follows in the footsteps of Deleuze and Guattari to depart from this tradition, advancing a model of the organism understood as the patterning of the biological by the social. (61, 89)  Hence, the organism is stratified as “a centralized, hierarchical, and strongly patterned body” (107) as opposed to the “theo-bio-political” model of traditional Western philosophy. (61)

With this understanding of the organism, Protevi proceeds with the most fascinating aspect of the work by examining three case studies through the lens of political affect.  In the first case, an examination of Terri Schiavo’s persistent vegetative state (PVS), he employs Deleuze and Guattari’s work to suggest that after entering PVS, Schiavo was destratified—that is, she moved from a subjective to a strictly organic functioning. (129–30)  Therefore, debate surrounding whether or not Schiavo had the right to die misses the point: a rights-based discourse relies upon there being a subject who can stake a claim to rights in the first place.  For Protevi, that subject was divorced from her organic surroundings upon entering PVS. (131)

In his second case study, an examination of the Columbine high school tragedy, Protevi argues that discussions centred upon social factors that may have influenced the shooters overlook political affect entirely. (143)  Employing the distinction between subjectivity and agency central to an understanding of political affect, Protevi suggests that shooters Klebold and Harris experienced a state of rage that bypassed their subjectivity in favour of the direct interaction of their somatic selves with their social environments. (149, 158)  Ultimately, “the practical agent of the act of killing” at the high school was “the Columbine killing machine consisting of Klebold-Harris-bombs-guns-school.” (158)  The subjectivities of Klebold and Harris were not involved in the actual carrying out of the event.

The third case study is an examination of race and fear in the immediate aftermath of Hurricane Katrina.  For Protevi, delayed government responses to the disaster reflected racialised fear. (177)  Fear is an instance of affective cognition, prompting the somatic to respond immediately without interaction on the part of the subjective. (175–77)  Employing the concept of emergence, Protevi suggests the components of this fear developed diachronically starting in colonial Louisiana, manifesting synchronically with the hurricane. (169, 181)  This fear conflicted with the solidarity displayed by citizens of New Orleans in their coming together to aid each other directly following the event. (163)  Ultimately, government should not stand in contrast to that solidarity but should be “the organized expression” of it. (183)

This book demonstrates a considerable number of strengths.  More specifically, it is refreshing to read a work that transcends disciplinary boundaries to merge cognitive science with social theory and philosophy.  By approaching the topic in this manner, Protevi provides an innovative take on the theme of the political subject within Western philosophy.  Although the introduction of cognitive science to the topic is accompanied by complex cognitive theory and equally complex language, Protevi makes these concepts accessible to the reader, utilizing the first chapter to take the reader through what are unchartered waters in political philosophy.  He is successful in this endeavor. Furthermore, with his use of case studies, the first two parts of his book come together in his locating concrete examples of political affect in recent political events.  The cases themselves are a real highlight of the work. Surrounded by controversy in the media, yet quite recent events, they serve as compelling points of analysis and a prime opportunity for the reader to witness Protevi’s theory of political affect in action.

Protevi’s work prompts questions for even further studies of political affect.  From an ethical perspective, there is something troubling in the suggestion that subjectivity is sometimes bypassed in favour of the direct interaction of the somatic with the social.  For, without subjectivity, how do we hold individuals accountable for their actions?  Protevi observes that conditions required for political affect emerge diachronically but that events stemming from these conditions manifest synchronically.  Yet in examples such as the Columbine high school tragedy and the racialised fear following Hurricane Katrina, how can we affect factors that emerge diachronically to prevent equally horrific events?  Admittedly, these questions are steeped in normativity and as Protevi’s work is meant to examine what is rather than what should be, he should not be held to account for their remaining unanswered.  Protevi’s work challenges disciplinary borders, provides a fresh approach to an understanding of subjectivity, and is brimming with compelling case studies.  For these reasons Protevi’s text is well worth reading and will challenge what we thought we knew about the political subject.