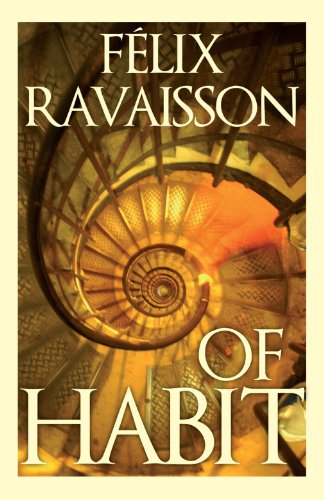 This volume is punctiliously designed by the most apt scholars.  An incisive preface by Catherine Malabou locates Félix Ravaisson’s work within his sphere of influence and suggests thematic ways into his text.  This introduction allows the reader to have a first glance at the threads holding Ravaisson’s ideas together in a way that makes the dense and often obscure essay easier to parse.  The volume pairs the English page-by-page with the original French, a practice that is refreshing for the reader and diligent of the editors, and that allows bilinguals (and hopefuls) to work with the volume’s bilingual nature so as to reveal the ways in which translations are inherently (if some more than others) limited.  Of the volume’s 139 pages, 54 are Ravaisson’s, making the English only a modest 27 pages.  Of six sections, 24 pages make up the first three sections. The editors’ commentary that follows is a section-by-section elucidation of Ravaisson’s terms, arguments, and aims that is both dextrous and methodical in its exegesis, even if at times as dense as Ravaisson’s work itself.

Ravaisson studied philosophy in Paris at the Collège Rollin where he wrote his dissertation on philosophical method under Hector Poret.  In 1834 he wrote a prized two-volume work on Aristotle’s metaphysics.  In 1837 he gained first place in the aggrégation and together with a secondary study on Speusippus in Latin, he submitted De l’habitude as his doctoral thesis. (3)  Ravaisson went on to a career in the civil service where he held many important positions in policy that directly influenced the style and manner in which philosophy in France in still undertaken today. (3)  Influencing such philosophers as Henri Bergson, Paul Ricœur, Maurice Merleau-Ponty and many others because of this volume, Ravaisson’s work on habit is now able to make a more significant impact in Anglo-philosophical circles.

Ravaisson’s first section is a metaphysical meditation on living and non-living beings, time, change, unity, and the emergence of habit.  In it Ravaisson ventures his first definition of habit as “a disposition relative to change, which is engendered in a being by the continuity or the repetition of this very same change.” (25)  In the case of living beings “if the change does not destroy it, it is always less and less altered by that change.” (31)  Or, if the change is brought about by the organism, then the change becomes its own and the organism’s receptivity to the natural world is decreased, demonstrating that the living being is able to be more spontaneous with respect to the natural world.  This is how living beings come to have habits.  Habits develop along with nature and in concert with the instincts of a living being.  He writes: “If, therefore, the characteristic of nature, which constitutes life, is the predominance of spontaneity over receptivity, then habit does not simply presuppose nature, but develops in the very direction of nature, and concurs with it.” (31)  Because living beings are both able to undergo and initiate change, there inheres in them a “double law of habit”: since the more an impression is used to navigate the world, the more frequently it is produced and since the frequency at which an impression is produced renders us less receptive to the world around us, movement becomes initiated more and more spontaneously from within the living being and less and less as a result of any impression. In her preface, Malabou refers to this as the “reversibility of energies.”  She continues: “Habit is at first an effect, a way of being that results from change, but it gradually becomes a cause of change itself, as it initiates and maintains repetition.” (ix)  Because the connection between action and reaction is then being weakened, there is a need to posit an organizing “center with the capacity to measure and dispense force.” (37)  This “center” is the capacity for judgement, the soul, and the “first light of freedom.” (37)

In the second section, the parallels between Maurice Merleau-Ponty’s “pre-objective realm” and Ravaisson are extraordinary: “The subject experiencing sensation barely distinguished himself from it.  It is wholly concentrated in him, as if within the obscure heart of his being.” (43)  But from this, subjects increasingly become perceivers, so we experience a gain in “movement, activity and freedom in the world of diversity and opposition.” (47)  Ravaisson then centres the perceiving individual in their experience of time, as consciousness is the constant experience of duration and change. (49)  We can either passively or actively undertake the repetition of sensations.  When we actively undertake repeated sensation the feeling reduces and we develop the ability to know and judge what we are sensing. If this is measured, then we become a connoisseur who can discern different gradations and qualities of sensations, but if the sensation is repeatedly sought and passively experienced, then our powers of discernment are rendered dull.

When the effort expended to navigate the world fades, and the movements we are capable of are better and more agile, our ability to perform the activity becomes a tendency in us that “no longer awaits the commandments of the will but rather anticipates them.” (51)  Likewise when we have become accustomed to a certain sensation, it becomes a need in us—the need is felt as an activity that “calls for [the sensation], invokes it; in a certain sense it implores [it].” (51)  This begins to look like a theory of desire, in that desiring can feel like longing, a lack, or a need in the body.  Ravaisson underscores just how prevalent repetition is in our bodily experience with the example of rocking a baby to sleep.  The rocking is what induces the sleep, transforming into a dulled, unnoticed sensation and thereby the baby’s sleep becomes dependent upon the rocking.  This is why Ravaisson can say that the rocking and other sensations like it “[destroy] sensation, but at the same time [create] a need for [them].” (53)  Desire, then, is awakened in the person for whom the sensation settles within consciousness. Ravaisson insists that this cannot be explained through a modification of the organs of sensation, nor through an intensification of the powers of our will or intelligence.  Dulled sensation frees up the will and consciousness for other endeavours, and the consequent activity undertaken becomes more agile, even if it may at first seem contradictory that when the precision of movement increases, the reliance on will decreases.

In the third section, Ravaisson explains how Will and Nature relate in the phenomenon of habit.  The transfer of actions from will to habit (and often from habit back to will) is in direct contrast with the idea that habits have no intellectual activity, or that habits are blind mechanism. (57)  This is because habitual action retains the form of the intelligence that instructs it.  In one of many Thomistic turns, he claims that our movements become fused with the willed activity that brought them about and this particular fusion creates a necessity or “law of the limbs,” which is also at the same time a “law of grace.” (57)  How is this different from instinct?  Ravaisson’s answer is that it is a matter of degree.  Instinct is more reliable and more bound by necessity, while habit is the dividing line, the “infinitesimal differential, or, the dynamic fluxion from Will to Nature.” (59)  He then goes on to explain how a Will can arise if nature dominates the instincts by way of necessity.

In the final sections, Ravaisson offers a brief summary of the work as a whole and then broadens his analysis into an onto-theology.  Continuity and repetition weakens sensation and feeling and thereby extinguishes pleasure and pain. (69)  Echoing Aristotle, the mechanism of habit, the very same thing that turns a continued activity into a need, is that which assures us of solid moral character after continued action. (69)  As good actions are repeated, and the feelings weaken and turn into tendency and need, the tendency to perform good actions takes over and we are increasingly able to enjoy the good actions that we perform.  Just as the end of movement can inhere in our being by becoming a habit, the idea of the good “descends into these depths, engendering love [in the powers of the soul] and raising that love up to [the good].” (71)  But, what could guarantee this notion of the good in us? And what could guarantee that it is the good provokes love in us?  In a spiritual turn, Ravaisson suggests that “It is God within us, God hidden solely by being so far within us in this intimate source of ourselves, to whose depths we do not descend.” (71)

Interesting for phenomenologists working on the habit body, deconstructionists working on auto-affection, Foucauldians interested in the uptake of processes of subjectivation and interpellation, Aristotelians hoping to unpack virtuous character for an embodied subject, and even critical and psychoanalytical theorists looking for connections between unconscious and conscious processes, Ravaisson’s ideas and their influence are just beginning to be understood, and this thoughtful volume is a welcome news for the curious philosopher of habit.  Ravaisson’s Of Habit is a brief but remarkable gem sure to find meaningful impact on the philosophy of habit.