Finn Fordham, I Do, I Undo, I Redo 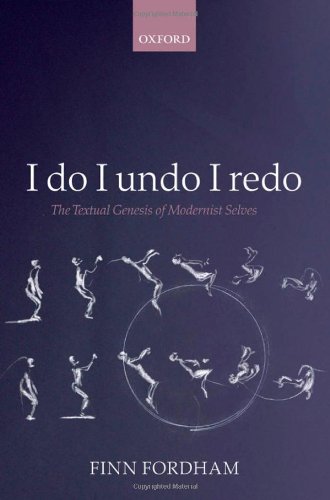 Drawing for methodological inspiration on genetic criticism, a form of post-structuralist literary theory that aims to study writers’ processes for purposes “other than establishing an authorized or edited ‘version’” (16), in I Do, I Undo, I Redo, Finn Fordham points to the importance of reading texts as sites of simultaneous self-expression and self-formation.  Eschewing any neat correspondence between author and text, in Fordham’s analysis partial drafts, manuscripts and finished texts become dazzlingly rich constellations of personal and social history, technological context and, most importantly, processes of selfhood. Fordham suggests that modernist conceptions of self and subjectivity, both in literature and in philosophy, are the products of the “intense experiences of producing texts.” (59)

This book is divided into two parts, the chapters in the first providing a methodological framework for the chapters in the second, in which Fordham exemplifies both the fertile ground of modern English literature (from the late 1880s to 1939) for thinking about subjectivity and the power of his proposed methodology.  His general hypothesis, that “formation shapes content” (26), applies equally to literary works as to their authors, and is reflected in his thoroughly teleological approach. While many modernist theories of subjectivity resist the study of drafts—their variability and lack of finality are often taken to “indicate an author in a split condition of undecidability and incompleteness” (25)—Fordham proposes to take up unfinished works as opportunities for insight into self-formation.  Bridging the gap between genetic criticism, which privileges almost exclusively the consideration of drafts (“avant-textes”), and book history, which looks almost exclusively at the history of the finished work, Fordham insists that “the book is often the teleological object of a process, just as it is also produced by the demands and expectations of a social network.” (27)  If overlooking drafts is unacceptable in the study of literary subjectivity, then so too is excluding the final work from analysis.

Fordham argues that by reading-together biographical details of an author and the works he or she finally produces, alongside the drafts marked by acts of writing, one can see not only that lived realities find their way into manuscripts but, more importantly, that the process(es) of writing itself becomes an important context—the “closest context of all” (27)—of the author’s creative life.  The practices of composition so shape the life of an author that “the line between text and context is blurred: the direction of flow between life and text becomes two-way.” (27)  For this reason, Fordham’s argument makes a significant and convincing ontological claim: that the biographical subject is not simply the cause of a text (understood both as an object, its form and its content), nor simply the effect of a text, but is marked by the experiences of writing, themselves shaped by the experiences of a life.  The created object is inscribed by such experiences.  As Fordham describes this, “processes are encoded in the product” (28), which I take to be the conjunction of author and finished work, subject and object.

The book’s title, inspired by Louise Bourgeois’ 2000 installation at the Tate Modern, suggests Fordham’s focus on the self and on subjectivity.  But it is impossible to miss a developing theory of objects, particularly of artifacts (books), which implies the importance of objects in technologies of self-formation and rests on an inseparability not only of objects from the selves that produce and shape them, but of selves from the objects they produce.

The case study chapters that comprise the second part of the book illustrate Fordham’s methodology. I am unable to do any justice to these chapters here, but will endeavour to give a small indication of what they have to offer.  Each chapter is devoted to a particular author and, usually, is focused on a particular work, revealing both an overarching “modernism,” an interest in the self and its revision, as well as resistance to generalisation. While Woolf and Joyce are able—for reasons peculiar to their respective situations—to embrace a modernist possibility of self-multiplicity in the very structures of their writing (in The Waves and Ulysses, respectively), Forster cannot, finding the idea that multiple characters might project parts of the same view to be violent, a kind of forced self-splitting.  And yet, Forster’s A Passage to India is deeply affected by the radically modern “blurring” (180) and hollowing out of character found in Conrad’s “Heart of Darkness.”  In Fordham’s hands, Conrad’s Marlow reveals a range of partial, incomplete selfhoods experienced as part of writing processes: at one end, the difficult self-consciousness and sense of futility that can come with writer’s block and, at the other, the forgotten self and sense of purpose that can come with full absorption in the work of writing.

Both Hopkins and Yeats are profoundly affected by the audience who is always, inescapably, sometimes painfully, implicated in the acts of writing.  Yeats’ attempt to deal with the experience of split public and private selfhoods, arising out of early publication and public acclaim, is revealed in his juvenile works (Fordham reads the poem “Pan”) through the idea of the “select self” (113), the self selected by itself or others.  But unlike Yeats’ experience with his audience(s), Hopkins’ few readers were often critical, and Fordham argues, quite convincingly, if heartbreakingly, that he seems to find the compression of self into writing—particularly into short lines of poetry—oppressive.  The inability to be sure that what an audience reads in the intention of its author renders Hopkins almost unutterably self-conscious, unable to let his work go (out for publication).

Each chapter in the second half of I Do, I Undo, I Redo includes not only historical contextualisations and literary analyses, biographical details of an author and a piece of his or her work, but also some reproduced drafts (either in the text or as copied images).  In these reproductions, editorial changes are left visible, and handwriting is crammed-in or neat and legible.  Tying drafts to completed manuscripts, Fordham describes which changes appear in final versions, or which versions editors have commonly used.  Seeing the drafts, interpreted by Fordham, lends an overwhelming sense of incredulity at the idea that human beings ever do the work of writing; there is, palpably, a self, right there on the page, that is yet ineffable enough to make it obvious why writing, expressing the self, can be so intensely difficult.  Fordham accords the unknown self a genuine respect; in each chapter of this book, writing is “the paradigm of something proximally mysterious” (74), an analogy for and technology of the self-expressed and to-be-expressed.  This book, then, is not only a contribution to theories of selfhood, but to philosophies of technology, broadly—richly—construed.