Jean-Luc Nancy, The Truth of Democracy 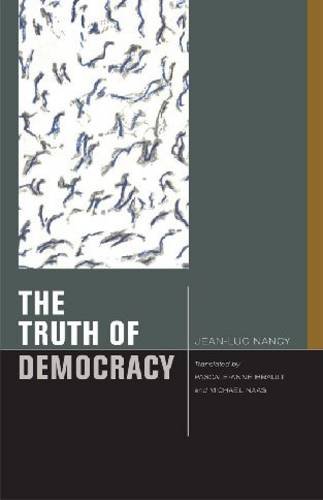 Jean-Luc Nancy first came to prominence in the early 1980s through his depiction of the “inoperative community” (la communauté désœuvrée), which depicted a coming politics that addressed the loss of authority and classical political foundations in modernity. Nancy posited a thinking of politics that could, generally speaking, meet two demands: (1) turn from previous accounts of the political founded on some form of sameness (nationality, race, patriotic narratives), and (2) contest the banal forms of equivalence instituted through late capitalism. First published by Galilée in 2008, The Truth of Democracy is, like most of Nancy’s works, deceptively short, under sixty pages in the English edition. Each chapter, some as short as two pages, offers a dense meditation on the meaning of democracy, and Pascale-Anne Brault and Michael Naas, the book’s translators, have rendered quite a service with an elegant translation of his notoriously thorny prose.

Nancy begins by critiquing those who castigate “May 68”—readers on this side of the Atlantic recognise much of this rhetoric in conservative reactions to the “1960s” in general—as the origin of all that is wrong with contemporary society: a general irresponsibility, moral relativism, social cynicism, etc. These apologists for “managerial capitalism,” he avers, are less interested in the truth of democracy than forestalling all popular threats to their view of politics “in the service of thrifty citizen-workers.” (1) Meanwhile, there is no getting around two facts: that democracy is unrivalled as a name for political aspirations the world over, while it is also used as a cover for anti-democrats who don’t speak their name: freedom, as the second President Bush argued, “is on the march.” In this way, “democracy” becomes a term for that which is not totalitarian, while “managerial democracy” produces a cynicism that any democracy worthy of the name is impossible.

For this reason, while many of those who remember May 68 fault its “surrealist” elements for its inefficacy (“Be realistic: Demand the Impossible!”), Nancy argues these elements instead represent a standing testament to the truth of democracy: this praxis was engaged not in bringing politics into a new model or “world picture,” but instead left itself open to the come-what-may of democracy’s open possibilities. (9)  For Nancy, the truth of democracy means no longer “engendering [political] forms responsible for modeling some historical given that had itself been in some sense preformed…but the exposition of the objectives themselves” (man, community, etc.) “to a going beyond in principle: to that which no prediction or foresight [prévision] is able to exhaust insofar as it engages an infinity in actuality.” (11)  Thus, on the chaotic streets of Paris in May 1968 (and the texts of a generation of writers afterward), “presence was given to greeting the present of an irruption or disruption that introduced no new figure, agency, or authority.” (13)  This openness comes to name the unruly element of any community as it works to unwork the politics that grounds itself in hierarchical modes. For this reason, while politics offers both a risk for democracy, that is, for this “infinitely in actuality” as Nancy understands it, it is also the only chance for democracy, in a manner analogous to the relation between the conditioned and the unconditional in Derrida’s works.

The truth of democracy, though, cannot be found in isolated, sovereign subjects, not simply because of Nancy’s agreement with post-structuralist critiques of the masterful subject, but also because the subject as “self-producing, self-forming, autotelic being in itself” has “found itself to be already surpassed by events.” (11)  Part of what engendered the crisis of democracy, he argues, was that it remained attached to the “a subject that is master of its representations, volitions, and decisions.” (11)  Democratic openness, on the other hand, he argues, is an affirmation that wants to be freed of “every identification.” (14)  For this reason, Nancy argues that the “spirit of democracy” is to be found not only in Rousseau’s thinking of an association or community, but first and foremore in Pascal’s dictum that “man infinitely transcends man [l’homme passe infiniment l’homme],” which both historises the human being and marks its infinite depths. Thus, “what we need” is “Pascal with Rousseau,” which means thinking of a common Being-with that is “a share [partage] of the incalculable…resistant to appropriation by a culture of general calculation—the one named ‘capital.’” (16)  While Levinas before him considered “communism” to be but the most leveled-down apparatus for occluding the asymmetric relation to the Other, Nancy argues that the relation of each to the other is symmetric or horizontal, rather than vertical. For this reason, he argues, while also critiquing Badiou’s Communist Hypothesis, that “communism” is not something that can only “be verified by a kind of political action,” but instead is “our first given,” since “before all else, we are in common.” (54 n.6)

This brings Nancy to reformulating, in Chapter Seven, “The Sharing [Out] of the Incalculable,” his ontology of “singular plural” existence. For Nancy, the truth of democracy is not something extrinsic to our being-in-the-world, but is “an unworking or an inoperativity”—note here the reference to his early work on community—that “is central to the work of existence.” (17)  This “sharing [out],” however, “exceeds politics,” though he argues that politics “makes possible the existence of this share.” (17)  In this way, the democratic is not, in his use of the term, political through and through, even though this excess over the political cannot be given a chance without the right political conditions. Thus, Nancy avoids providing a political ontology in which “everything is political,” which ultimately “leads to disappointment with democracy,” since it is supposed that as a political regime it will provide for an “absolute sharing [out]” that would obviate what “goes by the names of art or love, friendship or thought, knowledge or emotion.” (17)

What provides a way out of nihilism of the present is “the manifestation of all against a background where the ‘nothing’ signifies that all have value incommensurably, absolutely, and infinitely.” (24)  This, he argues, is a “reality principle,” not an empty piety. It is at this point that, though he does not reference him, Nancy’s thinking comes closest to Jacques Rancière’s conception of the fact of equality: “strict equality,” he argues, “is the regime where these incommensurables are shared (out).” (25)  This means affirming both equality and nonequivalence, which itself is “not political,” though politics “must prepare a space for it.” (26)

For Nancy, political action is paralyzed today because “it can no longer be mobilized on the basis of some ‘prime mover,’” and thus his democracy can appear definitely an-archic, that is, without a principle or starting point (archē). As in Rancière, who argues that the democratic always works to disrupt any “police” or state order, Nancy argues that the kratein of demo-cracy is “first of all the power to foil the archē and then to take responsibility” for “the inevitable nullification of general equivalence.” (31)

Nancy is right to argue that after the death of God and the loss of faith in various political theologies, a non-essentialist conception of the political is in order. But here, as elsewhere, he is keen to talk about a politics of sense that itself appears abstracted from the local and meaningful ways in which politics is enacted. It is revealing that he simply argues that capitalism arose from a “fundamental decision for equivalence,” without discussing at all how such a “decision” was made, since this is Nancy’s only stab at describing how an “infinity in actuality,” that is, our ontological status as in-common, could fall into the indifferent world of the political he describes. (24)  In this way, Nancy, like Giorgio Agamben and Heidegger before them both, accede to a view of history that mirrors the rise and fall of Western metaphysics: Heidegger’s analysis of das Man is mistaken for a sociology, and the societal ennui of Western Europe, no doubt powerful, is said to be mirrored across the world.

Nancy will thus argue that Europe “might indeed be the place for putting to the test a truly new sense of ‘democracy,’” the very locus of the end of Western thought. (41)  But why must the trajectory of such an open concept have a place? And must this place find its centre in Europe? Nancy is often eloquent on the legacy of colonialism, but all the hesitations Derrida, for example, put around all his uses of “democracy” precisely because of its European legacy, are absent in Nancy. Finally, while Nancy is right to argue for a deconstruction of certain forms of identity, his affirmation of the “nothing” as the name for the excess of each singular being is removed from the fact that differences happen precisely as an affirmation of something or some sense: of history, of the local, of a tradition, etc. Whatever one thinks of such particulars, many do not want simply to “go beyond” them. Nancy chastises “multiculturalism” as well as a “cynicism” that would “use the idea of free expression to support ‘superstitions.’” (12)  Nancy’s claim here is, of course, vague (he appears to be discussing the multicultural defense of the hijab in France), but one wonders what counts as “myth,” a term of art for Nancy, as opposed to “superstition,” except perhaps that the latter stands for those not enlightened enough to understand the world as being without sense, as Nancy describes. It is puzzling that Nancy takes for granted that the impasses of democracy in Europe and the U.S. are a mark of the political the world over, which itself would be a direct result of impasses in Western metaphysics. But if the age of such world pictures is over, as Nancy himself argues here, what of this picture Nancy himself projects? The truth of democracy, if there is such a thing, should first take on this archaic European supposition, which is itself a haunting superstition, indeed a sovereign imposition, denegating the truth of democracy as such.