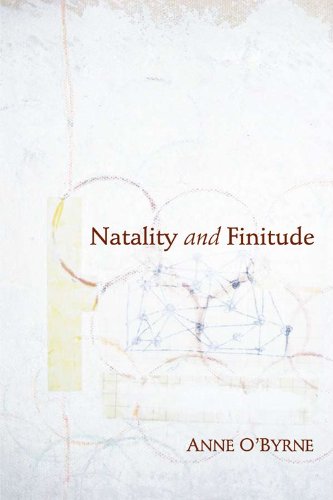 Socrates taught the melete tou thanatou, a vigil on one’s own death, as the essential practice for understanding finitude.  The lesson has been transmitted to us through the Stoic memento mori down to Heidegger’s anticipatory resoluteness. Of the several motifs of Anne O’Byrne’s intricate study, perhaps the most persuasive is that that line of thought is insufficient.  We must look not only west, toward the sunset of life, but also east, to the arising, to our birth.  While the rearward glance may not evoke the angst of death’s future-ward imminence, solitude and, inevitability, ontological considerations are vastly enriched by an investigation of the question “Why was I born?” and its relational implications.  Natality and Finitude follows such a trajectory, from Heidegger to Dilthey, Arendt and Jean-Luc Nancy, to produce an analysis of the ontological pre-eminence of birth that is striking in sophistication and complexity.

Heidegger apparently misses the clue buried in thrownness (Geworfenheit) (and how the call brings “Dasein back to its thrownness”) to this eastward glance of ontology, but Dilthey picks it up in the concept of generation (“procreation, birth, development and death”).  With it, the notoriously weak sections of Being and Time that deal with the Mitsein can be repaired by adding a relational dimension.  “Generation” is a generous term, denoting a process, an activity and a unit of cultural legacy; for O’Byrne it designates “the emergence of meaning in a life that is essentially generational and generative.” (61)  Because human generativity involves—for the most part—a union between heterogeneous sex partners, the singularity of Dasein is necessarily qualified by standing in relation with others.  Each of us is singular by virtue of the coupling of two other singularities.  Combining Dilthey’s thoughts on the Umwelt with the historical phenomenology of Arendt serves to portray the specificity of that bond.  The remaining question regarding the differentiation of a novel singular from plural being is resolved by reference to Nancy’s work.

Although there may be an asymmetry between the two end-points of finitude, birth is the underemphasized pole of ontology.  The child’s importunity “Why was I born?” succeeds in framing the investigation while the background question “What is birth?” drones on. (44)  O’Byrne opens with Sophoclean wisdom on the misfortune of being born but speaks more consistently of the obstetrical event, of the “blood and mucous.”  This line of thinking would seem to lend itself to an ontic analysis (though she acknowledges that there are troubles with the “ontological difference”). It involves a distinction between “first” and “second” birth, between the actuarial and the existential fact that exposes a radical ambiguity in the idea, or as O’Byrne puts it, a “syncopated temporality”: “we come to be and later turn out to have once not yet been.  We are before we can grasp that at one point we were not yet, and this is the beginning of our understanding ourselves as finite beings.” (103–104)  The interval between “births” is thick with experience that is not yet existentiell, not yet appropriated as “one’s own.”  The Augenblick of birth nonetheless opens us to an absolute newness—creativity ex nihilo—that pervades existence.  In this way, our human birth is an exclusive event that informs each and every creative act of our lives; it leaves a signature like a remainder.

That interval, moreover, constitutes the immemorial, Levinas’ and Nancy’s notion, that shares a family resemblance with O’Byrne’s concept of natality: “the non-experience that is the ground—or non-ground—of experience.” (109)  It is the invisible underlining of the sentence of our life—that which singularizes it—and its invisibility (impalpability) is aporetic and perhaps key to the tragic loss that Sophocles’ Silenus tried to articulate to King Midas.  It is always anterior to any point we can arrive at through the vécu and begins to look a lot like that through which Derrida’s différance operates, generating singular newness as it proceeds in the manner of a Whiteheadean creative advance of novelty.  One’s natality is thus a bottomless font from which the endless waters of both creativity and our responsibility to create and to creation emerge.  As O’Byrne puts it, “Birth does not stand for or stand in for the creation; birth is the creation of the world.” (146)

This ground-breaking nature of the analysis of natal relation leaves questions unanswered.  An intriguing one concerns the advent of new life itself.  Is birth the point when there is immunological differentiation of self from (m)other?  It would seem closest to what O’Byrne has in mind when being boils forth ex nihilo, producing an (auto-immunological) identity.  If this is the case, does biology, a science based on ontic presuppositions, sabotage the ontological investigation?  At any rate, the reliance on the facts of immunology in matters of personal identity leaves her (provisional) neutrality with respect to cloning surprising.  There, individuality means “the manifestation in the world of an inner essence, whether that springs from the uniqueness of my genome or from a specific act of creativity by God.” (163)

If birthing is the action of différance on the human condition, can one take a wider view of the meaning of “birth”?  Could we speak not of generation but of regeneration, starting once again?  Is there or is there not an “earliest” advent of difference, an origin, that which Heidegger seemed to seek in the “Anaximander Fragment”?  Is it logocentric to take the child’s question “Where did I come from?” as referring to the blood and mucous that occasioned its arrival on the planet, or can there be multiple births of a self—the question of iteration and rebirth?

The relevance of this book—to crucial debates in continental thought, feminism, and political philosophy—cannot be over-emphasized.  O’Byrne is particularly generous to her colleagues: the text so brims with references to secondary literature that outline the major sources of input to the discussion.  The endnotes point to lines of further research.  The prose is generally clear, engaging, and insightful.  This work should not be overlooked.