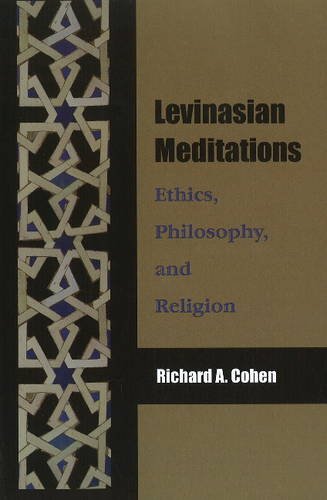 Reviewed by Jordan Glass, University of Alberta. Forthcoming in Symposium.

Levinasian Meditations: Ethics, Philosophy, and Religion is a collection of essays by Levinasian translator and scholar Richard Cohen intended to defend and elevate the philosophy of Emmanuel Levinas on various topics. A revised collection of essays written over roughly the last decade, the book is divided into two parts. The first portion of the book discusses the relation of Levinas to several (mostly 20th-century) philosophers and the second details Levinas’ relation to some Jewish and religious thinkers, as well as his relation to various branches and facets of Judaism.

Part One, “Ethics as First Philosophy,” through several short essays, broadly outlines Levinas’ philosophy and the significance of developing an ethics as first philosophy instead of an ontology, epistemology or aesthetics. Amongst those Levinas is pitted against are Heidegger, Sartre, and Buber; Bergson and Husserl are often present as well. Cohen makes the case that Levinas’ superior phenomenological investigations have revealed the primacy of ethics, while the former philosophers incorrectly put aesthetics or epistemology prior.

Several theses are encompassed in this defense. For example, one chapter offers a short history of philosophical conceptions of time. The only two contemporary, original and distinctive theories of time, says Cohen, are those of Bergson and Levinas. (44)  Bergson’s duration (and Heidegger’s subsequent “appropriation and revision” (46) of this idea) leads to an aesthetic approach to philosophy. The significance of this conception itself ultimately derives, however, from a prior transcendence made possible by an immemorial past (52), a diachrony, that is, by Levinas’ own conception of time—hence the decisiveness of the latter’s analysis.

Another chapter discusses Buber’s criticism of Heidegger, according to which Heidegger’s fundamental ontology abstracts from interpersonal (as well as human-God) relations, and therefore is inadequate as an ontology. However, Buber is still committed to an ontology. He does not exhibit a proper commitment to interpersonal relations, does not sufficiently escape a totality, does not properly recognise transcendence, and therefore does an injustice to the ethical dimension of human being—inadequacies Levinas’ philosophy does not share.

Other essays in the first part of the book are less critical of philosophers besides Levinas. One chapter draws an analogy between the writings of Plato and Levinas regarding their methodological approach and epistemological sensibility. Truth, for Levinas, comes about in “the proximity of two speakers who remain separate yet conjoined” (102); and Plato assumes a similar attitude in his dialogues in which a final, absolute word is not had, but a dialogue is maintained. Another essay on Levinas and Shakespeare discusses the significance of art and literature to philosophy and the non-analytic approach to truth that literature is able to take.

The final chapter of the first part, an interview of Cohen with Chung-Hsiung Lai rather than an essay, offers defenses of Levinas’ philosophy against several criticisms—for example those from a feminist perspective and others concerning animal ethics. The interview is a pleasant change of pace in the midst of the collection of essays, and it also serves to elaborate Levinas’ philosophy on many vital areas in a concise way. The second part of the book addresses the relation of Levinas’ philosophy to Judaism and to other Jewish writers. The general aim of this section is to defend religion (in particular monotheism, and Judaism especially) as being not contrary to philosophy but rather inextricable from it.

The particular theses here, too, are quite diverse. Cohen devotes a chapter to Levinas and Rosenzweig in which, after outlining their similarities, Cohen criticises Rosenzweig for his implicit commitment to a Procrustean systematicity, his lack of clarity of thought, and an arbitrary privileging of Judaism and Christianity (283)—contrary to the pluralistic concrete universalism proper to Judaism. (271) Rosenzweig’s account is overly sentimental and concerned with love as opposed to philosophical investigation and justice. (284)

Another chapter considers evil and the possibility (or rather, impossibility) of a theodicy after the Shoah. Cohen defends Levinas’ claim that the only meaning to suffering can be one’s suffering for the suffering of others. After the Shoah, the meaning or significance we are left with is an imperative to be effectively better than God—to love justice more than God does, to make up with our own sense of ethical responsibility where God seems to have failed. (325–27)  This notion is somewhat paradoxical, a fact that Cohen is surely aware of but does not adequately discuss.

One of the most novel and interesting chapters of the book is “Virtue Embodied,” an analysis of the ethical, moral and philosophical implications and assumptions of the Jewish practice of circumcision and its representation of a responsibility prior to choice characteristic of ethics. The physical wound pushes one beyond mere “pious rhetoric” (294) and shows the prevalence and importance of ethics and morality even in animalistic and sexual dimensions of humanity. (292)

Cohen exhibits a profound knowledge of Levinas’ philosophy, as well as of its implications and relevance to other areas of philosophy, religion and ethics. To his credit, Cohen unabashedly and unflinchingly defends the philosophy of Levinas—with full recognition of this proclivity. Nowhere in his three-hundred-plus-page collection of essays does Cohen criticize Levinas. Cohen admits that, since his time as a graduate student, for him, “Levinas was already the philosopher, the one whose philosophy was truth.” (172)  Cohen believes that Levinas grasps the truth, and Cohen writes to ensure its recognition as such by a wider audience. To this end, Cohen’s book is an extremely well-researched and articulated defense of Levinas on a multitude of topics. However, the unadulterated praise of Levinas sometimes becomes specious and unconvincing. The book is permeated with generalisations about the superiority of Levinas’ philosophy over that of others (though many or most of these claims do exhibit extensive attempted defenses). Passages like this one are standard throughout: “Indeed, each of [Levinas’] phenomenological analyses—of death, enjoyment, work, time, language, and worldliness—correct and displace the earlier and now inadequate analyses of Heidegger.” (283) Cohen repeats this claim with regard to Heidegger (62) and has similarly broad claims throughout regarding Levinas and the various other philosophers and religious writers he discusses.

Cohen displays an extreme reverence for philosophical rigour; insofar as his essays engage with challenges to Levinas from various sources in a concrete way, Cohen exhibits this philosophical rigour himself. However, although he seeks to apply Levinas’ philosophy to several areas of inquiry—either more explicitly or to a greater extent than Levinas perhaps did himself—Cohen is still convinced, as he says, of the fundamental truth of Levinas’ philosophy. Cohen does not propose to take Levinas’ philosophy a step further, or even to make minor revisions, corrections, or criticisms. This is mildly ironic given the description of philosophy conveyed by Cohen on behalf of Levinas. Philosophy is a dialogical, inter-personal discussion, modeled on a Talmudic pedagogy of group-oriented study. One might expect the continual exegesis, and “exegesis of exegesis” (271), demanded of philosophy, ethics and Talmudic study to imply more than just a broadening of the application of accepted truths. Rather, one might expect a philosopher, as a matter of integrity, to harbour the implicit assumption—for ethical-cum-philosophical reasons—that there are no absolute truths, and therefore that all philosophy and ethics demand a more critical attitude than Cohen is exhibiting.

Cohen’s book constitutes a compelling defense of Levinas against a variety of criticisms and opposing views. It is a thorough and often cogent explication of the grandiosity of Levinas’ philosophical accomplishments—but Levinasian Meditations does not go beyond this.