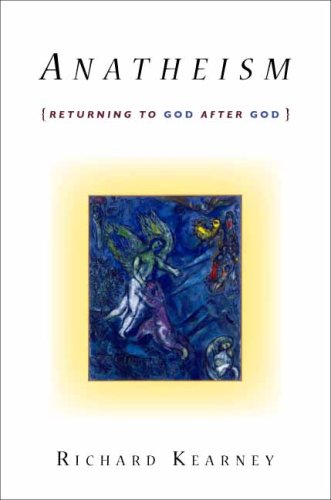 Dominant in continental philosophy’s return to religion is the conceptual distinction between the idolatrous God of ontotheology and the iconic God with/out being that reportedly comes after metaphysics.  While akin to negative theology, this return to God after God is theorized in cognizance of current philosophical considerations and confrontations with the religious, which were originally emergent in the influential work of such continental thinkers as Derrida, Marion, Levinas and Ricoeur.  Richard Kearney’s latest book Anatheism: Returning to God after God is one of the most recent additions to this conversation about the (post)metaphysical.

In his new book, Kearney revisits old thematic ground in greater depth, utilizing original and established source material, while ushering in his neologism “anatheism,” or “ana-theos,” which he translates as “God after God.” (3)  The book therefore presents Kearney’s attempt to synthesize the greater current of thought/response reverberating in the dialogue between continental philosophy and the religious, while also pointing to various antecedents of the contemporary conversation. In development of these antecedents, Kearney proffers anatheism as a third alternative to the “polar opposites” of “dogmatic theism and militant atheism,” describing it as the “wager of faith beyond faith.” (3)  Kearney further explains that anatheism is “what emerges out of that night of not-knowing,” the moment of “abandoning abandonment,” as well as “another way of seeking and sounding the things we consider sacred but can never fully fathom or prove.” (3)  In keeping with Ricoeur, Kearney’s faith beyond faith aspires to liberate its audience from the ideologies and mythologies of “first belief,” advancing a “second naiveté.” (10, 130)  Thus, liberation is hypothetically accomplishable via the reassessment and reconstitution of religious “truth claims,” which are now put into “brackets.” (11)  Through this bracketing, Kearney’s hermeneutic approach presages the recognition of an aesthetically prior optics, a type of matured and quasi-detached “poetics,” which attempts to bring us home to sacramental living through the sober recognition of our “homelessness.” (13)  Such prerequisite homelessness, he believes, makes us ultimately “strangers to the earth” and, if properly observed, can advance the extrication of our religious traditions towards a more thoughtful reinterpretation than previously accommodated by modern models of violent overcoming. (13)

Kearney’s text is divided into ten clearly delineated sections with seven central chapters: 1) In the Moment: The Uninvited Guest; 2) In the Wager: The Fivefold Motion; 3) In the Name: After Auschwitz Who Can Say God? 4) In the Flesh: Sacramental Imagination; 5) In the Text: Joyce, Proust, Woolf; 6) In the World: Between Secular and Sacred; 7) In the Act: Between Word and Flesh. It also includes an Introduction: God after God and a conclusion: Welcoming Strange Gods, followed by an epilogue.  On a methodological note, the structure of the text remains largely consistent with Ricoeur’s temporal-affective naratology.  This consistency is apparent in Kearney’s relaxed implementation of the threefold mimesis, the layout of the existential context of mimesis1 (Chapters 1 and 2), the textual encounter of mimesis2 (Chapters 3 to 5), and the return to temporality of mimesis3 (Chapters 6 and 7).  Thus, the basic structural form of the text also enacts the primal encounter and response of hospitality advocated by Kearney’s philosophical position as it is explicitly outlined in the book’s poetic argument for the God after God.

As with the Biblical tradition and Levinas before him, the ethical encounter has for Kearney the foremost ontological priority.  He adds that this encounter is actualized/interpreted via the imagination, making the imaginative faculty inherently moral and dependent upon the primary moment of wager.  Through a hermeneutic framework of progressive repetition, Kearney proceeds by examining correspondingly motivated Jewish, Christian, and Muslim wagers that also chose, in the face of pervasive heterogeneity, hospitality over hostility.  In contrast to his precursors in poststructuralism/deconstruction, Kearney is additionally concerned with implementing a critical hermeneutic in the movement of this wager of hospitality.  Specifically, he identifies five major components that prescribe the primary process recommended in the event/wager for anatheism. These are: “imagination, humour, commitment, discernment, and hospitality.” (4)

After delineating the existential parameters of his anatheistic framework, Kearney engages three different textual manifestations: the larger religious tradition, the phenomenology of incarnation, and the modern novel. First, in approaching tradition as text, Kearney examines how theologies of divine providence are problematic after the historical nightmare of Auschwitz, which he claims reduces the concept of “divine plan” into merely a “cruel sham.” (58)  In place of a God of infinite power, Kearney advocates a God of “radical powerlessness,” citing several precursors and contemporary consorts such as Etty Hillesum, Hanna Arendt, Dietrich Bonhoeffer, Gianni Vattimo, John D. Caputo, and Catherine Keller. (58)  Second, Kearney interprets our generalized earthly incarnation likewise as a text, looking at the mundane through the reinterpreted perspective of anatheism.  Kearney here examines the tradition of mysticism/pantheism alongside various contemporary theoretical ideas of embodiment.  In specific, he examines here the ideas of such historical personages as Teresa of Avila, Francis of Assisi, Jean-Paul Sartre, Maurice Merleau-Ponty, and Julia Kristeva. Third, Kearny expands upon his encounter with the sacramental mundane by looking at three modern novelists: James Joyce, Marcel Proust, and Virginia Woolf.  The “sacramental imagination” exhibited in these three authors likewise epitomizes for Kearney the celebration of what he calls “the bread and wine of everyday existence,” where the poetic is transmigrated from the sole possession of “High Church liturgies,” and “extended to acts of quotidian experience where the infinite traverses the infinitesimal.” (102)

Following his exploration of the anatheistic repetition in tradition, the body, and the novel, Kearney leaves the hermeneutic space of the text in order to return to the pressing matters of temporal existence, undoubtedly hoping that we have been altered by our encounter with the literary/poetic.  In this return from the text, Kearney’s primary question becomes “what is to be done?” (133)  Kearney’s proffered solution gestures towards an “ethics of kenosis,” or “ self-emptying,” which he moreover indicates points towards “emancipatory action.” (134-35)  To promote this end, Kearney provides models for mimetic cooption. (165)  Devoting the larger part of his seventh chapter to demonstrating how the lives of Doris Day, Jean Vanier, and Mohandas Gandhi exemplify the sacramental, Kearney continues to delineate how each of these exemplars embodies the anatheistic ethos through “challenging the tendency to oppose inner and outer…” (165)  Here, Day is specially recognized for welcoming the oppressed urban poor, Vanier the disabled and wounded, and Gandhi the colonized and oppressed of India. (165)  Furthermore, Kearney expounds that these exemplars “refigure our understanding of faith by encountering the sacred at the heart of the secular world of action and suffering…” (5)  In sum, Kearney calls for recognition of the “embodiment of infinity in the finite, of transcendence in immanence, and of eschatology in the now.” (166)  These appeals, it is important to note, all promote a reduction of strong oppositions by welcoming contradiction.

Not unlike his previous books, Kearney’s new book provides a thought-provoking exchange between the religious and contemporary continental philosophy. The general disposition and groundwork from The God Who May Be (2001) are still evident in the anatheistic project, but here Kearney has taken a greater focus upon the lived experience of sacramental being.  Additionally, there is a larger poetically prescriptive mood emanating from the text, which seems more concerned with enacting cathartic writing and offering exemplars than his past, somewhat more theoretically charged, books.  As such, this book is Kearney’s most intimate to date, and we seem to get a sense of what he is ultimately demanding from religion and humanity.  While the book is most inevitably going to fail to gain approval from strong theology and from strong atheistic philosophers, Kearney nevertheless continues herein to contribute thought-provoking questions about the role of narrative in cultural formation.

Language always, before any question, and in the very question, comes down to the promise.