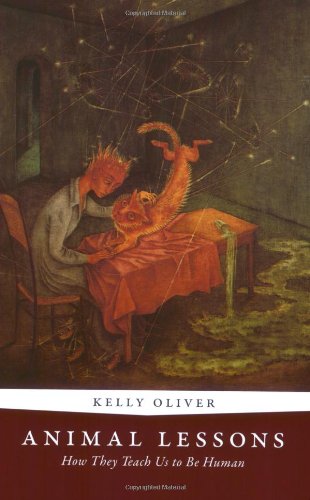 Review by Bronwyn Singleton, University of Toronto. Published in Symposium 15:1 (2011).

Animal Lessons is a rigorous, engaging and thought-provoking account of our relationships with animals and how we learn from them what it means to be human. A well-known feminist philosopher, Kelly Oliver traces how this “animal pedagogy” functions, often in covert ways, across a number of discourses from the Continental canon. Her study culminates in an original and compelling account of what it could mean to evolve a sustainable, “free-range ethics.” Oliver demonstrates how even philosophers of alterity are surprisingly guilty of selling animals short, while simultaneously illustrating how animals often “bite back” in ways that undermine and upset attempts at their conceptual, intellectual and philosophical domestication and training.

The book is divided into six sections. The first section outlines how and why rights discourse and concerns with animal suffering are insufficient for building truly ethical philosophical accounts of our relationship with animals. Oliver’s Introduction and first chapter clearly establish that Animal Lessons goes beyond traditional arguments that leverage either biological continuism and/or metaphysical separation to justify animal abuse or to promote animal welfare. Her work digs deeper to understand what motivates stories of sameness or difference between humans and animals, searching for a path that eschews the limits of either way of thinking. In the five sections that follow Oliver reads ten philosophers to show how their respective work engages animal pedagogy, critiquing how these thinkers often disavow the role that animals play in their own teachings and lessons. Her studies take up the treatment of “the animal, animality and animals” in Rousseau, Herder, Derrida, Beauvoir, Lacan, Heidegger, Agamben, Merleau-Ponty, Freud and Kristeva.

Several themes emerge as Oliver builds her argument. One of the strengths of Oliver’s text is its illustration of the complicity between animal oppression and the domination of women and other marginalized persons and groups (there might be more focus on race, but such want is perhaps supererogatory).  Second, Oliver challenges our thinking on taste and eating, questioning what it would mean to eat ethically and examining the taste for purity that is integral to our philosophical inheritance. Finally, the third major theme is one of responsivity and responsibility. Man and animal are often distinguished based on man’s allegedly unique capacity to speak, a “response” that is cast in sharp relief to the instinctual reaction of animals. It doesn’t take Oliver long to blur these lines and to tie response-ivity to themes of ethical responsibility. These threads work to challenge our ideas about kinship relations, gradually building a case for a new ethics and politics that look to an ecological and sustainable model founded on the “strange kinship” with our animal others that comes from shared embodiment.

Section Two reaches back to address Rousseau and Herder, challenging the romantic myths that have been used to differentiate man and animals. Contra the received dogma, Oliver demonstrates how we cannot distinguish man from the animals based on the assimilation of food, language or logos so that we never really leave our animal ancestors behind. Being human becomes a form of response to the animals, but one that we must take up more ethically moving forward. Section Three offers a prolonged analysis of Derrida’s work on animality in keeping with his hyperbolic ethics. These twin essays engage two themes that will be integral to the evolution of Oliver’s overall argument: good taste or “eating well,” and the intersectionality of animal oppression and the oppression of women. This section also establishes the key role that Derrida’s hyperbolic ethics play in Oliver’s ecological ethics. Derrida’s taste for purity is revealed as a promise that offers an antidote to an absolutist ethics or to the quietism of an ethics that recognizes the impossibility of ever achieving a static good. Section Four’s essays on Beauvoir and Lacan are a somewhat awkward pairing; they seem to be joined as leftovers rather than because of some natural thematic continuity. Oliver reveals Beauvoir’s animal ambivalence by juxtaposing her attempt to highlight the challenges of the female animal while ostensibly arguing that women must disavow their animal nature in order to transcend their reproductive burden and truly exist in existentialist terms and on par with men. The Lacan essay, perhaps the least robust of Oliver’s studies, plays on the themes of language, duplicity and the trace, building to an interesting but ultimately unrealized conclusion about how we must learn to be more cautious of our tracks, treading more lightly on the earth. Part Five’s three essays on Heidegger, Merleau-Ponty and Agamben intertwine to end on a surprisingly sweet and optimistic note. Oliver challenges Heidegger’s claim that his thinking about animality is non-hierarchical, pointing to the violence of the ontological distinction he uses to keep man and animal separated by an “abyss.” Her Agamben essay examines how the anthropological machine legitimates violence against animals and women, arguing that we must stop the machine for the sake of the planet and not just to save “man.” Finally, the essay on Merleau-Ponty leverages his idea of strange kinship to discuss the possibility of finding an opening or opportunity to put us in communion with our animal ancestors based on shared embodiment. This idea of shared embodiment becomes an important touchstone for Oliver’s emergent ethics. Section Six takes on psychoanalysis through two essays on Freud and Kristeva. Heavy on content, the Freud essay addresses how animal kinship works in Freud and how it ultimately serves to disrupt his tales of family romance. Her analysis unpacks a panoply of themes including animal phobias, dream interpretation, Freudian anthropology, the role of mothers and sisters in psychoanalysis and the challenge animal relations pose to the Oedipal family. In her final essay Oliver describes how Kristeva’s attempt to move psychoanalysis beyond its phallocentrist roots is ultimately won at the expense of the animals that often come to function as Other in lieu of woman.

Oliver is clearly dealing with a surfeit of material, inspiration and ideas, so that the essays can sometimes seem a bit busy and over-flowing. They are immensely rich, but they have a tendency to raise rolling bars of questions that could be essays in and of themselves (such as Oliver’s parenthetical remarks on Merleau-Ponty’s substitution of the machine for the animal other, opening important questions of the post-human or her speculations about how animals might become friends or family at the end of the Heidegger essay). I frequently found myself pausing and wishing that Oliver could flesh out and respond to such remarks, while yet realizing that to do so would invite her to write entirely new essays. In some ways this is a luxurious difficulty, but occasionally the feeling that Oliver was piling it on became overwhelming.

The real brilliance and potential in Animal Lessons comes with the much too short conclusion, wherein Oliver begins to sketch the alternate ethics that evolve from her animal studies and as a result of her own animal pedagogy. The sustainable ethics she innovates is based on “ecological subjectivity,” Derrida’s hyperbolic ethics, Merleau-Ponty’s ideas of strange kinship and shared embodiment and the fundamental but often forgotten childhood virtue of sharing. This ethics recognizes that it must be more than an ethics of sameness or difference and explores how these things are always intertwined. Taking on critics who argue that animal studies are indulgent distractions to more pressing ethical concerns about human violence against one another, Oliver challenges that we can ever separate these two streams of abuse. Arguing that man/animal is the original binary structuring Western intellectual thought, she proceeds to say that its dismantling could yet offer the hope for a new and renewed ethics and a path to planetary healing. We are at a juncture in history where a sustainable ethics is an exigency. As Oliver argues: “We need an ethics born from, and nurturing, a transformation from the traditional image of man as conquering nature to one of human beings nourishing it.” (305)  Cultivating our “ecological conscience” means sacrificing human greed for the sake of those others with whom we share the planet. Oliver argues that all living things are responsive and in this sense we all have a responsibility to one another. “Sustainable ethics is an ethics of the responsibility to enable response, not as it has been defined as the exclusive property of man (man responds, animals react), but as it exists all around us.” (306)  Such responsibility is a hyperbolic demand, but one that nonetheless cannot be shirked. Oliver is on the cusp of some fascinating and original thought and research and I hope that this hasty conclusion is also a promise for the future since it opened many lines that had me writing “say more!” in my margins.

Animal Lessons is part of the “Critical Perspectives on Animal Studies” series from Columbia, which explores this nascent field from a cross-disciplinary perspective. The study of animality has become a cottage industry among continental philosophers in recent years and is becoming a popular course subject. Oliver engages not just the canonical texts, but also addresses key voices contributing to the ongoing conversation, including Lawlor, Calarco, Diamond and Toadvine. Her text is suitable for scholars reasonably familiar with continental philosophy who want to brush up on its treatment of the animal, but it is also sufficiently erudite to challenge those already engaged in such debates. Animal Lessons would be a great companion piece to more advanced undergraduate or graduate studies on animality.

Finally, Oliver casts Animal Lessons as a work of mourning dedicated to her cat, Kaos, but ultimately it proves a most worthy labor of love.