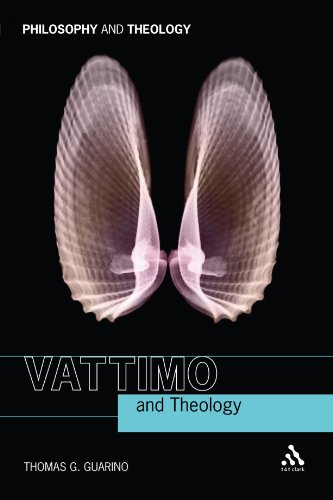 In what has become a prolific dialogue, continental philosophy continues to actively reinvestigate and appropriate the elements of the religious.  This encounter attempts to reconcile philosophy’s inheritance of Nietzschean perspectivism and Heideggerian temporality with biblical themes of prophetic justice and kenotic love.  Thomas G. Guarino’s book introduces several of the major themes and implications of this return to the religious in continental philosophy through a conscientious examination of the later philosophy of Gianni Vattimo.  Vattimo is one of the primary voices of the return to a conversation with religion, and an examination of his thought inevitably leads to a discussion of the theoretical commitments of this return as a whole.  Rev. Thomas G. Guarino, a Catholic theologian at Seton Hall University in New Jersey, describes his work as focusing on a commitment to the Catholic intellectual tradition while graciously engaging in ecumenical dialogue with philosophy and other religious groups.  Guarino’s book on Vattimo is in keeping with his larger theoretical objectives.  Thus, the book serves as a theological recognition and reply to Vattimo’s position, which Guarino diagnoses, in principle, as inevitably nihilistic.

Guarino’s text is broken into five chapters: 1) An overture of Vattimo’s thought, 2) Interpretation, Being and truth, 3) Can a Nietzschean speak of theology? Some historical considerations, 4) Theological dialogue with Vattimo (I): Postmodernity and theology, and 5) Theological dialogue with Vattimo (II): Truth and interpretation.  The book can be otherwise argumentatively divided into two major yet permeable sections, with a third intermediating and axial section.  The first section, which encompasses the first two chapters respectively, is concerned primarily with outlining the philosophical parameters.  Here, the major points of Vattimo’s thought are explained, yet the groundwork is simultaneously developed for Guarino’s later response.  The second section is the theological response itself, which consists of the fourth and fifth chapters.  The third chapter focuses on the underlying primacy of the apparent antagonism, Nietzsche’s influence on Vattimo.

Guarino lucidly explains that Vattimo’s central methodological approach, titled pensiero debole or “weak thought,” operates by employing a characteristically postmodern hermeneutic apprehension of “strong” metaphysical structures. (8)  Guarino speaks of “weak thought” as “an attempt to reconstruct rationality in a postmodern, postmetaphysical way.” (9)  Weak thought, in opposition to strong structures, like orthodox theology, is (un)grounded in a non-totalizing nomadic detachment, which implicitly is a-structural.  This (un)grounding then is the inherently committed Nietzschean element of Vattimo’s thought that Guarino finds so unfriendly to Christian Orthodoxy.

Vattimo’s aberrant Verwindung, despite its development from Nietzschean principles, attempts to return Christianity to the “public square” by reestablishing the theoretical necessity of recognizing philosophy’s own inborn immersion within the parameters of received tradition. (16)  Guarino explains that Vattimo is here motivated by the recognition that the modern attempt to overcome the prevailing system by implementing an entirely new foundation is now recognized by the postmodern as theoretically impossible. (8)  At the same time, like Thomas J.J. Altizer’s Christian atheism, Vattimo promotes a rereading of the Christian calling, in a quasi-Hegelian teleological program of revising Joachim of Fiore’s age of the Spirit.  In this framework, the ultimate destiny of Christianity is reinterpreted as kenotic self-emptying, which is now expressed, however, in secular terms.  In response, Guarino asks, “Isn’t weak thought simply the ‘privatization’ and ‘marginalization’ of religion by another means, the French Revolution absent the guillotine?” (67)

Guarino specifically questions the disadvantages of Vattimo’s seemingly translucent, yet nevertheless denied preference for relativism.  Especially concerning for Guarino is Vattimo’s insufficient resolve when deciding upon the parameters of a constructive hermeneutic method.  While Guarino acknowledges that Vattimo wants to avoid mere “aestheticism” and the irrational immobilization it brings to thought, he is still troubled by Vattimo’s inability to offer a criterion to navigate the disorienting conflict of interpretations. (46)  How is one to distinguish between the rational and the irrational, according to the deconstructive method ultimately advanced by Vattimo? Guarino is uncertain.

Guarino is therefore troubled by the project of combining Nietzschean elements with theology, since he fears that such an encounter fundamentally compromises theology.  Using Luther, Aquinas, and Jean-Paul II as exemplars, Guarino warns about the danger of “subordinating the Gospel to temporary philosophical fashions.” (58)  The issue for Guarino, as presented here, ultimately comes down to a matter of competing narratives: “Either theology is the founding discipline or it is, as Heidegger insisted, simply ontic, regional science…leaving the truly primordial issues of Being and truth to philosophy.” (59)  Vattimo, he argues, has chosen the later.

Guarino makes it clear that the Catholic Church’s official position is problematic for Vattimo, due fundamentally to the primacy of faith demanded by orthodoxy.  In support of the Church’s continued stance of championing metaphysics and its union with Greek inquiry, Guarino references Pope Benedict XVI, who said, approximately, “that the encounter between the biblical message and Greek thought was providential.” (89)  Furthermore, Guarino believes that Vattimo’s originary misguidance shares in what he calls Heidegger’s clever yet unwarranted misappropriation of Luther. (95)  Luther’s concern with Scholasticism, Guarino argues, was guarding against the dangers of an unrestrained “pure metaphysical speculation,” not against metaphysics proper. (95)

In a gesture of reconciled difference, Guarino’s conclusion calls attention to “the desire for God that animates Vattimo’s recent writing,” and speaks positively of Vattimo’s concern for Christian charity and caritas. (142)  However, Guarino finally judges that Vattimo’s “religious idenitity…is entirely reconceived according to his own philosophical faith, a faith that cannot see the ‘unconditioned’ revealed in historical conditionality.” (144)  While Guarino admits that Vattimo wishes to return Christianity back to the public sphere, he also warns that it is at the cost of a betrayal of “its fundamental instincts.” (144)  By accepting the Nietzschean-Heideggerian paradigm, Guarino warns that he suspects Vattimo is “drinking poison from a golden cup.” (144)

Guarino’s book does a good job of clearly encapsulating Vattimo’s engagement with Christianity, and it provides a strong argument for theology proper to ultimately reject Vattimo’s project.  This reply would probably not surprise Vattimo.  Nonetheless, the function of the book is to provide a theological response, which it accomplishes, but the larger stalemates of the continental philosophy versus theology discussion not only remain unanswered, but are not seriously engaged in their larger context. In all fairness to Guarino, this was beyond the intentions of the book.  Nevertheless, Guarino astutely shows that the unbridgeable gap separating faith and reason, to which all these debates between philosophy and theology boil down, persists even in reason’s now weakened postmodern form. (156)  One could probably argue that Guarino’s purpose stops with the recognition of an irreconcilable difference.  The essential debate continues, however, to emerge in various encounters between theology and continental philosophy of religion, for example in the Derrida/Levinas, the Derrida/Marion, and more recently the Caputo/Radical Orthodoxy encounters.

Unquestionably, Guarino has successfully identified that to accept the hermeneutic framework is potentially to open the door to nihilism.  Nevertheless, he fails to engage continental responses to such an accusation, which refute the link between such a framework and nihilism and also show that theology does not guard us from the monstrous any more assuredly than deconstruction.  There is no doubt in Guarino’s mind that a possible nihilism is always inevitably slouching towards a complete nihilism, but this does not directly acknowledge continental philosophy’s continued denial of this inevitability.