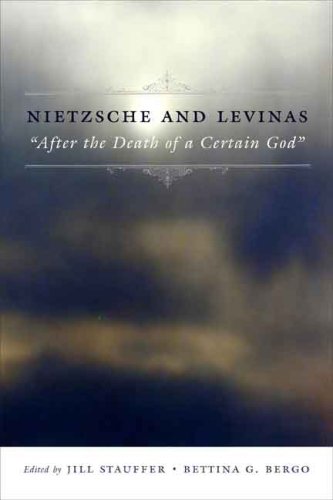 Review by Jordan Glass, University of Alberta. Published in Symposium 15:1 (2011).

Jill Stauffer and Bettina Bergo’s Nietzsche and Levinas is a collection of essays on the thought of two of the most radical and important writers on morality and ethics in a little more than a century. The two philosophers are, on the surface of it, disparate and seemingly beyond dialogue. Famously, for Nietzsche, traditional ethics and morality are supplanted by an egoistic will to power. Conversely, for Levinas ethics is an infinite responsibility to the Other prior to any possible choice. The collection is divided into three broad sections: “Revaluing Ethics: Time, Teaching, and the Ambiguity of Forces,” “The Subject: Sensing, Suffering, and Responding,” and “Heteronomy and Ubiquity: God in Philosophy.” The essays within the respective sections are only loosely connected. I will not discuss each essay individually but offer a general synopsis of what the book has to offer with reference to some of the more prominent works included. The nineteen-page introduction provides a short summation of every essay and should be consulted for an inventoried list and descriptions.

Nietzsche and Levinas serves, first and foremost, to open a dialogue between the two authors. Any comparison—even if this is really to amount to only a contrast—first demands enough common ground such that the respective authors can be seen as engaging with the same topics and similar terms. Two common lines are drawn between Nietzsche and Levinas and are referred to in many of the essays. The first is that, in some way, both authors are concerned with the death of God and the prospect of nihilism. For both the death of God represents a withdrawal of any determinate sense of ground or foundation for ethics and philosophy. (Schroeder, 233)  Drabinski takes this death of idols—perhaps more with Levinas and his contemporary experience in mind—to be the erasure of tradition. It is the demand for a new way of thinking following widespread trauma such as war, natural disaster, and other events that severely disrupt and undermine a group’s traditional way of life. Nietzsche and Levinas meet in the “nothingness” shared in common by those experiencing such a loss. (144)  Similarly, Boothroyd comments on the decisive importance for the two philosophers of our “passage of thought ‘beyond suffering’” (150), our need to attribute a meaning to suffering that saves us from nihilistic despair.

Second is the two philosophers’ emphasis on the body and embodiment, or what Diprose calls “somatic reflexivity.” The significance of this is approached in many different ways by the contributors. Boothroyd claims that the determined meanings of suffering have their root in the bodily pain of material life; that is, for both Nietzsche and Levinas, a moral explanation of suffering depends on the self as embodiment. (155)  Diprose claims that Levinas’s notion of ethical responsibility is made possible by Nietzsche’s notion of the subject as corporeal subjectivity. Responsibility is first made possible by a bodily responsiveness. (118)  This responsive, affective self, Diprose claims, is the basis of will to power. It is the self that is able to adapt and respond to unpredictable circumstances since it is not a static, abstract, idealized self, but an embodied one. It is also the self that is able to will “in reverse” by taking responsibility for things beyond its control (Stauffer, 45); and Diprose claims that this, too, is similar to the responsible subject that Levinas has in mind (though in this case, of course, it is responsibility for others). Finally, Cohen discusses Levinas’s attempt to overcome Spinozism—essentially, ontology and the assumption of a totality—exhibited in different ways by Hegel, Marx, Freud and Heidegger. (165)  What makes Nietzsche’s Spinozism a more potent contestation of Levinas is that it is not “an abstract or intellectualist rationalism,” but a contrary view of embodiment. (167)  Levinas’s metaphysics is pitted against a Nietzschean ontology of the living body.

These two points—the death of God and idols, and embodiment—serve as the basis of comparative evaluation for many of the contributors to the collection. Another point, discussed alone in Katz’s intriguing essay, concerns the similarity of their pedagogical (and broadly epistemological) views. Levinas, Katz says, subscribes to a Talmudic approach instead of a traditional pedagogical model. Truth is viewed as polyphonic and multifaceted—never a discrete, knowable thing. Truth is indefinable, and there is always something more to be learned. (88)  This is exhibited by Nietzsche in Zarathustra’s failure to teach according to the traditional pedagogical model, and also in his praise of the fortitude required to unceasingly search and not be complacent in one’s truths. Though perhaps a seemingly peripheral point, the resistance to absolute truths does seem to lurk in the background of both philosophers’ works, which never seem to give themselves up to finalized acceptance or denial on epistemological grounds. (Bergo, 112)

As one would likely suspect, having established some common ground, many essays in the collection conclude by emphasizing the differences between Nietzsche and Levinas, and attempt to find a way to adjudicate between egoistic will to power and infinite ethical responsibility. The conclusions in this regard are far more interesting and diverse than the presentation of the bare commonalities shared by the two philosophers.

Benso defends Levinas against the charge of being an ‘ascetic priest’ and fostering ressentiment—the most likely objection to come to Levinas from Nietzsche. (Longneaux, 56)  Through a discussion of the nature of negation (the structure characterizing resentment), Benso shows that negation presupposes a totality absent in Levinas’s philosophy. (223)  For Levinas, power must be interpreted as the ability to be the overflowing gift-giver (as described in Nietzsche’s Zarathustra). The role of the other is to make this infinity possible rather than to be him whom my will is exercised over. (226)  The autonomy of Levinas’s self is not at odds with Nietzsche’s demands for a “master morality,” but rather redefines what this autonomy amounts. (230)

Longneaux begins with Nietzsche’s and Levinas’s shared conception of originary subjectivity as enjoyment (48); but he quickly points out that the two accounts radically diverge on the relation to the other. Longneaux denies that Nietzsche has any conception of the metaphysical separation and disquietude of the isolated self necessary for the recognition of an other (65), and Boothroyd makes analogous claims. (159)  Longneaux suggests a possible compromise whereby, in Levinasian spirit, desire for the other is a site of Nietzschean enjoyment; but this requires a compromise in the transcendent nature of the other: we must abandon angelic notions in favour of fraternal notions. (67)

A different reconciliation in a similar spirit is proposed by Messina. She proposes a “gay science” embodied by the creative, innocent child of “The Three Metamorphoses” but freed from the dialectical negativity of the lion. (206)  The child is not power-seeking, something Messina claims always involves negation and is therefore allotted to the lion. The other, for Levinas, is the one over whom I have no power, but who as such always pulls me out of myself and opens up for me the possibility of infinity. (207)  The other represents departure. The child of the “Metamorphoses” can be the welcoming of such joyful possibilities of the future, the other. Messina concludes, “‘innocent’ in Nietzsche does not mean ‘uncommitted’ but rather ‘disinterested,’ out of the erasure of the footprints or the self. ‘Responsible’ in Levinas does not mean ‘moral’ but welcoming, in the summons that brings about a departure.” (208)  Responsibility to the other can be made a kind of gay science or joyful wisdom.

Cohen suggests that Desire can only be satisfied by alterity. He accuses Nietzsche—with perhaps a little haste—of importing conceptions like “will to power” into his philosophy whereas Levinas purportedly stays true to phenomenological investigation. (180)  In the other direction, Butler questions whether Levinas’s ethics does not commit an injustice to the self equivalent to submission to authoritarian rule (72), and thereby threaten the conditions of biological life. (79)  Finally, Bergo suggests that, insofar as Nietzsche and Levinas delve into the conditions of sensibility and subjectivity, the truth of the matter is, by that fact, undecidable. (112)

Overall the collection of essays has a lot to offer by way of mutual critique and synthesis of Nietzsche and Levinas. The similarity between the two authors opens up many avenues of investigation that would be impossible—or at least far more difficult—were either assessed independently. One minor criticism of the collection is that some articles—inevitably—are far stronger than others. However, the large majority of the articles are highly insightful and worthwhile reads, and a few exceptional gems (Benso, Diprose, and Messina among others) more than compensate for one or two weaker papers. Finally, the only substantial fault of the book is its organization. The division of the anthology into three parts might have been arranged, less in terms of broad themes, which were conflated and abandoned within the articles anyway, but according to the very specific content of the contributions. Many of the essays agree in overt ways, and many of the authors’ conclusions pose serious challenges to one another via their respective interpretations of Nietzsche and Levinas. A reader might have benefited from reading a rejoinder to a given contribution in the subsequent essay in the collection. Despite this minor flaw, this collection is highly recommended to anyone interested in the approaches to ethics and morality of Nietzsche and Levinas and the relation between the two.