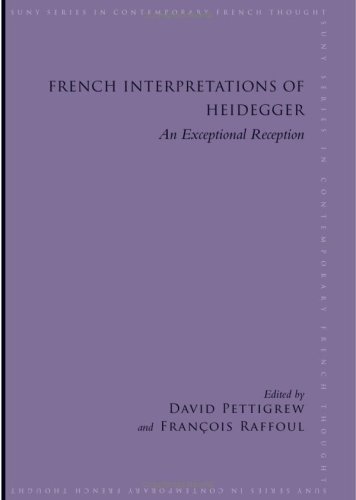 Review by David Tkach, University of Ottawa. Published in Symposium 15:1 (2011).

It is problematic to understand Heidegger’s thought in its North American context without taking into account the transmission of that thought through its antecedent French reception. In the middle of the last century, Heidegger’s ideas made their way across the Atlantic in the French idiom of existentialism. However, scholars in North America eventually came to realize that Heidegger’s thought did not sit comfortably being merely the intellectual progenitor of this movement, but that it had shaped the direction of so-called ‘Continental’ philosophy as a whole. If we also acknowledge the decades-long dissemination of French thought in a large number of academic departments throughout the North American university system, we are seemingly compelled to attempt to come to terms with the French interpretation of Heidegger.

To this end, the editors of this book have made a commendable effort in compiling thought-provoking essays on the responses to Heidegger’s ideas of some of the most important figures in late-modern French thought. They take as their inspiration the prior efforts of the late Dominic Janicaud, author of many works on Heidegger including the two-volume Heidegger en France (the English translation by Pettigrew and Raffoul is forthcoming), and whose essay included here serves as an orientation for many of the general themes of the book. For Janicaud, “the French reception of Heidegger’s thought has been continuously so outstanding, so bright, and so dramatic that it really constitutes an exceptional phenomenon.” (24, quoted by Pettigrew and Raffoul on 3)  A large number of the names under scrutiny here will be familiar to North American readers of Continental philosophy. Others may not be so familiar, for example, Beaufret, Zarader, and Janicaud himself. Some important French philosophers somewhat conspicuous by their absence include Lyotard, Kojève, Badiou, and Ricoeur (only mentioned briefly), not to mention the extremely critical responses to Heidegger from thinkers such as Ferry, Renaut, and, most recently, Faye. The relative lack of treatment of Heidegger’s politics may reflect these editorial choices.

Following Janicaud, the editors wish to emphasize the distinctive character of the French reception of Heidegger’s thought, which for them is chiefly constituted by “the paradox of an encounter between the French Cartesian tradition of consciousness and reason and a thought marked by the German phenomenological tradition.” (1-2)  For Françoise Dastur, Heidegger permitted French philosophers to “free themselves from the context of Cartesian philosophy” (267, quoted by Pettigrew and Raffoul on 2), i.e., to use Heidegger’s insights concerning the ultimate instability and historical dependency of the concepts of “consciousness” and “reason” traditionally understood. Pettigrew and Raffoul stress that “the key representatives of contemporary French philosophy are, to a large extent, critical or ‘inventive’ recreations—as opposed to mere reflections—of Heidegger.” (3)  The most important of these philosophers would end up transforming the intellectual culture of North America, and the book provides the background which “would thus allow American philosophers to undertake a critical archeology with respect to the sources of their own development.” (3, emphasis in original)

The method and style of the chapters vary considerably, but it is possible to determine four main types of investigation here, with of course some overlap: 1) a principally historical discussion of Heidegger’s reception by a French thinker or thinkers; 2) a rehabilitation of Heidegger against a particular French critique; 3) a combining or entwining of Heidegger with a particular French thinker to address a specific philosophical problem; and 4) an analysis of a particular French philosophical response to Heidegger. It is also interesting that three of the chapters deal specifically with the relation between Heidegger and questions of theology. I limit myself to examining one example of each type identified above, in order hopefully to show some of the philosophical breadth and depth of the book as a whole.

Janicaud’s essay opens the volume proper and chiefly consists of a précis of the argument of his Heidegger en France, tracing the overall arc of influence Heidegger has drawn across France. Janicaud treats the story of Heidegger’s reception in France as a “saga,” in the sense that “[i]nstead of an ongoing, consistent reading of Heidegger’s texts, instead of serious, rigourous, academic studies devoted to them, a series of dramatic, passionate, polemical attitudes or interpretations took place” (24), giving as examples brief readings of the Heidegger interpretations of Sartre, Merleau-Ponty, Levinas, Derrida, and Ricoeur. Janicaud also notes that he takes “an external, critical stand” toward Heidegger, albeit making sure not to allow “the essential Heideggerian questions to be forgotten in the process.” (31)  This essay’s interpretive stance, as well as its clarity and passion of expression, naturally whets the philosophical appetite for Janicaud’s own work.

Reginald Lilly’s chapter is an investigation of what he considers Levinas’s misreading of Heidegger: “Levinas renders Heidegger fantasmic…[and], to speak psychoanalytically, this fantasized image of the real state of being has the salutary and compensatory effect of transforming the Real into something tolerable for Levinas.” (35)  Lilly thus considers Levinas to have actively “suppressed” elements of Heidegger’s thought which did not cohere with Levinas’s reading of Heidegger, for example, Heidegger’s critique of the theory/practice distinction, his constant suggestion not to read Sein und Zeit as a philosophical anthropology, and, perhaps most importantly, his critique of a specifically Cartesian dualist ontology/epistemology. Ultimately, Lilly wishes to suggest that Levinas does not confront the real and “horrific” import of Heidegger’s thought due to his substituting an ethics of the Other for what can be considered the ultimate ground of Dasein, “a being-in-the-world evacuated of every being-with” (50) as revealed through Angst.

Alan Milchman and Alan Rosenberg take up the theme of ethics in their chapter, using Heidegger and Foucault in a complementary fashion. As (critical) followers of Heidegger and Foucault, Milchman and Rosenberg stress that they are “seeking no transcendental ground for knowledge as [they] confront what [they] see as a crisis of ‘ethics.’” (106)  They argue that both Heidegger and Foucault saw the origin of the contemporary crisis of ethics in Nietzsche’s proclamation of the death of God, i.e., the death of the possibility of a stable conception of metaphysical and ethical order in which human beings find themselves. Both Heidegger and Foucault address themselves to providing a new conception of human existence after “the death of…the historical form of the subject that had shaped the modern West.” (109)  Milchman and Rosenberg finally understand Heideggerian “questioning” and Foucauldian “reconstitution” to be “two facets of the same process” (122), namely, “an overcoming of dispersion and the fashioning of a self as a unified whole” (123) in light of the lack, and perhaps the impossibility, of discovering a permanent metaphysical and ethical order.

The majority of the chapters of this book attempt to provide a more bipartisan or objective analysis of the relation between a particular French thinker and Heidegger. I take as one exemplar of this approach Allen Scult’s chapter in response to Marlène Zarader’s excellent study, La dette impensée, which argues that many of Heidegger’s concepts have direct parallels in Jewish theology. Zarader argues that Heidegger holds an unexpressed and, more importantly, unthought dependence on biblical thought. Scult addresses both Zarader and the important American philosopher of religion, John D. Caputo, and claims that one can find in both thinkers the suggestion to Heidegger “to build his ontology upon two pillars” (236), the Presocratics and Judaism. Scult also concludes, I believe rightly, that “the basis of Heidegger’s ontology, that is, the way he is given to ‘speak’ it is, in fact, ‘fundamentally religious,’ but it is not religion identified, or identifiable, as such.” (242)  It is to this book’s great credit that one of the most important issues in Heidegger’s thought for North America, that is, its religious connotations, is addressed while taking into account the French perspective on the issue.

It is unfortunate that we do not find a uniform method of citation throughout the book, although this is understandable considering that these chapters were drawn principally from a conference in 2002 (in addition to certain invited chapters). Additionally, as is the case with any edited volume, the quality of the chapters is not entirely consistent. In the end, however, this book is extremely useful and important both for scholars of Heidegger and specialists of French thought. One final thought, though: at no point do the writers in this book approach what some call the inherent “linguistic chauvinism” of Heidegger’s thought, that particular languages express relations to Sein better than others, pithily expressed by his statement in his posthumous Der Spiegel interview, conducted in 1966, that “[w]hen [the French] begin to think, they speak German.” It is arguable that Heidegger himself finally believed his French reception to be, in a sense, a diminishing of his most profound—as most profoundly German—insights. In order to approach the French reception of Heidegger properly, this belief must at least be considered, especially with regard to its ramifications for the predominantly English North American audience to which this book is directed.