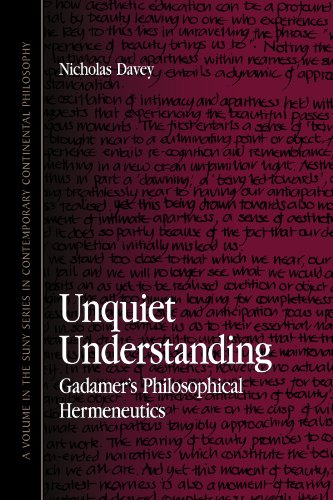 Review by Santiago Zabala, ICREA/University of Barcelona. Published in Symposium 15:1 (2011).

There are two groups of hermeneutic philosophers in contemporary philosophy: those concerned with the legacy of Gadamer’s philosophical hermeneutics and the ones interested in the consequences of hermeneutics. Both groups contain direct and indirect disciples of Gadamer, that is, some who studied in his seminars and some who never met the German master. Although Gadamer’s preference for either group is irrelevant, it is certainly interesting to notice his admiration for those philosophers (Michael Theunissen, Richard Rorty, and Gianni Vattimo) who, at his one-hundredth birthday celebration on February 12, 2000, insisted on the consequences of hermeneutics rather than on his own indispensable contribution to the discipline. Although everyone in the hall captured his interest, his response to these philosophers’ talks, as well as his own exchanges during the past fifty years with thinkers such as Jürgen Habermas, Ernst Tugendhat, and Jacques Derrida, indicate his curiosity toward hermeneutic encounters, debates, and dialogues with other philosophies. Despite endorsements from Richard Palmer and Jean Grondin (two fervent defenders of Gadamer), Nicholas Davey’s book does not focus on Gadamer’s legacy in order to recognize his contribution but rather brings to bear the conflictual and provocative stance that is inherent to hermeneutics. This must be why the author states in the first pages of the book that “this is not an essay on Gadamer per se. Though he may have coined the term philosophical hermeneutics, what is at play within the movement of thought it represents far exceeds his authorship.” (xi)

Today, hermeneutic philosophy has moved not only beyond Gadamer’s legacy but also against some of the cardinal elements that he defined and that until now were considered essential components of the discipline. Davey offers eleven theses that suggest how “philosophical hermeneutics has a provocative character more radical than is often supposed” (xiii), that is, where understanding instead of being a “quiet process” leads to an “unquiet event.” These eleven theses assert that philosophical hermeneutics

(1) requires difference, (2) promotes a philosophy of experience, (3) entails a commitment to hermeneutic realism, (4) seeks otherness within the historical, (5) reinterprets transcendence, (6) entails an ethical disposition, (7) redeems the negativity of its constituting differential, (8) affirms an ontology of the in-between, (9) is a philosophical practice rather than a philosophical method, (10) constitutes a negative hermeneutics, and (11) recognizes the mysterium of linguistic being. (xiii)

As we can grasp from theses 1, 8, and 11, the goal of Davey’s book is to venture into “what the experience of understanding entails” (xiii), in other words, what happens to us when we understand something. If, as Gadamer taught us, we understand only when we understand differently, then there is a particular ontological dynamic within the process of understanding that also “deprive[s] hermeneutic consciousness of any certainty of interpretation.” (xvi) However, such deprivation and the “weakness” of hermeneutics in the face of a final interpretation, explains Davey, are, in fact, “its strengths,” (xv) given that these are what allows change into the world.

As all readers of Gadamer know, the German master uses the Bildung argument primarily to demonstrate how, alongside the scientific body of knowledge (which still dominates our general metaphysical culture), there exists another knowledge that is not constituted by the “results” of scientific experiments, technological proofs, and objective truth, but rather by the “effect” of our traditions. Bildung implies the formation, cultivation, and education of the interpreter, that is, a process that allows “Bildung haben,” that is, “becoming cultured.” Nevertheless, unlike other hermeneutic philosophers, Davey does not analyze the Bildung in order to accuse or defend Gadamer once again for promoting bourgeois education or political conservatism through tradition, but rather to expose the ontology that shapes the possibility of understanding. Although becoming cultured (Bildung haben) is always enabled by our rootedness in a given culture (Bildung), as Davey explains, there is “a complex ontological interdependence between Bildung haben and Bildung” (40), which are both also indispensable for our ability to understand scientific, technological, or objective results. However, what is this “ontological interdependence,” hence, Being?

Bildung haben requires the prior existence of a specific Bildung. However, no Bildung or culture can sustain its being without being renewed by the various processes of Bildung haben which constitute it. Bildung is therefore also ontologically dependent on Bildung haben. The being that is Bildung is transformed by the understanding it facilitates. (40)

This significant passage of chapter 2 shows how hermeneutics is an “antimetaphysical philosophy” because it does “not posit an ‘ideal’ humanity that education should anticipate and be disciplined by,” but rather implies “that humanity is a species whose very essence is always in question.” (45)  Such a species, instead of believing in a truth capable of withstanding all assaults, prefers to engage in dialogues, conversations, and fusions with different Bildungen in order to become transformed “by the understanding it facilitates.” (40) This is why Davey admirably explains that what “is transmitted as tradition is not necessarily received as transmitted [because] reception is interpretative.” (50)  As we can see, the “ontological interdependence” I mention above is not what is transmitted or received (Being as presence), but rather the “transformative processes” (Ereignis of Being) that enable new understanding. However, this new understanding is not the outcome of a peaceful or quiet exchange between the Being of a hermeneutic subject and the being of a tradition’s subject matter, but rather an engagement of “critical tensions” (53) that sustain it. This is why central to the “dialogical notion of tradition,” explains Davey, “is the idea of a continuity of intellectual conflict.” (xii)  The inherent ontological conflict between the Bildung and Bildung haben that this book exposes indicates not only how understanding is constantly an “unquiet event” but also how it will always be a failure, that is, how it is hermeneutical. Knowledge (through Gadamer and other hermeneutical philosophers before and after him) has become the “dis-position” of thought, that is, the recognition that truth will always be an event of interpretations rather than the result of a process.

This brief review has not analyzed several other themes (e.g., ethics), concepts (e.g., transcendence), and authors (e.g., Wolfgang Iser) that Davey’s confronts and that are essential to achieving a better understanding of his eleven theses. Nevertheless, considering the recent literature in continental philosophy, Davey’s exposure of the subversive, provocative, and conflictive character of hermeneutics remains the most innovative aspect of his text.