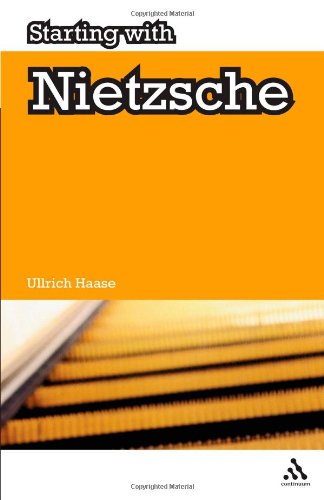 Review by Jordan Glass, University of Alberta. Published in Symposium 15:1 (2011).

Ullrich Haase’s Starting with Nietzsche is one of a series of introductory books purported to provide  “clear, concise and accessible introductions” to influential philosophers. The book is divided into four chapters which collectively are intended to span the breadth of Nietzsche’s philosophy. The first chapter in itself covers a wide range of topics: Western metaphysics and the Platonic paradigm, the claim that history is the sole subject of philosophical inquiry, the philosopher as legislator, and the genealogy of Nietzsche’s solution to the problem of freedom and necessity–his conception of love of fate–out of Leibniz’s metaphysics. The second chapter discusses the nature and goal of philosophy given Nietzsche’s turn away from Platonism, the historical-subjective nature of truth that follows from Hegel’s influence on Nietzsche, and history and philosophy as self-creation. Chapter three discusses the relation of science to religion and art; Haase offers an account of science as a nihilistic descendent of religion and discusses the significance of science as an art which no longer recognizes that it is one. Finally the fourth chapter discusses the Eternal Return of the Same and attempts to reconcile and explain the ontological and ethical interpretations of that thought; it also deals with the Higher Men, the Last Men and the Overhuman and discusses the way in which the thought of Eternal Return is intended to transform us and bring about the end of the Platonic paradigm.

Haase’s book attempts a virtually impossible goal: to sum up the philosophy of Nietzsche in all its breadth in a short, accessible, less-than-two-hundred-page book. The book as a whole is a partial success in this regard. It exhibits most of Nietzsche’s primary ideas and successfully integrates them into a cohesive account of the philosopher’s thought. The book is particularly insightful on a few subjects. One is Haase’s portrayal of the freedom-necessity problem and its solution in Nietzsche’s amor fati (love of fate), and his accompanying discussion of determinism versus fatalism. As well, Haase’s portrayal of the development of Nietzsche’s thought out of Leibnizian and Hegelian thought is especially interesting and helps the reader grasp the historical significance of Nietzsche’s contributions to philosophy. The latter is especially helpful and Haase’s aptitude for the history of philosophy comes through. Haase also connects discussions to earlier themes in the book, often in subtle and insightful ways. For example, he takes the “Three Metamorphoses” in Zarathustra to characterize the progression of Nietzsche’s thought within Nietzsche’s life, as well as the history of thought in the West—though not in quite the way that Nietzsche usually does. In the same vein, Haase’s discussion of the significance of history in Nietzsche’s philosophy is compelling and well presented. (Haase reiterates throughout that for Nietzsche history becomes the “sole” content of philosophy, beginning with the claim made on page 26.)  These few highlights will prove the book to be a worthwhile read, even for those with substantial prior exposure to Nietzsche’s philosophy.

More debatable is how the book would fare with the uninitiated. Contrary to the claims and aspirations of the “Starting with—” series, the reader would strongly benefit from a previous introduction to the history of philosophy before reading Haase’s book. A student without a vague understanding of the Platonic origins of Western philosophy and some basic overview of several of its more prominent philosophers would likely have a difficult time penetrating the thought in this book—which attempts to compress much of this history into a short introduction to Nietzsche’s thought. Even the portions of the book focusing exclusively on Nietzsche’s thought (without particular reference to the historical context) often demand some acquaintance with Nietzsche’s writings. Many of his terms are taken up by Haase as though they were conceptually familiar. The terms “being” and “becoming,” for example, appear throughout the book, yet their distinction is never discussed as such. As another example, the only section devoted explicitly to will to power is a five-page conclusion at the end of the book—the implicit assumption being that the reader has a more-or-less basic idea of its general significance such that the rest of the book has served to do the legwork for its explication. Haase’s assumption of at least a basic familiarity with many of the terms in Nietzsche is unproblematic for an experienced reader, but likely problematic for the student approaching these topics for the first time.

Another difficulty with the book is the slightly deceptive portrayal of Nietzsche’s thought as more systematic than it really is. True, Haase briefly alludes both to the seeming presence of contradictions in Nietzsche’s thought (129) and to the significance of contradiction to Nietzsche’s thought (e.g. Haase’s claim that wisdom is for Nietzsche the ability to entertain many contradictory modes of thought (66)), but as a whole it is depicted as a philosophy easily yielding to cohesive, coherent, systematization. This is confirmed by the publisher’s information on the back of the book which claims that, “the book shows that, despite Nietzsche’s notoriously anti-systematic approach, his philosophy in fact constitutes a coherent and unified body of thought.” Were it obvious that Haase is offering a personal, particular reading of Nietzsche, his confident depiction of Nietzsche’s thought as if it harboured no rampant ambiguity would be justified. However, being that Starting with Nietzsche is recommended for those without prior exposure to Nietzsche’s writings, Haase’s depiction of Nietzsche’s thought as something easily summed up in a cohesive system is extremely misleading. Haase rarely mentions any of the controversy surrounding interpretations of Nietzsche’s thought. (To my recollection, he only refers explicitly to another commentator of Nietzsche once (on page 19)—Walter Kaufmann—only to dismiss him in a few sentences; he mentions “commentators” in general on page 129.)  Ignoring the ambiguity in Nietzsche and almost all the contentions surrounding his philosophy both misleads uninitiated readers and misrepresents the material in a genuine way.

Related to these problems is Haase’s sporadic use of quotations and citations. Nietzsche’s writing—to a greater degree than that of most other philosophers—relies on the specific style of language in a crucial way (and this is indeed a point that Haase mentions). However, the beginning of the book exhibits a dearth of verbatim quotations—granted these do become much more frequent as the book progresses. Many of Nietzsche’s thoughts are only summarized, seemingly with the aim of simplification (perhaps a forgivable shortcoming for a book intended as an introduction), but still with some loss of original content. Furthermore, even where quotations of Nietzsche’s original works are used, Haase often cites only the volume and page number of the complete German edition, with no mention of the title of the work in question. This makes it difficult for the Anglophone student (and probably as well for the German-speaking student without the Montinari-Colli edition of the complete works of Nietzsche) to consult the original sources.

As a whole the book is well written and serves as a good summation—keeping in mind the great difficulty of this task—of the general significance of Nietzsche’s thought to the history of philosophy. However this book is less than ideal as a first exposure to Nietzsche’s thought.

When a man has filled his mouth so full of food that for this reason he cannot eat and it must end with his dying of hunger, does giving food to him consist in stuffing his mouth even more or, instead, in taking a little away so that he can eat?