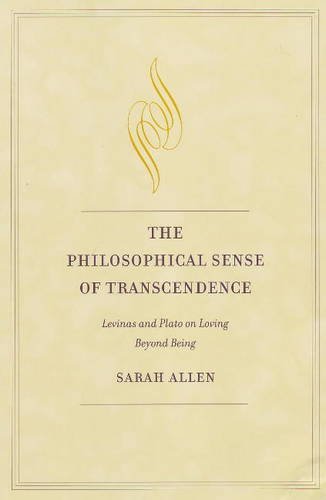 Sarah Allen, The Philosophical Sense of Transcendence: Levinas and Plato on Loving Beyond Being. Pittsburgh: Duquesne University Press, 2009; 330 pages. ISBN: 978-0820704227.

Review by Tanja Staehler, University of Sussex. Published in Symposium 14:2 (2010).

Sarah Allen’s book is concerned with the philosophical sense of transcendence, understood as a movement which exceeds or crosses boundaries. Some take this notion to be incomprehensible, while others believe that it belongs to theology rather than philosophy. In view of this, Allen wants to explore the relation between religion and philosophy, the definition of philosophy, and the sense philosophy can give to transcendence. Throughout the book, Allen explains her questions and ideas in general rather than technical terms; this is one of the many features that make her work so clear and enjoyable to read.

Emmanuel Levinas is singled out to address the question of transcendence because he brings a radical, “vertical” sense of transcendence into philosophy by relating it to the infinite or God. Such transcendence is the object of Desire. On the subject of transcendence and desire, Levinas finds a great predecessor in Plato.  For both, Allen wants to show, Desire involves a dimension of affectivity, and at the same time, the movement toward transcendence appears to be a process of purification.

Allen’s book thus pursues the topics of Desire and transcendence from Levinas’ early works to Totality and Infinity (TI) and finally to Otherwise Than Being or Beyond Essence (OB). The study provides a coherent and convincing narrative of the development of Levinas’ philosophy; such a comprehensive narrative is still a rare accomplishment in Levinas studies. The book is divided into two parts, comprising four chapters each. The first part is devoted to the themes of being and totality. Chapter 1 turns to Plato and explores connections between becoming, being, the Good beyond being, and erotic love. Particularly convincing in this chapter is a careful discussion of the Good beyond being. Allen points out that despite Levinas’ insistence that the Good beyond being was Plato’s greatest insight, the concept of the Good beyond being is far from clear in Plato himself. It is only mentioned once throughout the Platonic corpus, in the Republic (509b); moreover it is not clear how much weight can be placed on this thought, given that the other allegories appear to identify the Good with being. (19) It is therefore reasonable to ask whether the Levinasian emphasis on the Good beyond being might rather be a result of the Judeo-Christian concept of God as creator ex nihilo. (52)

Chapters 2 and 3 pursue an insightful discussion of suffering and enjoyment as the darker and lighter sides of being. The significance of these ideas for Levinas’ early and middle work is brought out well, with the help of links to Heidegger. Through these different dimensions of affectivity, we arrive at the notion of a separated subject. However, in order for this subject to remain in separation, a relation to transcendence is required. The need for a relation to transcendence has thus been established, but there is no opening toward it yet; death functions as a preparation in this respect. Chapter 4 concludes the first part with a discussion of death, which is seen as “totalizing” in traditional philosophy (that is, as endowing our existence with a sense of completeness), but functions as a preparation for the openness to transcendence in Levinas.

In the second part of the book, Allen discusses Levinas’ treatment of love from his early philosophical writings to later developments in his work. Chapter 5, appropriately shorter, traces the development of love in the early texts as it emerges from a more general discussion of affectivity and is concerned mostly with fecundity. In this context, Levinas mostly refers to Plato in a negative or critical fashion. The two subsequent chapters are concerned with the extensive treatment of Eros in Totality and Infinity. Chapter 6 locates Eros in relation to other main topics of Totality and Infinity such as affectivity, desire, and thought. In particular, this chapter carefully attends to the tension between Desire as affectivity and Desire as thought. According to Allen, there are “metaphysical, ethical, and religious approaches to Desire in Totality and Infinity” (209) and Levinas compromises the clarity of his account by not really differentiating between them.

Chapter 7 opens with a helpful overview of the literature on Eros in Levinas, including works by De Greef, Marion, Thayse, Mosès, Katz, Sandford, Bergo, and Chalier. Allen outlines the position of her research in relation to the literature in a nuanced fashion, attending also to the difficult issues surrounding fecundity and femininity. In this discussion, Allen returns to the three different approaches she has outlined in the previous chapter, and traces difficulties that emerge from insufficient attention to the differences between metaphysical, ethical, and religious dimensions of Eros. Allen argues that, in both Plato and Levinas, love emerges as a process of purification.

Furthermore, even though the metaphysical, ethical, and religious approach in TI may not come together so easily, they are all needed for Levinas’ conception of philosophy. Allen is right to point out that these relations are not easily resolved in the later work either, and cannot be, especially if one wants to avoid reducing one realm to the other. As she puts it: “Paradoxically, I think it is in emphasizing the ambiguity surrounding transcendence in his later works, especially insofar as it enters meaningfully into philosophy, that Levinas offers us a somewhat clearer (but by no means crystal clear) account of the interplay between philosophy, ethics, and religion.” (301)  Allen points out that in the later work, there is a religious sense of ethics that “precedes and exceeds philosophy.” (302)

Allen’s study is written in an exceptionally clear and lucid style, and as a reader, I always know what question is being considered in a given paragraph and how it relates to the overall argument. It is quite rare, nowadays, to find studies which hold together in this fashion. Even rarer is it to find an author who can present the Platonic, phenomenological, and religious influences on Levinas in such a competent fashion. I am already looking forward to Sarah Allen’s next book.