Sarah Borden Sharkey, Thine Own Self 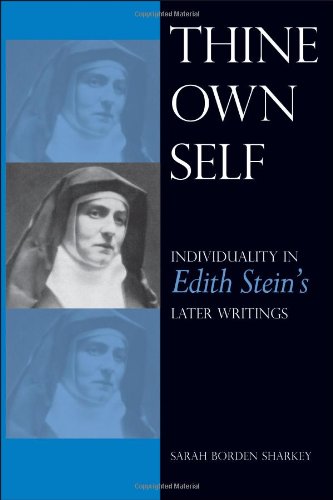 Sarah Borden Sharkey’s latest book tackles one of Edith Stein’s hardest texts and one of her more controversial personal and philosophical periods.  Thine Own Self: Individuality in Edith Stein’s Later Writings focuses on what Edith Stein called her “magnum opus,” Finite and Eternal Being. This work, originally published as Endliches und ewiges Sein, was Stein’s mature reworking of her original Habilitationsschrift, Act and Potency. The work tries to bring together her phenomenology with her work on mediaeval Christian thought, especially Augustine of Hippo, Thomas Aquinas and Duns Scotus.

Considered by classic phenomenologists as somewhat unorthodox, as Husserl himself thought it was more a work of Christian philosophy than phenomenology, and viewed as not wholly accurate and consistent qua certain views of mediaeval scholarship, Stein’s work has been the object of much critique and debate. And though Stein wishes to reconcile aspects of both philosophical schools, her project is not one of trying to make phenomenology fit with mediaeval thought or vice versa. Rather, she wishes to present a philosophical understanding of the relation between finite and infinite being, always drawing upon both schools of thought. She does so, as Borden Sharkey makes amply clear, in various ways. Whereas traditional Husserlian phenomenology does not concentrate much on the category of the infinite, it still has something to say about how we make intelligible the lived-experience of our finite being in the world.  Furthermore, though mediaeval philosophy can certainly yield categories and concepts that may be used to understand the infinite being that we normally associate with God, it does not do justice to the value of conscious lived-experience, especially in terms of consciousness and the finite I-ness of such consciousness.

Stein maintains that there is an intimate relation between finite and infinite being, the human being and God. Rather than use traditional arguments concerning the analogy of being or participation to mediate the relations between human beings and God, Borden Sharkey maintains that a fuller discussion of individuality reveals how humans and the divine can relate.  In particular, it is the discussion of form, understood as a principle of intelligibility (xvii–xvii), that serves as the key philosophical framework whereby one can begin to understand individuation and personhood as both affirming and distinguishing the relation between finite and eternal being.

Borden Sharkey’s treatment of form and individuation in Stein’s later work is both thorough and philosophically illuminating.  I believe this to be the best treatment of the topic that we have to date.  The book seeks to achieve two fundamental things. First, it wishes to expose and lay out for its readers how we can grasp and read Stein’s very difficult treatise. This is a welcome commentary and makes much sense of what I have found to be dense and sometimes obscure passages in Stein’s thought.  Borden Sharkey does not hesitate to identify where Stein is unclear, but she insists that we must try and read these passages within the larger structure of the work.  The second aim of the book is to take up the argument concerning the role of individuation in Stein’s later works while not neglecting relevant passages on individuation in Stein’s earlier, more strictly phenomenological works.

Chapters one and two define the problem of individuation and set it within the general context of forms. One question that immediately comes to this reader’s mind is how and why we should employ a so seemingly out-dated concept such as form to discuss human identity.  And if we do discuss such a concept, are we simply not engaging in issues within the history of philosophy? Borden Sharkey makes an important argument here, maintaining that form is a viable concept today, if we understand it in conceptual terms as a principle of intelligibility.  She avoids lapsing into idealism, however, because she admirably shows how form, understood in intellectual terms, has existential and real import.   Chapters three through six address the problem of individual form from various aspects: Individual forms are considered from the perspectives of essential structures, being, principles of individuality, and mereology (the study of parts and wholes).  The latter treatment of mereology certainly has deep resonances with Husserl’s Third Logical Investigation.  It is in the aforementioned chapters that the core expository chapters of Stein’s doctrine occur. The remaining four chapters take up various challenges to Stein’s theories of individual forms, offering alternative readings of various problems raised. For example, Stein’s theory of formal individuation raises problems concerning possible ensuing hierarchies, especially given that Stein’s ontology draws from traditional Scholastic frameworks that were rich with such concepts as grades of being or the great chain of being.  Borden Sharkey notes that Stein’s response to the hierarchisation of being can be applied to the relation between God and humans as both are very different beings and God is traditionally considered a higher being, but when it comes to human beings, we all share one nature and belong to one human race and human community. (160–3) Political, ethical, social and theological challenges are raised by Stein’s notion of individual form. Borden Sharkey not only delineates such challenges but she also offers us possible solutions to the challenges; she also admits there are times when Stein’s philosophy falls short of delivering adequate or clear answers.

In general and by way of conclusion, four significant points stand out as important for Stein scholarship and philosophy in general.  First, there is the tension between idealism and realism, which follows Stein throughout her whole life. If individual form is understood as a principle of intelligibility that purports to be able to explain what one finds in individuals and communities of human beings, one wonders how the relation between mind and world is to be negotiated. Borden Sharkey is very right to claim that Stein sees a deep corresponding relationship between mind and world, but Stein herself never fully gives an account of how these two realities come together and condition one another except by way of her small essay and dialogue on Husserl and Thomas Aquinas, written on the occasion of Husserl’s 70th birthday.  For the most part, Stein assumes there is a mind-world correspondence and works from this assumption, but no systematic account of how these two very intimate but distinct realities coincide is given.

Second, Borden Sharkey raises the issue concerning the role of time as it relates to essences. (70ff.)  How can an essence be both subject to time and timeless?  And how can our very essence change through time and perdure?  Drawing on the work of Hering and Stein, Borden Sharkey makes the distinction between essence and essentiality—the double doctrine of essence. (65ff.)  Stein accepts the Husserlian position that though essences or Wesenheiten can show the identity of something over a period of time, they can also change. But there is a more encompassing sense of essence that bespeaks more perduring realities, including the essence or being of God and the essence of what it is to be human across the ages. This double doctrine of essence allows us to have both a shared or common human essence that crosses borders and cultures, and a particular, individual essence that is unique to the individual human person.  Here, essences overlap and are enfolded one into the other.

Third, Sarah Borden Sharkey makes an important contribution regarding the Steinian treatment of empathy (Einfühlung). While it is true that Stein discusses human individuation in her early texts as stemming from a personality core that is understood through empathy, Borden Sharkey reminds us that even in this purely phenomenological account the essence or idea (read: form) of how another is re-presented to me in consciousness comes to the fore.  In this way, Stein’s early phenomenology that deals with the question of individuation is not seen as split from her later Christian philosophy.  Borden Sharkey reminds readers that the phenomenology is taken up again in Stein’s later texts but one can also read backward and see Stein’s later work as an elaboration of her earlier work on human individuation.

Finally, I would like to draw the reader’s attention to Borden Sharkey’s alternative readings of individual forms. Drawing form Stein, the author sketches possible ways of conceptually framing the question of identity, including adverbial individuality. (190)  Interesting is Borden Sharkey’s defence of Aquinas’ matter as the principle of individuation. (230)  Stein rejects material form as individuating, showing her proclivity to Scotus’ position.  Though Stein has much to say about the lived-experience of the body in her earlier work and in her Münster lectures, the body does not occupy such a prominent place in her later work, especially Finite and Eternal Being. Borden Sharkey challenges Stein on this point and invokes Thomistic arguments on the importance of matter for form—essences and individuation require deep differentiation within the material realm.

Thine Own Self: Individuality in Edith Stein’s Later Writings marks an important contribution to Stein scholarship, phenomenology and philosophy in general.  Borden Sharkey captures the spirit of Stein’s project, which is not only some kind of proposed synthesis of Christian mediaeval thought with Husserlian phenomenology but also a genuine attempt to understand the nature of finite and infinite being. Key to understanding this structure, so Borden Sharkey argues, is the question of individual form. This work is scholarly, rigorous and will serve as a guide for those interested in understanding the philosophical itinerary of Edith Stein and those interested in approaching the question of personal identity from rich, philosophical, and creative perspectives.