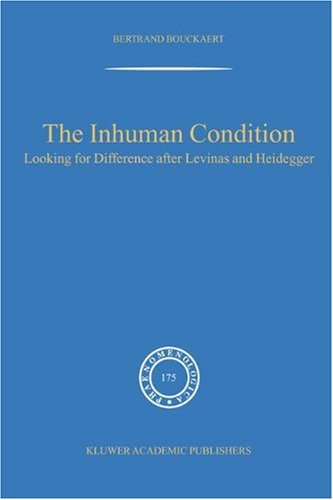 Rudi Visker’s The Inhuman Condition is a collection of nine chapters flanked by introductory and concluding essays, arranged thematically in three sections. Their purported motivation is the current preoccupation with difference in European philosophy and social thought. While most appeared previously as stand-alone essays, they share certain tropes—most prominently the relation of facticity and difference to subjectivity, and the notions of responsibility, anxiety, and flight. Unfortunately, a number of the essays retread similar ground and succumb to excessive signposting and uneven tone, which suggests a lack of editorial vision.  I am inclined to think that the book would have been stronger had the essays been comprehensively reworked into a monograph. This criticism aside, Visker nonetheless proves himself a noteworthy critic of Heidegger and Levinas through the provocative interpretations contained in the essays.

The book’s first part sets the stage for Visker’s interrogation of the metaphysical underpinnings of the present fascination with multiculturalism. Portraying a liberal conception of cosmopolitan society, he notes the significance of social institutions in maintaining individuals’ autonomy.  The expectation that arises from this conception, and which Visker criticises, is that anxieties about cultural differences can be dispensed with once the majority recognise their own reliance on cultural institutions themselves. Given this picture, the common move of enlisting the help of Levinas in admonishing cultural chauvinism may seem reasonable. However, Visker finds it over-optimistic to suppose that one’s attachments (qua attachments) can co-exist with others’ in this way. After all, for Levinas, one’s sole attachment is to the Other. Visker sees a respite from this potential deadlock in Levinas’ discussion of the way responsibility is mitigated by other Others. While this dynamic may make concern for the Other pragmatically possible, it also engenders the need to interrogate our own cultural attachments. Moreover, Visker warns of the tendency to obscure this need through the denial of the very notion of such attachments.

Next, by construing attachments as deeply held values, Visker hazards an analysis of disputes that seem to run so deep as to admit no possibility of resolution. He suggests that Dasein’s tendency towards flight in the face of thrownness accounts for the Stimmung that accompanies such disputes. He notes the considerable ambivalence in the role of Dasein’s facticity. On the one hand, Dasein will always misguidedly look to its concrete mode of being for guidance in that responsibility to be its being. But this “flight” will also never be more than the confirmation of this selfsame responsibility. Visker’s contribution here is the suggestion that this ambivalence is a cause of the anxiety vis-à-vis the Other. It is not simply that Dasein covers its having-to-be, but it encounters a trace of this fact in the encounter with the Other, particularly when the Other is a fellow disputant.

Pursuing the theme further, Visker questions the sociological claim that today’s society exhibits an upsurge in anxiety. Reformulating Heidegger’s lightning rod pronouncement, he describes the mechanism of anxiety as “the nothing no longer nothings.” (69) Since the nothing, so described, is not mere absence, but the background against which objects come into relief, this recapitulates Heidegger’s claim that in anxiety the world of significance falls into indifference. It allows Visker to suggest that anxiety is perpetually lurking below quotidian life, because that which triggers it is the mechanism at work in allowing quotidian life to show itself as such. The “frantic behavior” often cited as the cause of widespread modern anxiety is then more accurately understood as the idle attempt to fill the world with activity to flee an ever-possible anxiety. Unfortunately, Visker’s explanation for the origin of this anxiety is less compelling than his analysis of the sociological claim; anxiety, according to Visker, is triggered by the confrontation with the fact that there are values other than our own, and “because of this, our relation with our values has something arbitrary about it.” (74) He advises against vainly attempting to banish anxiety outright, suggesting that we should instead adopt cultural forms that would structure it and “bring it into culture by imposing on it a rhythm…” (75)

In section two, Visker turns his attention towards similar themes in Levinas. First, he explains a duplicity in Levinas’ later thought: the Other injures or unsettles me, yet in so doing, intrigues and commands me. To explain how the Other is able to open up responsibility despite the trauma of the encounter, Visker compares this injury to the trauma-structure elicited by Lyotard in his analysis of a shock without affect. First, some event occurs which leaves no psychic mark (the shock without affect); it then only becomes legible as traumatic later on by virtue of a second, neutral event which gives impetus to the trauma (affect without shock). For Visker, the first scene corresponds to the initial “shock” of creation, which cannot affect us. The encounter with the Other is the second event and evinces the trace of the first scene. Rather than the paralytic effect this has in neurosis, the trauma of the Other has a positive role such that it singularises us in responsibility.

Next, Visker argues that Levinas cannot escape a privative conception of evil since he cannot conceptualise irresponsibility other than as ignoring the command of the Other, as “the refusal to accept a responsibility that one nevertheless has.” (124, emphasis added)  Attempts to define evil otherwise overlook that any such indifference is subsequent to the responsibility that has been established through the encounter. The command of the Other is like an invitation: one can ignore it, but doing so cannot erase it. Having received the command is to have such a responsibility, and any indifference becomes non-non-indifference because it is colored by the encounter.

Visker’s disputing of Levinas’ privative conception of evil wherein every indifference is lacking in “non-indifference” makes for one of the most compelling sections of the book. Reintroducing facticity into the discussion, he questions the extent to which (pace Levinas) the Other must precede her form. Cautioning that it is not accurate to indicate that the other is a “fellow human” as some prominent Levinasians have done, he nevertheless suggests that facticity (referring to it here as a person’s context) may play a role in motivating one’s non-indifference towards the Other. If this is the case, there would be a kind of indifference that would precede my responsibility to the Other without being evil, since it would provide the occasion for this responsibility.

Visker follows this thread further, construing irresponsibility as the inability to be rid of our factical attachments. He emphasises that it is not appropriate to expect the Other to have to do this either, intimating that to deny one’s attachments wholesale is to deny the Other her very facticity. On the one hand, my own attachments may motivate the manner in which the other can become Other, and on the other hand, the Other may refuse to give up her cultural attachments. There is considerable difficulty in elaborating these attachments and Visker diagnoses the current vogue of deference to the Other as one particular response to the inability to elaborate them.

In the final section, Visker begins by arguing that Levinas and Heidegger are closer than they have been made to seem. For Heidegger, Dasein unsuccessfully flees from the fact that it has to be its being. Such flights are inauthentic because they allow Dasein to avoid facing up to itself. In Existence and Existents, Levinas describes the movement whereby a being comes into being out of anonymous, indistinct Being (the il y a), but the price to be paid for this is an inability to be rid of oneself. There is hardly anything cowardly about such flights for Levinas, who sees in the tendency to escape the il y a a liberation. Visker suggests that the emphasis on flight as a revealing structure in both is “formally analogous,” but adds that Heidegger’s insistence in seeing flight as a failure is uncharacteristically privative.

Chapter 8 reassesses anxiety in light of Visker’s  previous discussions of facticity and attachments. While Dasein always gets its answers to its demand to be its own being from its facticity, this facticity cannot determinately “root” its being and is itself a way of fleeing from the demand. Yet, even the flight from anxiety purportedly leaves a trace of Dasein’s fundamental uprootedness. Visker wants us to see facticity as an indeterminate rootedness and suggests that this “non-ontological difference” has pushed itself to the fore as something we have to deal with. The final chapter engages Lyotard’s notion of the differend to discuss the relation of politics to ethics.

At its best, The Inhuman Condition convincingly discusses some provocative issues in Heidegger and Levinas and challenges some orthodox positions reached in the scholarship of these philosophers. However, having been sufficiently convinced by Visker of the importance of facticity and difference to subjectivity and of their obstinacy in the face of rational explanation, I find the positive suggestions he makes, such as adopting cultural forms to impose a rhythm on anxiety, or interrogating one’s attachments, disappointingly tentative and vague. The ably synoptic conclusion leaves no doubt that Visker is capable of a more focused treatment and provides evidence for my claim that a monograph addressing these issues would have been more satisfying.