Drew Hyland, Plato and the Question of Beauty 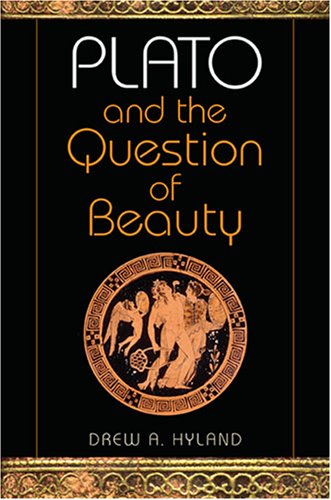 There is a strain of thought, both among Plato scholars and in the general analytic tradition, which maintains a strong intellectualist view about the aims of philosophy. In Plato and the Question of Beauty, Drew Hyland makes the case that beauty, as it arises in the Hippias Major, Symposium, Phaedrus, as well as the Second and Seventh Letters, functions as a category of transgression for Plato. In other words, a close analysis of beauty reveals the two-fold “limits of logos.” (111)  Hyland is up front about his intentions: his aims are selective, not exhaustive. Despite this admission however, one is still left with the sense that his general thesis ought to be buttressed by further evidence, both textual and scholarly.

Despite Hyland’s rehearsal of the entire Symposium in the second chapter, the last three speeches are most relevant to his overarching thesis. Aristophanes focuses on the incompleteness of eros, thereby reinforcing a certain tragic view. Agathon, in direct contrast and in want of emphasizing eros’ comedy, is the first one in the dialogue to explicitly connect eros and beauty. Eros is completely beautiful and young. It is left to Socrates to synthesize these two positions and to draw whatever was true from the initial speeches. Subsequently, Hyland gives appropriate attention to Diotima in Socrates’ speech, especially her occupation as a seer and her gender. The well-known ascent sections—206c and later at 210a—figure prominently in Hyland’s analysis. In both ascents, “the body must be transcended philosophically, but just as surely, philosophy begins with the body—and ‘transcendence’ of the body does not necessarily mean a ‘leaving-behind.’” (53)  This coalesces well with Plato’s love for the whole. Another crucial feature of the ascent is the form of beauty, which constitutes its apex and is oude tis logos, oude tis episteme. (211a)  Hyland translates this as “neither some discursive account nor some demonstrable knowledge.” (57)  That experiencing beauty itself would make us live virtuously (211e-212a) implies that the apex of the ascent is merely penultimate. For Hyland, it is unclear to us modern observers how the experience of beauty itself can generate virtue in us. He leaves it to the Phaedrus to offer a response.

Accordingly, the third chapter’s analysis of the Phaedrus expands on beauty, eros, and philosophy as they developed in the first two chapters. The figure of Phaedrus himself is central; Hyland argues that Phaedrus has an unrefined love of speeches (or logos). The admiration for logos makes him an attractive interlocutor to Socrates, but his love needs to be tempered. The sudden arrival of Socrates’ divine sign triggers the palinode and there follows a list of four kinds of divine madness—prophetic, religious, poetic, and erotic. That “eros is a form of divine madness” (71) implies that genuine philosophy contains an ineliminable non-logical component. This is so in two senses. First, there is an initial non-discursive (or noetic) experience that produces in us the desire for logos.  Second, with sufficient devotion to logos, some enjoy a culminating noetic experience such as the form of beauty as expressed by Diotima in the Symposium. Hyland does however note a difference between these two dialogues. In the Symposium, the form of beauty would enable us to understand all manifestations of beauty but in the Phaedrus, experiencing individual instances of beauty prompts us to recall beauty itself. They are compatible insofar as we situate them amidst the two sorts of non-discursive experiences that encompass logos. Both are, as well, in agreement about the paradigmatic experience of beauty, namely the beauty of the human body.

The Second and Seventh letters are the subject of the fourth chapter. Hyland chooses to bracket off the question of their authenticity. Instead, he aims to pursue the ways in which both letters deal with the non-discursivity of philosophy. This is by no means a straightforward goal, especially given that there are obvious dissimilarities between the two. In the Second letter, for instance, Plato clearly wants to impart some sort of wisdom, but nevertheless expresses a deep need for secrecy. (312d-313a)  The justification for secrecy is that the wisdom is deceptively simple so as to be “easily misunderstood.” (93)  There follows the paradoxical assertion that Plato himself has never committed his views to writing. (314c)  Rather, the dialogues are works of Socrates become “beautiful and young” (kalou kai neou). For Hyland, this is a puzzling ascription because not only is Socrates usually presented as an elderly man, but he is also characteristically ugly. Thus, Hyland favors an alternate translation of both terms: neos ought to be interpreted as “new” and kalos as “noble.” In the former, Hyland argues that Plato has created a new, tendentious “Socrates” in his dialogues and that this creation disagrees with historical reality. Furthermore, in becoming noble, the Platonic Socrates has a strong moral character not necessarily shared by the historical figure. For Hyland, Plato aspires to make philosophy a credible pursuit and attempts to achieve this by idealizing the historical Socrates. Rather than emphasizing secrecy, the Seventh letter makes a stronger claim, namely that the very nature of philosophy prevents it from being written. Hyland identifies two reasons. First, philosophy is an experience and cannot be fully captured as an experience by logos. Such an experience is lived and requires a great deal of dedication and time. Second, the culmination of this experience is a noetic happening wherein philosophy itself is born. Against this backdrop stands the puzzle of the Platonic dialogues. Hyland argues that Plato writes in order to encourage us to adopt a philosophical way of life.

In the final chapter, Hyland returns to the Phaedrus in order to engage with its critique of writing. There has always been a scholarly debate about the bipartite nature of the Phaedrus; Hyland surmises that the transition from eros/beauty to writing/rhetoric is to be situated again in the figure of Phaedrus. His response to Socrates’ palinode reveals that he is only moved by rhetoric, thereby making the content derivative. Socrates employs a strategy that blurs the lines between rhetoric and philosophy such that genuine rhetoric will be philosophy proper. At 274b-c, Socrates shifts from discussing speeches to writing and its association with memory. Whereas in the palinode Socrates connected reminding (hypomnesis), memory (mnesis), and recollection (anamnesis) as enabling us to achieve knowledge of beauty itself, the story of Theuth and Thamus suggests that “reminding”―the function of writing―is of lesser value than memory and recollection, and so ought to be rejected. This is, no doubt, a puzzling claim, and similar in form to the cleavage between Books III and X of the Republic. Hyland does note a general softening of this rebuke later on; the caveat that expresses the limits of writing does not necessarily condemn its use in a more purified sense. (275c-d)  Hyland proceeds to rehearse the five objections to writing―two from Thamus and three from Socrates―and evaluates Plato’s own writing in light of them, ultimately concluding that in the dialogues, Plato found a discursive form that allowed him to “take the risk” (132) of writing.

There are worthwhile sections in the book―analyses of the final speech in the Symposium and Socrates’ palinode in the Phaedrus come to mind. Nevertheless, one is left with the distinct impression that Hyland has cherry-picked certain dialogues rather than confronting all the relevant material.  Given the trajectory of the final four chapters, the Hippias Major seems expendable. Moreover, consider the Republic. Even though Hyland casually alludes to its denunciation of beauty, he fails to engage with it. This is especially peculiar given that both the Symposium and the Phaedrus tend to extol beauty. The result, in my view, is a disappointing effort.