Catherine Malabou, Plasticity at the Dusk of Writing 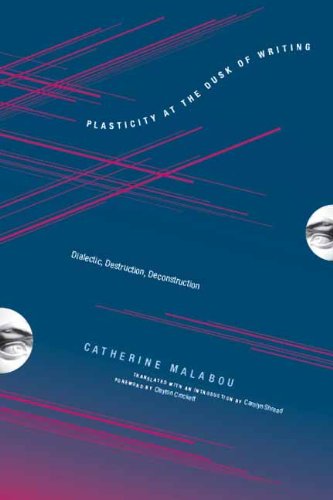 “We should be certainly engaging deconstruction in a new materialism,” Catherine Malabou writes in Plasticity at the Dusk of Writing, a conceptual self-portrait of her notion of “plasticity.” Malabou in the past has gained the admiration of not just Jacques Derrida, her former teacher and eventual collaborator, but also Slavoj Žižek, who cites her approvingly in his Parallax View. In the present work she manages to shake loose of tired debates over textual theory and the Hegelian dialectic in order to diagnose the “motor scheme” of the contemporary era, which she conceives as a quasi-Hegelian correlation of philosophical reaction to what has “gradually asserted itself as the style of an era.” (1)

Plasticity, first published in French in 2005, opens with a consideration of the “transformational masks” discussed by Claude Lévi-Strauss in The Way of Masks. These masks provide an apt metaphor for the shifting faces Malabou has taken on in her academic career. Her tack is to provide something of an intellectual autobiography, one that is less a personal history than a reenactment of the conceptual struggles she has gone through and which mirror those of philosophy in modernity. The “transformational mask” itself is metamorphic and is not form-fitting, such that it can never reveal the face underneath. Split in two halves that fold in the middle to reveal one mask and then fold back out to reveal another, this mask is really a mask of masks, a play between the veiling and unveiling of what can never be revealed underneath. Inasmuch as the difference between the two masks within the mask is only thinkable in relation to its mutability, and inasmuch as the sign function (the particular “face”) of any given mask is similarly a posteriori to this mutability, Malabou finds in these “strange objects” an apt expression of the “interchangeability or conversion relation between plastic and graphic, image and sign, body and inscription.” (3)

The mask is also a fitting image for the play of Hegelian dialectic (the mask’s coming together after a temporal delay) and Derridean différance (the endless deferral and differentiation between and within the masks) in her work. Malabou notes that these two logics are irreconcilable, and her early writings, such as The Future of Hegel (Routledge, 2005), were an attempt to tease out the relation of these two systems of thought.  I can not do justice to the entirety of Malabou’s analysis here, and readers are warned that the very movement of Malabou’s thought, its own plasticity, is more beneficial to follow than her conclusions.

She argues that her thinking of plasticity, first found in Hegel’s Phenomenology, gained coherence in Le change Heidegger, where she rethinks “plasticity” as the “change” and “trans-formation” that is the “motor scheme” of Heidegger’s philosophy. The play of masks in Malabou’s philosophy has been the confrontation of the logics of Derrida and Hegel, but also those of Heidegger and Freud, and she has presented each of these “faces” in turn, using one to read the other, eventually “showing [her] the incredible contemporaneousness of philosophy, its closure, and beyond its closure.” (8)

It is Malabou’s contributions to thinking the “beyond” of the end of the metaphysics that will be the focus of the remainder of this review. “We need, in the wake of deconstruction,” she writes, “to bring the trace up to date” (77). What Malabou proposes is that previous “motor schemes” are in some sense passé. What is needed now is not a thinking of negativity of the self-relation (Hegel) or the temporal delay of writing (Derrida) but a thinking of mutability where form and content, as in the transformational masks, fold in on one another. (20) Her claim is not simply philosophical: she reads plasticity as at the heart of Hegel’s dialectic and a certain “change” to be found in Heidegger’s account of temporality, but she is also arguing that “plasticity is the systematic law of the deconstructed real, a mode of organization of the real that comes after metaphysics and that is appearing today in all the different forms of human activity.” (57) This is where Malabou’s “new materialism” appears in the most danger of a certain idealism, since she implies that the scheme by which philosophical concepts are adumbrated help bring about “the end of writing” and a “change of era”: “to think,” she writes, “is always to schematize, to go from the concept to existence by bringing a transformed concept into existence.” (1, 13)

Malabou is not asserting the absolute end of writing—just as Derrida’s discussion of the “end of the book” didn’t obviate the need for libraries—and for this reason she turns to the notion of “dusk” in her title, which has resonances with post-structuralist depictions of the closure of metaphysics as well as Hegel’s flight of the owl of Minerva. Occupying the shaded ground at the end of history, the motifs of deconstruction, dialectics, and plasticity mutually transform one another, and it is this very mutability that is the mark or, better, form of the latter. The Hegelian period was marked by what Foucault called in Les mots et les choses the “empirico-transcendental doublet” of subjective identity, and Derrida’s project was announced in response to the transformations underway with the ascent of non-phonetic writing. Malabou takes seriously Derrida’s claims about an “epoch of writing” in the beginning sections of Of Grammatology, where he argues that it is not simply his choice to focus on the science of writing, since it is the paradigmatic sign—our metaphors are purposeful here—of an era in which genetics, computer programming, and set theory question the originary myth of writing as subservient and linked to a self-present speaking subject.

Thus we are led to ask, given Derrida’s own metaphorology of signs, differential marks, traces, etc., if another set of metaphors is not more apt today, given the historical transformations since 1967, the year Of Grammatology was published. Reading Derrida closely, Malabou claims there is an unspoken “mutability” at the heart of deconstruction; not least in Derrida’s notion that archi-écriture is a “transformation” of the meaning of writing in the everyday sense. In this way, she argues plasticity offers a “new reading method,” since it is attuned to the mutability and “trans-formation” of concepts themselves. (51) Ultimately, this leads Malabou to question the Derridean trace structure, since she argues that the trace, as a trace of the Other, points not just to the past, but also to the Other of any given system. Malabou’s analogue to Derrida’s use of “writing in the everyday sense” as a pass key into originary difference as archi-writing, as she argued in What should We Do with Our Brain? (Fordham, 2008), is neuroplasticity.

Following up on a Jean-Pierre Changeux’s Neuronal Man: The Biology of the Mind, which is now twenty-five years old, Malabou argues that the plasticity of the brain symbolises its ability to “form or reform information” and its very structures. As Malabou notes, there has been a “transformation” in the structures of thinking about the brain in the last forty years, namely from one in which the brain and its parts are inexorably programmed by DNA—a model that Derrida notably utilises in Of Grammatology—to a notion of plasticity in which supposedly gene-based characteristics such as gender, sexuality, and even the ability to perceive different types of objects mutate and change as a result of experience. Thus, what we have is an ontological underdetermination of the brain whereby “plasticity forms where DNA no longer writes.” (60)

Plasticity therefore provides a self-transformative conception of being that marks the place of transference between Hegelian self-identity and Derridean différance. As Malabou notes, the Greek plassein means both to receive a form and to mold or give a form, and the plasticity of the brain both gives and receives any particular conception of self-hood. And this self-transformation operates, she argues, without the necessity of a trace, since as often happens for example in patients who lose all short memory, there is a complete loss of the self, such that one cannot even mourn what is lost. This points to the third meaning of plastique to which Malabou refers, namely the type of plastic explosive used in various badly plotted action movies. In light of this “explosive” plasticity, “neuronal traces don’t proceed as do writing traces, they do not leave a trace; they occur as changes of form.” (79)

Malabou pivots from these discussions to provide enriching alternatives to Levinasian transcendence. She argues for an immanent materialism in which there is no Other of the world, but simply and inexorably the world as it is. It is here that her favored example or metaphor, however, breaks down, since there is no neuroplasticity without the outside, without an experience of that outside reshaping and utterly transforming the mind. There is much to Malabou’s attempt to treat the brain as an immanent set of mutable circuitry, but it is notable that this “self-transformation” is always done in response to the Other, for example, as found in the use of the prosthesis of a cochlear implant that in some experiments helps some of those who are deaf to form in other parts of the brain the cells used for hearing. How this should attenuate Malabou’s chosen paradigm, she does not say, except to argue that the brain is itself transformative of the other to which it responds (presumably brains are the inventors of particular prostheses, or affect the environment outside any given brain). It is also unclear why an immanent, materialist philosophy would stop at the brain in the first place, since most of what is discussed in her work in terms of the brain are, of course, faculties of “neurological” systems that are throughout the body.

What Malabou offers, despite these caveats, is a thinking of transformability inherent, but not made explicit in the thinking of Hegel, Heidegger, and Derrida. Her work is relatively short in length at ninety-six pages, including a preface by Clayton Crockett and her own afterword. But slipped into what may seem a modest autobiography is a work that seeks to do nothing less than transform the intellectual landscape around it. This work is transformative enough that it might just succeed in doing so.