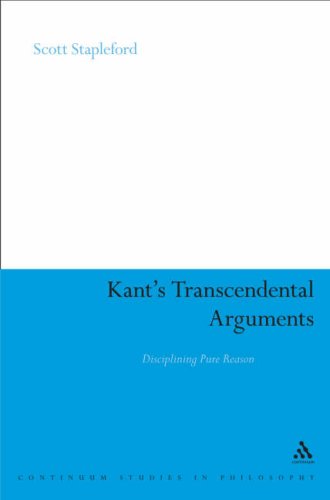 Stapleford begins with a recapitulation of the impact of Stroud’s noted paper “Transcendental Arguments” and a summary of its two-pronged argument. First, Stroud objects that even though transcendental arguments prove the impossibility of sceptical claims, it is still impossible to deduce the necessity of the material world from this. Second, he contends that the success of transcendental arguments against the sceptic depends on a verificationist principle within the argument that renders its transcendental quality superfluous. Stapleford rejects Robert Stern’s attempt to recast Hume’s normative justificatory scepticism as Kant’s target in order to mitigate Stroud’s objection. Seeing no evidence, Kant wished to address the viability of a belief-forming norm that justifies the belief in the existence of an external world. Stapleford sees such justificatory concerns as rather unKantian, and he points out that Kant’s gripe “is that the objectivity of outer representations can only be inferred if representations are interpreted as being the effects of things existing in themselves behind the appearances…wearing no marks of objectivity on their own faces.” (22)

Kant wishes to show that objectivity lies in the phenomenal realm, not behind it, and so his target is the view that doubts that our experience is indeed of outer objects. Far from being antagonistic toward the concerns of scepticism, “Kant hopes to achieve the same goals as scepticism…[but] wants to do so ‘scientifically’” (25), through a principled application of sceptical objections. If this is the case, then Stroud’s objection is relevant to Kant only insofar as one understands Kant’s argument in a manner that distorts his intentions. After all, Kant leaves any issues regarding outer objects independent of their appearances outside the scope of reason. Stapleford argues that transcendental arguments indicate the way we must conceptualise appearances in order for us to have experience at all. Therefore, these arguments are not simply dispensable once a verificationist principle is adopted, and so Stroud’s objections do not include Kantian transcendental arguments in their scope.

In the second chapter, Stapleford specifies the role of transcendental arguments in the Critique’s overall programme, arguing that they allow Kant to navigate the double requirement of going beyond conceptual analysis, without those intuitions needing to be given empirically. (41) Stapleford refers to “possible experience” as the mechanism that gets Kant beyond that impasse and offers an interpretation of the Second Analogy in light of this, such that two concepts  (like “event” and “cause”) may be intentionally different with respect to the pure concepts, yet have the same extension; they are reciprocally co-instantiated with each other in the object: “if it turns out that the instantiation of some a priori or empirical concept presupposes the simultaneous instantiation of another concept in the same intuition, then perhaps we could come to recognize this by simply reflecting on the way that manifold has to be ordered in the imagination if it is to count as a possible instance of either of those concepts.” (51)

A significant consequence of this is that the critical usage of concepts is contradistinguished from their dogmatic usage since they can only be applied to phenomena and not to things in themselves independent of any possible experience. They “cannot even get started if they do not restrict their scope to the empirical world” (61), and in this manner the transcendental method is self-restricting.  In terms of Stapleford’s overall argument, this outlines what it means to Kant for a concept to have objective validity and allows him to argue for such objective validity while leaving the issue of objects’ existence independent of experience untouched (if not to affirm that it is irrelevant altogether). Nonetheless, the conflation of “possible experience” with “possibility of experience” (46) leaves the question of the difference, for Kant, between the nomological connection of two concepts and the necessity of one concept in the cognition of another, underdeveloped.

Stapleford examines the Refutation itself in Chapter 3, arguing against the claim that its addition in the second edition of the Critique is evidence that Kant changed his position in the interim. The contention is that the argument, which holds that my consciousness of my own existence as determined in time is conditioned by something persistent in perception outside of me, commits Kant to a realist position with regard to this persistent object whereby it exists independently of us even though its characterisation is not independent of us. (70)  Stapleford challenges this interpretation, advocating a phenomenological reading of the Refutation instead, which holds that the objects in question are both empirically objective and spatially “outside” us, but avoids commitment to a realist ontology with respect to them. In spite of the possibility of such transcendentally external objects, “there is no reason to think that the transcendentally external thing makes inner time determination possible. It is more likely that the sensible representation of this correlate makes inner experience possible, not the unknown correlate itself” (73–74), thus supporting the phenomenological reading. What is required instead are “object[s] ‘outside’ of us” (74) which “qua spatial, are known to be only phenomenologically distinct from the subject.” (75)

Stapleford takes Kant’s “outside objects” in a sense closely allied with the notion of spatiality developed in the Transcendental Analytic. Being transcendentally ideal itself, Stapleford makes clear that objects that are spatial are, in a qualified sense, “ideal.” What makes Kant’s argument a refutation of the idealism of his predecessors is its denial that outer perceptions are less immediate, less available or more uncertain than their inner analogue, which in fact presupposes outer perceptions. However, Stapleford admits “in so far as the enduring objects are spatial, and thus in so far as they are appearances, they imply at least the thought that something appears. That is just a principle of critical philosophy.” (80)  The difference between the positions rests on an ambiguity in Kant’s writings between “spatial” and “distinct” objects. While the difference may be overstated, Stapleford argues convincingly against Guyer’s claim that Kant’s stance is that of a metaphysical realist as it is commonly understood, by detailing the extent of Kant’s commitment to the idea that such predicates cannot be ascribed to objects.

In the final chapter of his book, Stapleford draws a comparison between Kant’s critical discourse and Carnap’s idea of a conceptual framework. What Stapleford implies as the most fruitful point of comparison is the manner in which “a critical analysis can disclose its necessary conceptual and intuitive presuppositions without our having to suspend their effects on our experience.” (124)  In other words, with a properly critical approach, one can talk about the framework (its necessary concepts or its limits) without our overstepping our rights by having to refer outside of that discourse. He therefore compares Kant’s goal to set determinate limits to our knowledge with Carnap’s declaration of the “utter bankruptcy of ‘external questions.’” (123)  This chapter argues that, for Kant, a priori concepts are the framework for our experience and apply exclusively to objects of experience and that transcendental arguments are what allow Kant to say this. So, while the Refutation does not refute idealism in a straightforward sense were one to pose the question ontologically, Stapleford’s point is that “to give a straightforward answer to this question is to perhaps miss the point.” (128)  Kant is able to speak like a realist on the empirical level, arguing that it is fundamental to our experience to do so, but, critically, we are in no position to make judgements about the ontological status of those objects—how or what they are outside of how they appear to us.