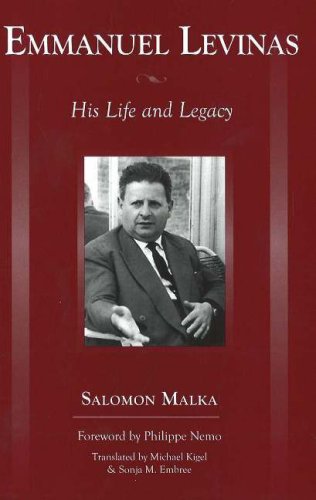 It may surprise a reader familiar with the philosophy of the face to know that Levinas was as famously irascible as he was attentive, nurturing and delicate with people. (90, 93, 94, 237)  The day that the principal of the École Normale Israélite Orientale (ENIO) was seen storming around the school halls after a “soup riot” in the student cafeteria was not an uncharacteristic occurrence, nor, however, was attentiveness to individual interactions out of the ordinary for him.  Regarding the latter, a former student recounts, “He [Levinas] set a high standard for responding to whoever [sic] happened to be the interlocutor.  He responded to a student as he might have responded to Cassirer.” (95)  Focussing his work through the lens of the places Levinas inhabited and the people with whom he interacted, Salomon Malka’s biography of Emmanuel Levinas places Levinas’ philosophy in the context of a life deeply wounded by the Holocaust and engaged in a continual dialogue—from his early days as a student in Strasbourg until his death in 1995—with a veritable honour roll of 20th-century philosophical and religious thinkers.

As the first full-length biography of Levinas available in English, this book fills a hole in the accessible literature.  Malka meticulously traces the whole course of Levinas’ life through reference to both archival research and interviews with the many people with whom Levinas came into contact over the years.  He places particular emphasis on the relationship between Levinas’ Jewish thought and his philosophical thought.  The book is arranged into two sections.  The first, “Places,” tracks the moments of Levinas’ life through the physical centres of his activity during various stages of his life.  The second, “Faces,” proceeds more so than the first section by firsthand accounts of the people with whom Levinas lived and engaged.  All of this is interspersed with short, atmospheric, firsthand account snapshots of Malka’s—himself a former student of Levinas’ at the ENIO—own memories of interactions with Levinas and his wife.

The strength of this biography lies in placing Levinas’ life and philosophy in context: the context of his life as a naturalised French citizen, the context of living as a Jew in Europe before, during and after the Holocaust, the context of the phenomenological movement and the various intellectual circles in which Levinas participated, and finally the context of a dialogue between Judaism and philosophy.  Malka’s research is both extensive and penetrating, and his firsthand accounts of engagements with Levinas demonstrate his perspicacity.  The weakness of the book, however, stems from the very thing that makes it strong.  Malka sometimes, particularly in the first section, gets bogged down in details.  The first couple of chapters are a dry mass of facts about Levinas’ early life and the environment into which he was born.  So much is squeezed into this early part that attention is not always paid to drawing out the essentials of a particular historical event or making explicit the relevance of a comment in a particular testimony.  There are also stretches of the text that read more like working notes than a woven, fluid narrative (e.g., Chapter 5, where one finds a catalogue of testimonials without any real transition between them).  This greatly improves as the book goes on, however, particularly in chapters that deal with a single testimony such as the wonderful interview with Derrida in the chapter on his relationship with Levinas.  The dryness of the early chapters is a small price to pay for the whole of the work.  The picture that Malka paints of Levinas throughout the course of the book is made vivid by the varying and plentiful testimonials that he pulls together, and the connections he draws between the different events in Levinas’ life provide depth to the account of his character.

While a sophisticated reader unfamiliar with Levinas’ writing could no doubt profitably read this biography, it is likely more rewarding for the familiar reader.  Malka assumes acquaintance with Levinas’ work and builds from there.  He very occasionally makes explicit reference to Levinasian philosophical terms and for the most part is concerned with making the picture of the man whole.  In this Malka is extremely successful and it, of course, has direct bearing on our understanding of Levinas’ philosophy.  As Malka notes, when Levinas’ children speak about him, his work and life bleed together as if “these were inextricably mingled and one of them could not be mentioned without the other one being automatically evoked.” (234)  This harmony of movement is characteristic of Levinas.  What becomes clear throughout the book is the necessity of Levinas’ Judaism for his philosophy and of his philosophy for his Judaism.  As Malka writes, this is an “infinite dialogue” in which “the two worlds touch and sustain each other without merging.” (279)

Malka has provided an important resource for understanding Levinas’ thought more fully, but in the process he has also shown the reader a rich tapestry of places and people.  The intellectual and social climate of the places in which Levinas dwelt are vividly evoked, as are the people with whom he interacted.  For anyone interested in the intellectual environment of 20th-century France specifically and Europe more broadly, Malka provides the intimate access offered by Levinas’ life and engagements.  He brings together Heidegger as he was at Davos in 1928 during his debate with Cassirer, the later debate on Heidegger’s involvement with National Socialism (and Levinas’ break with him), the meetings of Le Collège Philosophique organised by Jean Wahl, the Friday evening meetings at Gabriel Marcel’s house, the annual colloquium of Jewish intellectuals in France, the Castelli colloquia, the Castel Gandolfo meetings organised by Pope John Paul II, a portrait of the enigmatic talmudist Mordechai Chouchani, as well as interviews with Derrida and Ricoeur, among others.  This book is a valuable companion to the study of Levinas’ work.