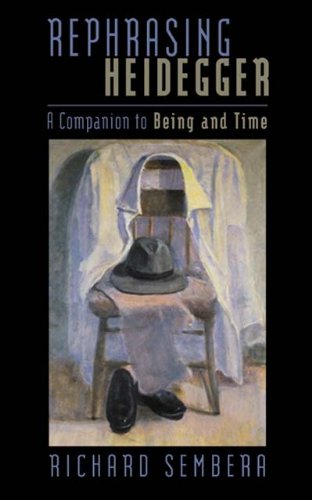 Rephrasing Heidegger: A Companion to Being and Time, by Richard Sembera. Ottawa: University of Ottawa Press, 2007; 309 pages.

Although two English translations of Being and Time have already been produced, perhaps now a third is needed. Sembera’s systematic “rephrasing” of not only Heidegger’s thought but, more basically, his technical vocabulary just might be the kick that gets such a formidable ball rolling.

Most of us are familiar with the most commonly used, 1962 translation of Being and Time by Macquarrie and Robinson, and perhaps less with Stambaugh’s mainly stylistic improvements in 1996. But what most of us do not realise is that, concealed within these translations is an illuminating but flawed interpretation of Being and Time, one which has played no little part in establishing the predominant “existentialist” view of Heidegger common to most of the English-speaking philosophical world. More specifically, these translations have lent themselves to what I would describe as a popular “classroom” reading of Being and Time, according to which das Man or “the they” (third person plural) is an oppressive society against which Dasein exists eigentlich or “authentically” in a quasi-bohemian state; this condition humaine is overcome to the extent that Dasein grasps den Sinn von Sein überhaupt or “the meaning of Being in general,” an “existential”(-ist) grasping that requires Entschloßenheit or “resoluteness” on the part of Dasein toward its own finite Zeitlichkeit or “temporality”; Dasein thereby maximises Seinkönnen or “potentiality of being.” Now, the ultimate blame for such a socio-psychological, that is, non-ontological reading lies squarely on Heidegger’s shoulders, a philosopher who failed pedagogically in his published writings. Nonetheless, the current English translations and their “existentialist” rapport represent an earlier stage of Heidegger scholarship, one which the English-speaking philosophical world is slowly outgrowing. And Rephrasing Heidegger goes a long way in freeing us from this entrenched “Verstellung” of Heideggerian thought, and it does so by uncovering the conceptual underpinnings of Being and Time through clear and unambiguous English for both the beginner and Heidegger specialist.

The author, who studied under von Herrmann (the editor of the most important volumes of Heidegger’s Gesamtausgabe), leads the reader onto this path of disentanglement by phrasing Being and Time anew (hence rephrasing) in three basic ways: retranslation, reordering and reinterpretation.

Firstly, Sembera retranslates Heidegger’s technical vocabulary in Being and Time. A few translations are especially noteworthy: Sinn is rendered as the more referential “sense”; Zeug and Bewandtnis as the more intuitive “tool” and “connection,” respectively; Zuhandenheit and Vorhandenheit as the more literal “to-handedness” and “at-handedness,” respectively; das Man and das Man-selbst as the appropriately neutral “the One” and “the one-self,” respectively; Befindlichkeit as the suitably vague “sensibility”; Seinkönnen as the more active “being-ability”; Gewesenheit, Gegenwart and Zukunft as the more radical “continuance,” “encounter” and “advent,” respectively; Zeitlichkeit as the more Dasein-like “timeliness”; and Geschick as the collective and, to be sure, less mystical “lot.” In addition to a German-English lexicon (Appendix B) cross-referencing Heidegger’s original German terms with his own translations, Macquarrie and Robinson’s, and Stambaugh’s, Sembera includes a glossary of technical terms (Appendix A) with an explanation of their meaning and a discussion of the various translations as well as a justification for his own. (Sembera also includes a third addendum, Appendix C, which summarises in table format all of the important conceptual divisions and structural parallels in Being and Time—a handy tool for any Heidegger scholar.)

Perhaps the only translation in which the author “streamlines” Heidegger’s vocabulary too much is his rendering of Entwurf as “plan.” Although here the problematic psychological connotations of Macquarrie and Robinson’s “projection” and Stambaugh’s “project” are avoided, were this a full translation of Being and Time, some confusion would occur on page 145 of the original, where Heidegger sharply distinguishes “das Entwerfen” from anything like an “ausgedachten Plan.”

Secondly, Sembera reorders the way in which Being and Time is presented. By “reorders” I speak not in terms of sequence but, rather, tidiness. In other words, Sembera brings a systematic orderliness to Being and Time otherwise lacking on first exposure. Most notable in this regard is Sembera’s making good on a criticism he lays against Heidegger and the latter’s perhaps performatively consistent un-ausgedachten style: “one frequently discovers indispensable information, absolutely essential to the understanding of earlier sections, remarked in passing in later sections.” (xvi) Two sections in particular stand out for their house-cleaning: “Understanding versus Perception,” in which Sembera introduces the reader to the ontological lynchpin of Heidegger’s early thought—Dasein’s act of understanding—and does so, in stark contrast to Heidegger’s own presentation, before discussing the question of Being; and “Heidegger’s Concept of Phenomenology (§7)” in which Sembera assembles Heidegger’s dispersed remarks on methodology (from §§7, 18, 32, 44 and 63 of Being and Time) in order to dispel the common mischaracterisation of Heidegger’s phenomenology as purely descriptive. More positively in this latter section, Sembera argues that Being and Time, “being [itself] an interpretation, shares in the circular structure of understanding” (62); “works out the foundation of any possible ontology” (59) including the much neglected Geisteswissenschaften; “envisions [läßt sehen] phenomena” through the apophantic structure of Rede or “talk” (57); and thus that its method, far from being purely descriptive in nature, is in fact a much more radical, hermeneutic phenomenology.

Lastly, Sembera reinterprets Being and Time on the basis of his retranslation and reordering. Cutting through the obscurity and awkward neologisms often associated with Heidegger scholarship in translation, Sembera often pauses “to take stock of the results of our explanations” (43), “to reformulate our conclusions in more precise and more familiar…terms” (18), and perhaps a godsend to any first-time reader of Being and Time: “It is probably worth rephrasing this argument in completely non-philosopher’s terms, since its essential sense can be preserved at a much simpler level.” (153)  Supplementing this reader-friendly style are many examples, a number of which are perhaps prime for becoming pedagogical classics; examples such as solving Zeno’s “Stadium” paradox through phenomenological analysis (14–17), referentially understanding a piece of chalk in a classroom (36–37), Being as observability under laboratory conditions (39–41), restructuring one’s comprehensibility of the world by defining a “zayzax” (96–97), and love as the usually implicit and, to be sure, disagree-able sensibility of a successful marriage. (113)

Structurally, Rephrasing Heidegger consists of an initial chapter on “The Origins of Phenomenology” and two further chapters containing detailed section-by-section analyses of Being and Time. Most important to the beginner is Chapter 2, “Hermeneutic Phenomenology as Fundamental Ontology,” in particular sections 2.5 b), “The One-self,” and 2.9, “The Primeval Structure of Dasein as Concern,” according to which authenticity is “not a question of eliminating the one-self” (82) but a “shift of emphasis” (88) onto Dasein’s selfhood, and thus ultimately “a question of not being caught in the one-self as the only and exclusive way for Dasein to exist” (82); inauthenticity and the one-self, however, are “a necessary foundation of any common enterprise” (124), the deciding factor for which is whether “giving up some of one’s own possibilities of existence…is done from deliberate choice or without explicitly choosing.” (124)

Most important to the Heidegger specialist is Chapter 3, “The Timing of Timeliness,” in particular the initial sections (3.1–3.4), in which Sembera works out in detail the oftentimes blurred because simplified connection between existenzialem Vorlaufen or “existential forerunning” and existenzieller Entschloßenheit or “existentic decidedness,” a connection which, according to Sembera, authorises [bezeugt] Dasein’s eigentliches Ganzseinkönnen or “authentic ability-to-be-a-whole,” and thus initially brings into phenomenal view the zeitlich or “timely” structure of Sorge, “concern.” In Sembera’s own words, “The authentic structure of the conscience must be linked with the authentic structure of being unto death in order to characterise adequately the essential, authentic, and primeval ontological structure of Dasein” (191), that is, forerunning decidedness.

Perhaps the only interpretation in which the author slightly diminishes Heidegger’s (overall) thought is his second “nominal” definition of Being as “that by means of which we understand the difference between existence and non-existence.” (44) My perceived diminution does not lie in the definition itself; rather, in it an opportunity is missed at bridging Heidegger’s later seinsgeschichtlich or “ontohistorical” thinking (to which the author admits he is largely unsympathetic) by pointing out the connection between das Nicht of (Being’s) non-existence (what Heidegger calls “the horizontal schema of absence” in Die Grundpro-bleme der Phänomenologie) and Heidegger’s more radical, ontohistorically geschickt experience of Seinsvergessenheit, “the forgottenness of Being.”

In sum, then, Rephrasing Heidegger systematically retranslates, reorders and reinterprets Being and Time in clear and unambiguous English for both the beginner and Heidegger specialist. In so doing it lays the groundwork for future Heidegger scholarship in the English-speaking philosophical world, perhaps even a new translation of Being and Time. I highly recommend this book to anyone interested in engaging Heidegger as a truly systematic thinker.