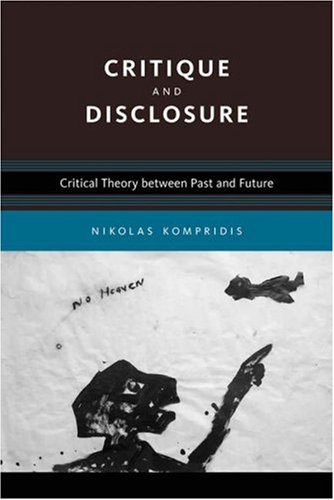 With Critique and Disclosure, Nikolas Kompridis makes an impressive intervention in the self-definition of Critical Theory, an internal discourse dating back to Horkheimer’s seminal “Traditional and Critical Theory.” For some time, dissatisfaction with its overwhelmingly Habermasian direction has been growing, and Kompridis is no exception to this trend. His book is full of intriguing but controversial ideas, such that an adequate, balanced appraisal of the whole is impossible in this short space. I will, therefore, simply comment on those aspects that I took to be most crucial, noting, however, that its shortcomings as much as its strengths lead me to imagine that Critique and Disclosure will become a necessary reading for all those invested in the reinvigoration or, possibly, transformation of this tradition.

Most importantly, Kompridis endeavours to refigure the self-understanding of Critical Theory. He draws on Habermas’ own insistence that Critical Theory is essentially dependent on the peculiarly modern form of time-consciousness in order to argue that the overly narrow, procedural conceptions of rationality and normativity dominating the theory of communicative action fail to respect this deep insight (which he actually traces at least as far back as Hegel). The opening and closing sections—titled, respectively, “What is Critical Theory for…” and “…in Times of Need,” self-consciously echoing Hölderlin and Heidegger—claim that Modernity’s time-consciousness is such that our historical relation to the past is so damaged as to fail to frame adequately our expectations for the future, which thus appears not as the horizon of the possible fulfilment of our hopes and projects but as threatening and deeply disorienting. The result is a sense of powerlessness and dispossession. We seem to lack, according to Kompridis, any stable sense of agency that would allow us to take responsibility for the transmission of various practices from the past to the future; the issue is “knowing how to go on, differently,” insofar as we lack the normative resources to decide upon the “proportion of continuity and discontinuity in the forms of life we pass on.” (11)

Kompridis readily admits that, given Critical Theory’s essential dependence on its historical context, there is no “solution” to this problematic situation; rather, he is interested in Critical Theory with respect to its function—to use a pragmatic turn of phrase—of “coping with the situation.” And it is to the Heideggerian notion of “disclosure” that Kompridis turns as the most promising coping mechanism. This move, though not unprecedented, is nevertheless bold, insofar as the tradition of the Frankfurt School has been marked, from Benjamin to Habermas, by an understandable (if neither entirely justified nor entirely fair) hostility to phenomenology in general and to Heidegger in particular. Kompridis’ second and third sections are devoted, respectively, to defending Heidegger against Habermas’ allegation that fundamental ontology is, in effect, a theoretical propaedeutic to Nazism and to combating Habermas’ various criticisms, primarily in the Philosophical Discourse of Modernity, of so-called “disclosure theorists” (e.g., Heidegger, Foucault, Derrida and Castoriadis). These constitute the most thorough and plausible attempts at rehabilitating and appropriating Heidegger that I know of within the Critical Theoretic tradition, and draw out the internal tensions and alleged internal contradictions within Habermas’ own thought.

The crux of Kompridis’ approach here is to argue that Habermas’ conception of communicative rationality is inadequate to the temporally-indexed “needs” that call Critical Theory—and, as Kompridis ambitiously argues in Part V, philosophy in general—to respond, while “disclosive practices” at least serve as genuine responses. In general, Kompridis takes Habermas’ insistence on a fully “post-metaphysical thinking,” manifest in a conception of reason exhausted in formal argumentation and the universalistic procedures for evaluating such arguments, to betray the Kantian insight that reason is essentially self-determining; what we take to be rational remains open-ended. Habermas’ obsession with evaluating the validity of truth-claims, according to Kompridis, cannot reassure us “moderns” of our agency or provide us with normative guidance in terms of which we can take responsibility for the modification and transmission of our forms of life. Kompridis’ major innovation is to argue that “disclosure” should be incorporated into a richer conception of rationality, specifically the “disclosure of possibility”; Kompridis would like Critical Theory to expand the realm of meaning, that is, to disclose the conditions of intelligibility constituted by various practical engagements so as to reveal how different possibilities of meaning—and thus of self-understanding and, accordingly, of “going on, differently”—are available to us. On this view, a conception of rationality inclusive of the disclosure of the realm of meaning—what Kompridis calls, riffing on Sellars, the “logical space of possibilities”—is more radical than, insofar as it constitutes the possibility of, the restricted “truth-tracking” rationality defended by Habermas.

Indeed, Kompridis invests some considerable theoretical energy into “romanticizing” Critical Theory; the dissatisfaction with Habermas is, at base, dissatisfaction with his “conservatism towards possibility.” The theory of communicative action is taken to unduly restrict the possibility of transforming social and cultural practices. While Habermas has certainly been criticised for a certain sort of conservatism or complacency, this has usually been motivated by a sense that he has “given up” the radical, total critiques offered by Benjamin, Horkheimer, Adorno and Marcuse, and resigned himself to the limited possibilities available for “justice.” Kompridis’ account is certainly unique, at least, in criticising Habermas for not being optimistic enough, for ignoring the initiative of human beings, the capability to “begin anew”; reason-as-disclosure, as Kompridis takes it, is to open a wealth of radically new possibilities.

As mentioned, Kompridis’ case for a fundamental reorientation of Critical Theory ought to provoke much discussion. Though I am no Habermasian, Kompridis’ approach to Habermas and the “disclosure theorists” he opposes is indicative of the shortcomings of the work (shortcomings which I hope will nevertheless stimulate Critical Theorists to address these issues themselves). The fifth part of the book argues for a revitalised conception of philosophy, which, though not bearing any cultural authority itself, is both freed from its subservience to the “reconstructive sciences” and characterised as a response to the crises of its time, a conception allegedly eschewed by Habermas. But a sympathetic critic might acknowledge that Habermas’ conception was shaped—at least in part—not only by the critical aporias of Adorno, Horkheimer and Benjamin, but also in response to the claims of the “disclosure theorists” that Kompridis would like to rehabilitate for Critical Theory. One might think that Habermas’ restrictive concept of reason is a concession to the deep criticisms of “philosophy” as such issuing from Foucault, Derrida and the later Heidegger, concessions necessary for any genuine discourse at all. Acknowledging this, I think, would call one to a deeper engagement with these individual theorists, drawing out a fuller account of disclosure, and more carefully mapping points of divergence from and convergence with Habermas.

In addition, while Kompridis’ Heidegger is deeply Dreyfusian, the interpretations of disclosure both received and critiqued by, for example, Lyotard and Derrida, are marked by important differences, scepticism and approvals. A richer understanding of this history would complicate Kompridis’ conception of philosophy as time-responsive insofar as various thinkers have markedly different conceptions of temporality; if one is to accept a notion of “disclosure,” surely one must accept an accompanying notion of time. Thus, one would have to evaluate, for instance, those of Levinas, Derrida and Ricoeur. Kompridis hopes to draw the normative basis of Critical Theory—an issue dominating its recent history—from modernity’s time-consciousness, but this is only sketchily presented, and one cannot help but think that a fuller notion of temporality would be necessary for his project to succeed.

What I hope this book accomplishes is a revitalisation of the discussion of rationality within the tradition of Critical Theory. To look to Heidegger in this context is a bold move, and potentially reinvigorating. But it also makes more perspicuous a direction that Critical Theory has long ignored, to its detriment: the philosophy of science. Habermas’ Knowledge and Human Interests unfortunately equated philosophy of science with a naïve and pernicious positivism, even though it appeared years after Kuhn’s Structure of Scientific Revolutions, and there has been precious little engagement on the part of Critical Theory since. The eschewal of the philosophy of science becomes glaring, even, given the constant reference to the “paradigm-shift” in Critical Theory between subject-centred and communicative rationality. Kompridis even refers to the sorts of crises to which Critical Theory ought to be responsive as “epistemological crises,” a term lifted from an essay by Alasdair MacIntyre concerning, among other things, Kuhn and the rationality of science. With respect to both the transformation of Critical Theory, and the sorts of ruptures within the “life-world” to which it is to respond, the discussions of scientific rationality in the wake of Kuhn and, importantly, within a relatively autonomous French tradition of philosophy of science, surely hold resources for the critical theorist willing to break with orthodoxy. Hopefully, Kompridis has made this move easier.