Lorenzo Fabbri, The Domestication of Derrida 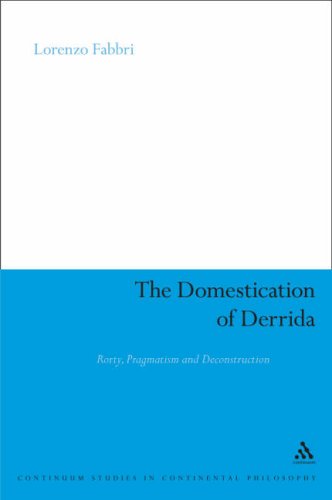 Despite Rorty’s usual flouting of philosophical dichotomies, one of his more positive (and contentious) assertions is the need for a robust distinction between the public and private spheres. Whereas the former deals with the suffering of other people, the latter is concerned with individual projects of self-creation. For Rorty, Habermas is representative of the public realm while Derrida is consigned to the private sphere. It is precisely this consignment that Lorenzo Fabbri challenges and ultimately finds lacking. Fabbri’s approach is twofold. First, he extrapolates what is most persuasive in Rorty’s account, after which he proceeds to demonstrate the ways in which Derrida and deconstruction perpetually stave off domestication. The book concludes that an “infinite distance” remains between Rorty and Derrida. (127)

Chapter 1 begins with the backdrop to Rorty’s reading of Derrida, specifically Rorty’s multifaceted answer to the question, “What is philosophy?” For Rorty, there are two conceptions of modern philosophy. The first one—Kant’s—began once science and philosophy had secured victory over the entrenched religious institutions. It retained the scientific method and specified itself in terms of epistemology for which the scheme/content distinction was central. This transcendental project permitted three responses—realism, relativism and ironism. The former two reside within the Kantian transcendental framework in the sense that they both accept the scheme/content distinction. The ironist, by contrast, rejects it. It is this ironist move that constitutes the second conception of philosophy. It is thoroughly reactive to, or parasitic on, the Kantian conception and occupies itself with demonstrating the contingency of philosophical discourses. In this way, the category of the ironist is akin to that of the poet. Indeed, for Rorty, what is exemplary about the poet is her desire for autonomy; this is articulated in Ezra Pound’s exhortation for the poet to “Make it new.” There is also an element of anxiety present, namely, the poets’ fear that they may be unable to shake off adequately the constraints of their time and place. This contrasts with Plato’s belief that creativity emerges not out of fear, but out of astonishment.

Chapter 2 shifts to the weaknesses of Rorty’s Derrida, which are baldly stated in Fabbri’s claim that Rorty relegates Derrida to an unsustainable “double privacy.” He writes, “Deconstruction is private because it breaks free from every metaphysical and transcendental demand, privatizing itself in a self-referential fantasizing, but it is also private because it deprives itself of any political pretension.” (50) For Fabbri, both alleged privatisations are fundamentally unsound. Consider Envois. According to Rorty, this text—full of playful double entendres, puns and etymologies—best exemplifies Derrida’s avoidance of the transcendental project. By running philosophy together with autobiography, Rorty thinks that Derrida has succeeded in historicising himself.

Fabbri challenges this reading on two fronts. First, he points out that Rorty’s emphasis on the ironic facet of Derrida fails to appreciate his more serious side. Indeed, most American Derrideans—Norris and Culler, for instance—have criticised Rorty on this score. Rorty’s strategy has been to downplay Derrida’s quasi-transcendental comments as mere extravagances needing no heavy intellectual engagement. But Fabbri argues that one cannot divide the playful from the serious in Derrida. Second, Fabbri critiques Rorty’s reading of Envois and demonstrates that no easy autobiographical interpretation is viable. For instance, there is textual evidence that suggests Envois is not even about Derrida. Therefore, it is not autobiography. Second, following de Man, the autobiography is a distinct genre and so texts purporting to be autobiographical must satisfy that genre’s precepts. Contra Rorty, then, there is no easy reduction of philosophy to autobiography in Derrida. But is this a fair characterisation? Fabbri’s criticism hinges on distinguishing, with regard to philosophy, between Rortyan reductionism and Derridean contamination. This alleged reductionism presupposes the meta-philosophical claim that philosophy is contingent and consequently avoidable. This is in clear contrast to Derrida in that both his playful and serious works “testify to the incapacity of getting philosophy out of one’s mind, of breaking up with metaphysics and theory.” (74) It also reveals the full force of Rorty’s insistence that he is solely focussed on Derrida “at his best.” Derrida does not think one can ever circumvent philosophy; as Fabbri remarks, all of the attempts to accomplish this have so far failed. Rorty, to be fair, offers no guarantees, but insists that a heavy dose of Deweyan experimentalism is sufficient to justify the attempt.

The final chapter of the book discusses the political relevance of deconstruction. Fabbri traces the line of Rorty’s thought, from his early privatisation of philosophy as evidenced in Contingency, Irony, and Solidarity to his later thoughts about the role of theory. One of Rorty’s notable habits is to assert extremely controversial claims only to carefully refine them thereafter. Such is the case with the public/private distinction. In later articles, Rorty assuages its rigidity and comes to appreciate that deconstruction does, and can, have a political dimension. According to Fabbri, Rorty’s actual target, once appropriately refined, is the banal claim that theory does not necessarily lead to social action. As he tells us in his “Hilary Putnam and the Relativist Menace,” Rorty himself has “complained over and over again about Heidegger’s and Derrida’s overestimation of the cultural importance of philosophy.” (Truth and Progress, 45) This is a site of deep division between Rorty and Derrida.

In drawing out the disagreement, Fabbri utilises Kant, Foucault and Derrida with reference to the concept of the university. Since Kant’s time, the model of the university has been predicated on a division between the higher and the lower faculties. Both the public/private and the performative/constative distinction can be inserted here. The task of the higher faculties—law, medicine, theology—was to serve the state, or more strongly stated, to engage in what Foucault conceptualised as governmentalisation. Kant, in want of preserving philosophy’s independence, consigned it to the purely constative realm. Whereas Kant differentiates the public and private realms transcendentally, Rorty is content to reach the same differentiation via empirical evidence. Philosophy simply does not have much effect on society; furthermore, this should not be considered inherently regrettable. By contrast, and even though he problematises the performative/constative distinction, Derrida “professes the urgency to re-launch the legacy of a certain Kantian attitude and to safeguard the university as the ultimate place of critical resistance against hegemonic powers.” (107) This critical resistance is akin to Foucault’s concept of critique and results in an anarchic streak running through deconstruction.

The book confronts the full scope of Rorty’s position. It is best in the final chapter because it is only there that Rorty’s modifications of the public/private distinction are introduced. One wonders why they took so long to emerge. Moreover, Fabbri does not seem to appreciate fully that Rorty’s meta-philosophical critique and his bourgeois liberalism are logically distinct. In other words, one can accept the argument that the transcendental project ought to be left behind and still think that deconstruction offers a potentially effective means of critiquing society. The question of its political effectiveness is, for Rorty, a pragmatic one and it is not clear to me that Fabbri, or Derrida, have made a convincing case for deconstruction beyond it being merely potentially relevant. Nevertheless, the book provokes long reflection on the basic fruitfulness of Rorty’s position, and this alone is a clear virtue.