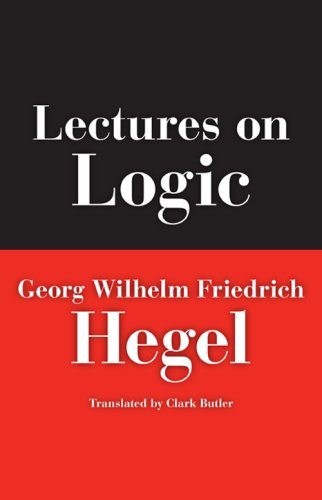 Every translation involves making strategic choices, and it is all too easy for those who come along afterwards to second-guess these decisions. This danger is all the more obvious in the present case, for one of Butler’s major aims in releasing this volume was that “for some it may, for the first time, make the science of logic not only readable but teachable.” (ix) Many of Butler’s translation decisions are guided by the aim of producing a text that could serve to introduce Hegel’s logic to a broader non-specialist audience. It is thus tempting to complain that Butler’s translation falls short of the high standards set by the recent spate of Oxford translations of Hegel’s lectures and fail to recognise the virtues of this text. This translation is certainly to be recommended on the grounds that it will be of value and interest not only to specialists but to any who would seek a point of entrance into Hegel’s often overwhelming logic. Nonetheless, this recommendation is not unconditional, for Butler’s translation is far from unobjectionable. After offering a brief overview of the text, I shall thus play the part of the critic—or rather the valet.

Hegel always insisted that his Encyclopaedia was meant merely to serve as a compendium to his lectures, and that it would only receive its proper explication and development there. It is for this reason that Hegel’s initial literary executors supplemented this text with the so-called Zusätze, material gathered from students’ lecture notes. Unfortunately, the willingness of editors to conflate the texts of various transcripts taken from different years of presentation has meant that the Zusätze were a necessary evil, for they often formed the only source for the elaboration of passages in Hegel’s Encyclopaedia that would otherwise have been impenetrable. It is for this reason that the recent release and translation of student manuscripts of Hegel’s lectures is so much to be welcomed. Granted, in the case of logic, readers were not so dependent on the Zusätze as with the other branches of Hegel’s system, for it was possible to consult Hegel’s own elaboration of this part of his system, namely, the Science of Logic, released in 1812 and partially revised for release in the second edition of 1831. Nonetheless, the Encyclopaedia version of logic is still important for two reasons. First, the Science of Logic is a long and often extremely difficult text, such that a supplementary briefer account that presents much the same argument in different words would still be highly valuable. Second, in the Encyclopaedia version of his logic, and even from the first edition of the Encyclopaedia in 1817 to the last in 1830, Hegel introduces some fairly major changes, particularly in the second division of the logic, namely, Essence. Since Hegel’s second edition of the Science of Logic was incomplete, only extending to the first division of Being, it should be fairly clear why a manuscript of Hegel’s final lecture on Logic, transcribed by Hegel’s own son Karl, would be such a valuable document.

Hegel’s presentation quite clearly follows the Encyclopaedia Logic (§§19–244 of the Third Edition) with only minor deviations. A comparison of the two texts is aided by the translator’s decision to identify the parallel sections of the Encyclopaedia when these were not identified in the original manuscript. Although such a parallel reading is useful, it may also quite fruitfully be read in isolation, for the lectures form a continuous and self-contained presentation of Hegel’s logic. It is for this reason that Butler’s translation of these lectures may usefully serve not only as supplementary text of interest to scholars, but also as a stand-alone introduction to Hegel’s logic. Given that these lectures follow the Encyclopaedia, scholars will undoubtedly find much that sounds familiar here but also subtle changes of emphasis that, due to the looser style of Hegel’s lectures, are frequently quite illuminating. The beginner, however, will find the text far more accessible than the Encyclopaedia and often far more illuminating than the Zusätze.

In order to render the manuscript readable, both the German editors and Butler himself had to insert a number of interpolations. The interpolations in the German text, however, are fairly minimal, mainly consisting in supplying missing articles and filling in fairly obvious lacuna where the manuscript resorts to shorthand. In producing his English translation, Butler has been far more liberal in his use of interpolations, attempting thereby to fill in those ambiguities and lacunae in Karl Hegel’s manuscript that, although unproblematic for those already immersed in Hegel’s works, would render these same passages inaccessible, or at least less clear, to non-specialists. In themselves, neither set of interpolations are particularly objectionable, and while Butler’s approach is perhaps less to the taste of scholars, his interpolations should, for the most part, be uncontroversial, as they are easily confirmed by looking at parallel passages in either the Encyclopaedia or the Science of Logic. Moreover, such interpolations can easily be ignored when they are set off in brackets. And, yet, this is precisely where Butler’s translation begins to falter, for not only does he fail to indicate the interpolations of the German editors, but by his own admission, he occasionally adds, without indicating that these are interpolations, “a few extra words [to] help the reader keep in mind what Hegel has referred to and is still referring to in the text.” (ix)

The decision to inconsistently indicate interpolations is irritating, but the decision to include neither an index nor a translation glossary of translation terms is downright frustrating. The absence of a glossary is particularly troubling, given that the translation choices which Butler mentions and defends in his introduction are so idiosyncratic and questionable. Presumably in an effort to make the present text more accessible, Butler renders der Begriff as “the self-concept” so as “to make more explicit Hegel’s thought that the concept grasps itself in its object.” (xviii) Although I take his point, this neologism is rather heavy-handed, likely to be irksome for those familiar with Hegel’s philosophy and unnecessarily confusing for any beginner who would seek to go from the present text to any of the other standard translations of Hegel’s works. Although Hegel certainly does give the term Begriff an unusual technical sense, this sense is hardly conveyed in such a simplistic manner, since it arguably takes no less than two-thirds of the Logic to arrive at an appropriate definition of the term. Moreover, if Butler’s claims that der Begriff is elliptical and that his translation is true to the author’s intentions were correct, then Hegel’s objections to how Kant, for example, uses this term, would be quite senseless.

Even more bothersome is Butler’s decision to translate the an in an sich as “upon,” thereby replacing the standard translation “in-itself” with the awkward and misleading “upon itself.” Despite Butler’s rather peculiar argument to the contrary, “upon” does not capture Hegel’s sense of immediacy, but entails a sense of distance and mediation that is inappropriate, misleading and results in such peculiar and awkward translations as the following: “What is merely upon itself is still bottled up inside itself.” (76)  Surely, if the aim is to make Hegel’s philosophical system intelligible to the average reader, then such peculiar renderings should be avoided. One can no more sit upon their own lap than lift themselves up by their own hair, à la Baron Munchausen.

Finally, Butler decides to modify consistently Hegel’s terminology by rendering such universal terms like Bestimmtheit and Existenz as “determination” and “the existent.” Butler’s justification for this proceeds from his claim that Hegel had admitted in his review of Göschel’s Aphorisms that his style gave readers the mistaken impression that he was a panlogist, while to the contrary, according to Butler, these lectures “give us good reason for supposing that Hegel, far from being a panlogist, was in fact a nominalist.” (xvii) According to Butler, then, his alteration of the text is simply the correction of “a mode of expression which [Hegel] himself criticized in 1830, but which still remained an ingrained habit of his in the 1831 lectures.” (xviii)

In brief, then, while this is a valuable addition to the English translations of Hegel’s works and should be of interest to anyone who wishes to gain or deepen their understanding of Hegel’s logic, it is a quirky translation that is less than neutral and thus must be read with some caution.