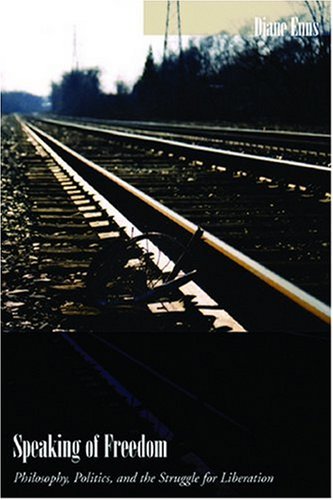 In this book, Diane Enns reworks what we can mean when we invoke the idea of freedom. As someone who is wary of speaking about freedom, I am relieved as much by Enns’ articulation of the problems of freedom-talk as by her suggestions for rethinking what freedom can mean.  One of the most promising aspects of Enns’ analysis is her resolute placement of freedom at the juncture between idea and necessity―that is, precisely where it is most problematic for philosophy and, as she shows, for politics.  Enns’ approach allows her to offer an account of how one might, philosophically, speak of, and not simply about, freedom.

Approached from the direction of philosophy, the realisation of freedom in the world requires that indeterminate ideas of freedom be translated into actions.  But in the moment of action, set in the context of worldly political circumstances, freedom limits itself, or worse, putrefies and corrupts itself. (10)  We frustrate our best intentions of acting politically to actualise the idea of freedom. This is a problem for philosophers (and, Enns shows, for any thinker) who insist that philosophy be in and of the world, since there is, everywhere one looks, an “unshakable desire” for freedom (2) though its actualisation is not assured. Such frustration is exemplified by many liberation discourses (a number of which Enns considers in admirable detail), which show a tendency to re-inscribe boundaries of exclusion, even as they seek to end domination. Approached from the direction of the political, supporters of determinate freedoms face philosophical thinking about freedom with anxiety, since it reveals the impossibility of living up to even limited ideals (which become corrupted in action). This anxiety reveals the absolute lack of certainty about the rightness, goodness and justness of one’s cause. The very desire for freedom, Enns demonstrates, is at stake in political considerations of philosophical freedom.

Instead of turning to a “politics of regulative principles,” Enns builds an account of the political as that realm of “inexhaustible encounters” of worldly beings and “unpredictable solutions” needed for their negotiation, an account that is at every moment tied to particular political struggles for freedom. (15) She deals with a history of what she calls “blueprints” (15), all (at least) partially inspired by Marx’s faith in a future free from oppression, beginning with French existentialist views of freedom.

This first blueprint is sketched with attention to humanistic assumptions—an ethic of sovereign subjectivity, and often the necessity of and full capacity for choice (Beauvoir’s and Merleau-Ponty’s concerns for la force des choses notwithstanding). But existentialist freedoms in practice exemplify the problem of freedom, not simply as a problematic idea, but as a problematic necessity. Without romanticisation or dismissal, Enns then reads the social movements of the 1960s and 1970s influenced by existentialist philosophy as developing the political values of self-determination, the right to autonomy and the force of identity claims. Her impressive grasp of the writings from movements of Northern African decolonisation (through Fanon and Memmi), “second wave” feminism (Millett) and black consciousness in South Africa (Biko) allows her to illustrate common themes across diverse histories and forms of oppression.  Chief among these themes is an imagined place of free and (newly) sovereign subjects, accompanied by an insistence on faith in their coming freedom.  But the internal practices of these particular liberation discourses often appear insensible to the relationship of freedom and power, judging internal self-critique to be threatening or traitorous; they variously posit freedom as outside of power relations.

Enns finds that it is not only in political movements that a disjuncture between the idea of freedom and the promise of lived freedoms occurs.  Joining the problems of identity politics inherent in existentialist social movements with Foucault’s critical response to the humanist subject of existentialism, she articulates Foucault’s blueprint of subjection of self through practices of identification as a way of finding freedom within omnipresent webs of power.  But her intriguing suggestion is that there is a profound discord in Foucault’s work between the powers involved in the discipline of subjects and the powers people struggle against when they live in colonies or under overtly repressive regimes.  Foucaultian freedom is incongruent with his own experiences as a direct witness of the desire for freedoms (in Tunisia and Iran).

The final two chapters constitute, in my view, the most successful of the book.  The fourth engages a response to Foucault’s thinking about power:  Derrida’s “messianism without messianism” (121) describes a blueprint for freedom based on faith in the à-venir, the to-come.  Dwelling on the moment of faith in political fights for freedom she considered in earlier chapters, Enns argues that faith in what is to come, faith “irreducible to knowledge,” structures the seemingly irrepressible desire for freedom in the face of philosophical objections. (121)  But it is also a freedom without innocence.  The messiah, in this case freedom from oppression, is always possible, and always entwined in the risks of power.  Enns draws on Derrida’s articulation of the interregnum between will and action to describe a moment of “ungraspable” freedom, which always risks evil, domination, injustice in order to do or establish justice in the world and for others. (119) This moment, everywhere a part of human activity, provides the à-venir, the “opening of a gap between an infinite promise and the determined, necessary, but also inadequate forms of what has to be measured against this promise” (122)―the juncture of political and philosophical considerations about freedom, re-envisioned as a space of hope for a better future and faith in its to-come.

Enns successfully attempts to think freedom otherwise, not only philosophically and politically, but both at once―this book is a theoretical practice.  She thus asks in the fifth chapter whether there are any examples of messianism without a messiah in the work or dreams of struggling people.  This chapter also contains an interesting history of Latin American liberation philosophy, again showing the breadth of Enns’ knowledge.  Comparing the Zapatista movement based in Chiapas, Mexico, to the revolutionary movement of liberation philosophy, Enns finds an example of such a working dream.  The Zapatista spokesperson, Subcomandante Marcos, calls their revolution a preguntando caminamos―“a revolution that walks asking” (134) or perhaps (as I might have it), we walk, together, asking.

Instead of invoking a dominant (and essentialising) discourse about subjectivity and identity, Enns’ reading of the Zapatista movement is one of story-telling and continuous re-telling―history is told with the future, justice and “dignity” in mind, giving preference to multiplicity over identity.  Importantly, she also takes her example to illustrate the inherent slipperiness of even a Derridean view of freedom, since each time the movement acts/moves to exemplify its dream, it singularises itself, re-inscribing the singularity it rejects―showing itself that its ideas of freedom cannot be so free in action.  Through Marcos, Enns paints a picture of the world for Zapatistas as uncompleted and unfinished, their revolution as “ambiguous” and “paradoxical,” and of its members asking one another as they walk. (142–43)  She describes the movement of multiply entwined instances stepping forward, a movement acknowledged simultaneously as risky and inescapable for those who take freedom seriously.

By speaking of freedom as the desire for an incomplete justice (to-come), we show ourselves the necessity of acknowledging the inherent non-innocence of our intellectual and practical engagements with others in the world.  Enns reminds us that the tasks of responding to oppression by “urgent action and slow deliberation,” the Derridean “double injunction of lingering and rushing” (127), cannot escape the re-inscription of unfreedom.

Framing freedom in this way, Enns retrieves the language of freedom away from the self-defeating “sovereign, solipsistic subject.” (155) The desire for freedom, she argues, must be a desire for that which we know is ungraspable, a desire without innocence of thought or action.  But it is, perhaps, in this recognition that we can also help ourselves prevent “cycles of resistance and disillusionment” in liberation movements (155), keeping faith in desires for freedom.