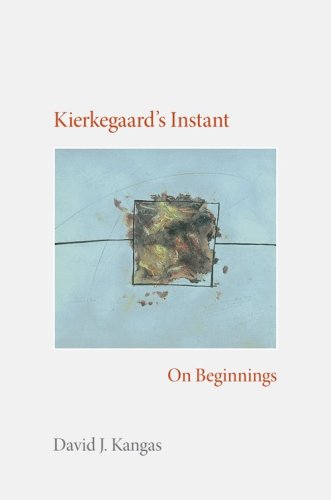 This important book directly interrogates the relationship between time and subjectivity in Kierkegaard’s early works. Kangas also provides a fresh interpretation of Idealism, using Kierkegaard’s conception of “the instant” in order to show that Kierkegaard’s critique of Idealism actually takes the form of an appropriation. According to Kangas, Kierkegaard in effect reads Idealism backwards by focussing attention on the continual beginning that the instant is. The instant is the “beginning presupposed in any beginning.” (183) As such, it is what gives birth to both past and present.

Kierkegaard’s Instant primarily treats the individual’s existential condition as a relationship to time. Kangas argues that, for Kierkegaard, the individual has an anarchic relationship to time, since her beginning always precedes her. Whereas Greek and Hegelian thought obscures this truth, Kierkegaard exposes it. According to Kangas, the instant “is the pre-eminently real event through which self-consciousness is opened up, or first of all born, again and again.” (5) The book focusses on how in Kierkegaard’s early works the instant is understood as a continual beginning that never becomes present. Kangas examines the instant as paradigmatic for time, asserting that for Kierkegaard time is groundless. The instant is the point of contact between the temporal and the eternal, yet each instant is the source of itself. This means that the subject must, in each instant, relate herself to groundlessness. Kangas additionally argues that Kierkegaard is indebted to Meister Eckhart for his thinking of time in terms of groundlessness. Without producing copious evidence to support the claim that Kierkegaard was directly familiar with Eckhart, Kangas nevertheless makes a convincing case.

The six chapters of the book each provide us with a nuanced and sophisticated reading of one of Kierkegaard’s early philosophical works: The Concept of Irony, Either/Or Book I, Johannes Climacus, Repetition, Fear and Trembling, and The Concept of Anxiety.

According to Kangas, Kierkegaard’s account of subjectivity leaves us with the imperative Gelassenheit, an Eckhartian concept which Kangas translates as “releasement.” Gelassenheit requires that we be capable of paradox, that we acknowledge the groundlessness of our situatedness in time, and recognise that our own self-consciousness is both dependent upon, and undone by, the disjuncture of the instant. Existence requires that we hold ourselves open to the instant (that is, the temporalisation which dispossesses us from ourselves). In his treatment of Fear and Trembling, for example, Kangas argues that the description of Abraham is an instance of essential concealment. Relative to the “stages” described in that pseudonymous text, Abraham remains singular, interrupting all categories of description. Abraham thus represents the paradox of existence because his situation can only ever be pointed at indirectly; his existence precedes and conditions each stage but without ever being determined by any of them.

Kangas counters the teleological account of Kierkegaard’s stages of existence, claiming that, because of the primacy of the instant, each stage is merely an aspect of existence. Existence is the very realisation by the self-conscious subject that she is not the origin of her own subjectivity, and that the origin she seeks only ever comes about in the instant. This encounter with groundlessness occurs in each instant as the subject must continually confront her own beginning. Any teleological ordering of the stages of existence would require a continuous temporality in which self-consciousness comes to know itself. This cannot be the case for Kierkegaard, since each aspect of existence must be understood in relation to groundlessness. Insofar as Kierkegaard prioritises the religious over the other so-called stages of existence, it is not because the subject realises her telos therein. Rather, the religious involves letting go of the demand for a ground and holding oneself open to the infinite beginning that the instant is.

In this book, Kangas provides much needed scholarship on the Eckhartian threads in Kierkegaard’s corpus; he also deftly traces the problematic of the instant that continually gives birth to its own beginning. This is a carefully written, insightful work that will be useful to all readers of Kierkegaard, as well as those interested in thoughtful commentary on the Idealist tradition and in existential analyses of time and subjectivity.