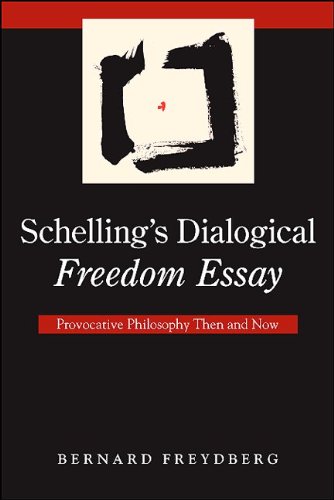 The latest instalment in the ongoing Schelling renaissance in Continental philosophy, Bernard Freydberg’s Schelling’s Dialogical Freedom Essay, provides a fresh reading of Schelling’s notoriously difficult masterpiece. What sets this book apart is how the author reveals Schelling’s text to be an engagement with the history of philosophy, especially Plato and Kant. Freydberg begins by identifying three paths the book will follow. The first and third both treat the relation between Schelling and contemporary Continental philosophy, but are only discussed in the introduction and the conclusion. The second path makes up the substance of the book; it is the path along which Freydberg pursues his reading of Schelling’s Freedom Essay as “a series of provocations that drive the investigation to higher and deeper regions.” (90)

The book’s subtitle, “Provocative Philosophy Then and Now,” provides the reader with a clue about two of Freydberg’s major theses. First, Schelling’s thought was and remains “provocative.” This is not because it provokes new perspectives, but because it is “untimely.” Indeed, Schelling’s concerns are somewhat anachronistic today, but readers of German Idealism and Romanticism may wonder how Schelling could be considered untimely. As an example of this, Freydberg points out that while “Schelling never abandons rule order and form as world characteristics…he is attuned as well to the dark subsoil beneath the surfaces upon which we tread.” (111) But these themes mark Schelling’s dual commitment to Idealism and Romanticism, two currents that shaped the thinking of so many in Schelling’s time, and with which Schelling’s philosophy grapples. The second thesis is more viable. By calling Schelling’s thinking “provocative,” Freydberg points to the “dialogical” structure of the Freedom Essay. (5) The essay is modelled after the “inner dialogue of the thinker” as he moves through contradictions to ever-higher levels. (3) The strength of this notion of provocation is that by pushing readers to look for moments of provocation in the text, it provides a map for Schelling’s discussion and encourages a careful study of the text.

The first chapter orients the reader to the basic problematic of the contradiction of freedom and system, a provocation that “calls forth philosophy” by calling forth the philosopher to provide it with a coherent logos. (14–15) Working through this contradiction demands not that we take sides, slinging polemics at our opponents, but that we recognise the living force of the contradiction in our own lives. The second chapter traces Schelling’s novel interpretation of pantheism. Here again, Freydberg seems to want to call Schelling an untimely thinker, asking why he focusses on pantheism when the idea had lost its prominence after the pantheism controversy of the 1780s. Again, readers familiar with post-Kantian Idealism will be confused. As a result of the controversy, pantheism had become a hot topic, and Schelling was not the only one to have been enchanted. Still, Freydberg offers an intriguing reading of Schelling’s interpretation of pantheism. The issue in this chapter is Schelling’s analysis of the law of identity, or how his careful attention to “the fundamentally creative character of even the most prosaic material connection” (26) imbues the lifeless logos of pantheism with eros. On Freydberg’s reading, what Schelling has added to pantheism is the notion of a creative act. This interpretation places the law of identity and the law of sufficient reason on an equally primordial plane: God is the analytic compound of God and God’s attributes, and God is the sufficient reason for God’s attributes. It is this move that allows Schelling to rethink radically human freedom, the topic of the next two chapters.

In Chapters 3 and 4, Freydberg couches Schelling’s discussion of evil and freedom in terms of the possibility/actuality distinction. Chapter 3 deals with the possibility of freedom and evil, whereas Chapter 4 deals with their actuality. Perhaps the strongest in the book, these chapters make sense of Schelling’s discussion of the life of God as an attempt to ground the possibility and actuality of human freedom. Freydberg traces Schelling’s provocation to think of God as a living unity of ground and existence. Again, Freydberg sees Schelling’s emphasis on creativity playing a central role. God cannot be a simple identification of ground and existence; God must be a creative unfolding in time. To explain this, Freydberg insightfully draws on Kant and Platonic myth. Freydberg argues that the ground/existence distinction can be traced back to Kant, who assumes their separation. Freydberg interprets Schelling as working within this Kantian framework, but arguing ultimately that the separation of ground and existence already assumes a prior unity, something that only mythical speech is capable of articulating. What makes human freedom possible is the act of creation, whereby ground and existence are separated. In creation, God places God’s existence in human hands, and this is what makes freedom possible. Humanity becomes “the site of God’s self-revelation.” (67–68) Freedom becomes actualised when humanity participates in the creative unfolding of God’s life in time, when the possibility of freedom is acted upon.

Drawing on his earlier discussion of the law of identity and the principle of sufficient reason, in Chapter 5 Freydberg nicely explains Schelling’s terribly confusing claims about the unity of freedom and necessity. The human being is determined by an atemporal free choice that is always playing out in time. Such a choice, Freydberg rightly stresses, is not predestination, but it does determine human action according to the principle of sufficient reason. Freedom and necessity are identical because human action always proceeds necessarily according to an atemporal free act that is perpetually playing itself out in every finite human act.

Chapter 6 discusses Schelling’s famous account of evil as false logos. The strength of this chapter consists in the way in which Freydberg shows that while Schelling is concerned to provide a definition of evil that does not efface its terrible reality, his ultimate goal is to understand how humanity can come to choose good over evil. The Kantian notion of duty cannot properly account for such a choice because it cannot account for the moral agent as an agent in the revelation of God. According to Freydberg, the problem for the Schellingian moral agent is not how to motivate the right choices, but how to cultivate an instinct for goodness.

The last two chapters provide a fresh reading of the final sections of Schelling’s essay. While these sections have often been considered unnecessary appendices, Freydberg interprets them as further provocations that only deepen Schelling’s investigations. On Freydberg’s reading, when Schelling says that God too is a life, that God too is a personality, this is a provocation to think of God’s freedom to create the world not as absolute, but as “thoroughly unaccountable and unprovoked,” thus pointing to “the irreducible unaccountability of life.” (89–90) The strength of Freydberg’s analysis consists in that it shows Schelling’s text to be concerned not only with human freedom and moral psychology, but also with the ontological conditions that make human freedom possible. The system of the world is finally unaccountable, ungrounded in any purpose.

A disappointing feature of an otherwise thoughtful book is Freydberg’s concluding remarks on Schelling studies. Freydberg claims that philosophy on both sides of the Atlantic has found itself “eviscerated,” and that a “return to Schelling…provides a source of rejuvenation.” (113) Freydberg never really explains this, but he seems to want to reserve Schelling’s mysterious power for the Continental camp, suggesting that the appreciation of Schelling requires subtle textual exegesis, for which he thinks the analytic tradition is not equipped. Supposedly, the return to Schelling on the Continental side is a “recognition” of “a certain disorientation,” a sign of the health of the movement as a whole. (113) At least in the scholarship on German Idealism, this divide has become less meaningful in the past few decades, and Freydberg’s dismissal of Anglo-American philosophy only serves to invigorate the divisions that many of us working in German Idealism thought were evaporating.

In sum, my reservations about Schelling’s Dialogical Freedom Essay mostly concern the lack of attention to the issues shaping Schelling’s own time. This is not a substantive or immanent criticism, but I wonder whether it has implications for how we understand Schelling’s significance today. In so far as Schelling’s attempt to think the possibility of system together with freedom is a response to debates about the limits of reason that had been raging in Germany since the 1750s, Schelling is perhaps not best understood as an untimely tonic for the rejuvenation of an “eviscerated” spirit, but as an indication of the conciliatory power of philosophy to bring together heterogeneous ideas and think them together in systematic concert.