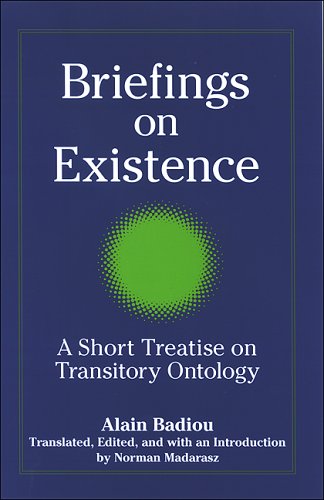 Briefings on Existence: A Short Treatise on Transitory Ontology, by Alain Badiou. Translated, Edited and with an Introduction by Norman Madarasz. Albany: SUNY Press, 2006; 181 pages.

Review by Brent Vizeau, University of Alberta. Published in Symposium 13:2 (2009).

With the passing of the massively influential French philosopher Gilles Deleuze, Alain Badiou has risen to the rank of “current master figure” of French philosophy, or so said his friend and colleague Slavoj Žižek at the recent conference “On the Idea of Communism” (Birkbeck College, London, UK, March 13–15, 2009). None of his peers seemed to disagree. Badiou’s contentious reworkings of classical concepts, such as Truth, Subject and Event, along with his brazen polemics, have set the course of his increasing popularity on a trajectory reminiscent of the French titans of the recent past.

Although Badiou’s earlier work, L’Être et l’événement (1988), published as Being and Event in 2005, may have changed the landscape of contemporary Continental philosophy, it was not received without challenge. For example, in the edited collection of critical essays Think Again: Alain Badiou and the Future of Philosophy (2004), Peter Hallward, perhaps the brightest star among young Badiou scholars, questions Badiou on several points relative to the abstract non-relationality of his ontology.  Hallward argues that, in Being and Event, Badiou is able to give an account of what is, pure multiplicity, but not an account of the properties of multiples counted-as-one, or of how the count-as-one relates to other “ones” or even how it is situated within a context.

Briefings on Existence is representative of Badiou’s “middle period,” as we are told (xi), that is, the period between his two major tomes Being and Event and Logics of Worlds (2009.) As such, readers will frequently find questions in place of the bold answers characteristic of Badiou’s earlier work. These questions allow readers to see the germination of new seeds in Badiou’s thought. The fruit, his major statement in response to earlier challenges such as those presented by Hallward, is presented in its mature form in his second opus, Logics of Worlds.  In this text, Badiou lays out his phenomenology, which accompanies the ontology of Being and Event, marking out the domain proper to logic, or logics (of worlds).

Along with Badiou’s preliminary discussions of Logic—“Category” and “topos” theory—to which I will return, we find in Briefings significant reflections on, and dialogue with, major figures from the history of philosophy: Plato, Aristotle, Spinoza, Kant and, of course, Deleuze. Interestingly, the prologue is titled “God is Dead,” which was the title chosen for the German translation of the book. Both the German and the English titles are far from the original French. Madarasz did keep an English rendering of the original French (Court traité d’ontologie transitoire) as his subtitle, “A Short Treatise on Transitory Ontology”; the main title, “Briefings on Existence,” was chosen because he thought it would “ring better in a consumer market.” (5) This is strange given that Badiou himself tells us in his introduction to the English edition that his book Ethics: An Essay on Evil (2001) was a best-seller that made its way around the world (xi), and that at the time of Briefings he had been “leaping from best-seller to best-seller!” (x) To be fair, the full extent of Badiou’s influence in the English-speaking world had not been felt at the time of this translation’s publication, although by 2006 Badiou was well on his way to his now burgeoning popularity.

This curiosity aside, and although Briefings has its share of minor editing blemishes, as does Madarasz’ translation of Badiou’s Manifesto for Philosophy (1999) from the same series, it is generally a fair presentation of Badiou’s work at this time. While there are some editing and/or translation issues, readers are fortunate that many of the chapters of Briefings (six of fourteen, to be exact) have been published in Theoretical Writings (2004), where they are translated by Ray Brassier and Alberto Toscano, allowing for a comparison of the translations. Still, it seems to me that Madarasz’ translation will be found adequate by all but the most fastidious of readers.

As the bridge between Badiou’s ontological thinking in Being and Event and his recent phenomenological thinking in Logics of Worlds, this text is significant for more than Badiou’s expert historical reflections. Those who have read nearly any of Badiou’s works prior to Briefings, especially Being and Event, as well as the many summaries of his ontology to be found in the introductions to most of the English translations of his books, will be familiar with Badiou’s claim that all that can be said of Being qua Being can be said in terms of mathematics. In other words, mathematics is ontology, and Set Theory as the grounding of mathematics is the centrepiece and basis for Badiou’s ontology. In his essay, “Some Remarks on the Intrinsic Ontology of Alain Badiou,” (Think Again: Alain Badiou and the Future of Philosophy), early critic Jean-Toussaint Desanti called for Badiou to account for his philosophy in a way that is consistent with advances in contemporary mathematics, especially with respect to the challenge that category theory poses to the primacy of Set Theory. It is to this challenge that what is really novel in the pages of Briefings is directed.

While accounting for the changes in the mathematical landscape, Badiou must find a way to either dismiss the relevance of Category Theory for his philosophy or to integrate it. Badiou opts for the latter, but he maintains his commitment to the ontological primacy of Set Theory, positing Category Theory as the logic of appearing. The addition of Category Theory opens the door to a thinking of phenomenology, and forces Badiou to come to terms with the relationship between mathematics and logic, ontology and phenomenology, a project that only comes to completion in Logics of Worlds. We find discussion of these points scattered throughout the many historical reflections, especially “Platonism and Mathematical Ontology” and “The Aristotelian Orientation and Logic.” The most sustained discussions of the relation of mathematics and logic fill most of the final six chapters, culminating in the impressive “Being and Appearing,” where Badiou offers his first direct account of the relation between ontology and phenomenology.

Since, for Badiou, ontology is mathematical and phenomenology a matter of logic, the chapter “Being and Appearing” is largely a discussion of the relation between mathematics and logic. Setting things up this way implies a clear separation of phenomenology from ontology (of course, this clarity will become muddied in the details). For the tradition extending from Kant through Heidegger, this is a novel separation. It is no surprise that, having already argued at length that all we can say of Being qua Being we can say in mathematical terms, Badiou positions mathematics as the more fundamental term in the relation. As he suggests, “logic is from within mathematics the movement of thought explaining the being of appearing, that is, of what affects Being as it is Being-there.” (164) And he continues, “appearing is nothing but the logic of a situation,” where a situation is simply an ontological structure. (164) In Briefings, Badiou does not provide a fully detailed account of the logic of appearing, nor does he satisfy the need to demonstrate fully how the logic of appearing is rooted in his set-theoretic ontology. Still, he does tell us that “the event,” perhaps the fundamental concept in Badiou’s work on the whole, “occurs when the logic of appearing is no longer apt to localise the manifold-being of which it is in possession.” (168) This concluding thesis, a coming-together of his ontological and phenomeno-logical thinking, remains undefended within the pages of Briefings, and thus ought to be read as a kind of promise.

The fact that this book is a tentative intermediary in the genesis of Badiou’s thought, along with the long shadow cast by his major works, may lead to Briefings being under-appreciated. Perhaps Madarasz was right to worry about marketability. Still, this book reveals a great deal about the development of the ideas that have begun and will continue to occupy the debates within Badiou scholarship and Continental philosophy more generally. That said, this book is probably not the best for someone coming to Badiou with a casual interest or a general curiosity about his work. For those readers, titles such as Ethics and Metapolitics (2005) or other more polemical works such as Polemics (2006) and The Meaning of Sarkozy (2008) would be a better start. The task posed to scholars is to work through Briefings and the major work that follows to see if Badiou delivers on his promise.