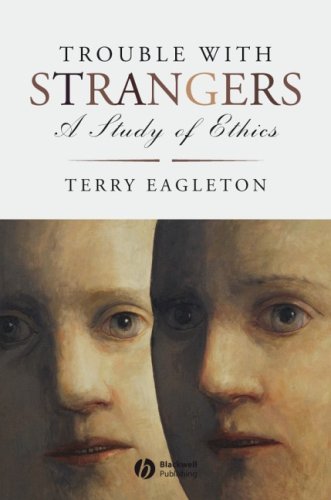 A radical theology of “resurrection” lies at the heart of this cogent, funny and stimulating book: the resurrection of socialist ethics and politics within cultural studies, which have dissolved the only true foundation for such ethics, that is, biological nature, the mortal human body, into the new essentialism of “culture.” Readers familiar with After Theory (2003) will recognise that Eagleton is thus embarking on the project he laid out there, that of challenging cultural theory to “break out of a rather stifling orthodoxy and explore new topics, not least those of which it has been unreasonably shy,” and above all that of morality. (After Theory, 222) Trouble with Strangers sweeps through the central 18th-century moralists of “the ethical imaginary” (Hutcheson, Hume, Smith, Burke, with nods to Shaftesbury and Rousseau); through Kant and Spinoza (philosophers of “the ethical symbolic”); through Schopenhauer, Kierkegaard and Nietzsche (philosophers of “the Real”); and finally, through the latter’s post-modern successors, Levinas, Derrida, Badiou and Lacan. Aristotelian virtue ethics also commands a grudgingly admiring explication and critique. Punctuating this journey are illuminating digressions on Shakespeare, Sterne, D. H. Lawrence, Woolf, Kleist, Conrad, Richardson, Wordsworth, Emily Brontë and Beckett.

Indebted as some of these readings are to Eagleton’s earlier work, especially The Ideology of the Aesthetic, the originality here lies in his creation of a typology of ethical theories based on Lacan’s categories of the imaginary, the symbolic and the Real. Lacanian psychoanalysis as interpreted by Slavoj Žižek, together with Judeo-Christian ethics as interpreted by Eagleton in a thoroughly “materialist” fashion, constitute the “crux” of his self-styled radical theology. Why this particular conjunction of psychoanalysis and theology? And how compelling a program for cultural (including literary) studies, essential to a civic education directed toward the political resurrection Eagleton has in mind, does it suggest?

For Eagleton, the Lacanian typology lends itself to an almost perfect mapping onto the Christian myth of the fall. He repeatedly refers to the primal unity of the pre-reflective, pre-social “mirror stage” of the Lacanian imaginary as “Edenic” or as “pre-lapsarian innocence.” He speaks of the “fall” in the category of the symbolic, a felix culpa, which, while constituting the self as a differentiated, self-conscious subject newly aware of its place within a system of dependencies, nonetheless results from the psychoanalytical gash or wound of “original sin.” This original sin is a repressed, subconscious awareness of “the Real”—or in Eagleton’s language, of death—with which the subject must come to terms in the third, highest stage of the Real. This higher innocence, which embraces instead of represses one’s new consciousness of death, constitutes the resurrected body and the healed psychoanalytic subject, which are the foundation of Eagleton’s own ethics and politics.

The British moralists are proponents of the spontaneous, instinctual, bodily, affective ethics of “sympathy,” associated with “the imaginary.” Yet, Eagleton objects that if morality is just a matter of spontaneous sympathy, it is not morality at all: Where is the virtue in feeling/doing what one cannot help? It is too easy. Furthermore, because sympathy is lacking in reason, as it is grounded in mere bodily affections, it is feeble, extending in weakening concentric circles of feeling from those closest to us—family, friends, neighbours, immediate community—to perhaps one’s nation (Burke’s politics of sympathy), but rarely beyond. Such is the trouble with strangers: they are too far away.

The kinship bonds, customs, habits, manners, traditions, local pieties and affections of the British moralists give way to the bloodless abstractions of the Kantian “symbolic,” the realm of duties, obligations and moral law pitted against inclination and desire. This is the realm of structuralist semiotics and difference, the play of signs, the mediations of discourse, contracts, reason and abstract universal rights, in short, the realm of politics. Here, strangers are admittedly protected by law from the weak, unstable sympathies and prejudices of the imaginary. But at what cost?  If “[a]ll neighbours are strangers,” pitiless “equality of law” replaces sympathetic “equality of flesh and blood.” (88)

It is these two extremes, then, that have to be shattered by the violently disruptive incursion of “the Real,” a violence which nonetheless should instantiate a higher imaginary, its unmediated embrace. And through his critique of modern and post-modern philosophers of the Real, Eagleton makes the case for his psychoanalytic Judeo-Christian position. His ethic is based not on “the plastic, remouldable, socially constructed body,” that “wildly popular topic in U.S. cultural studies,” but “the piece of matter that sickens and dies.” (After Theory, 186)  The foundation for Eagleton’s ethics is the crucifixion understood as a wholly material event, one which, in fact, marks the end of theology: “The age of religion is superseded on Calvary…. Christ is the last high priest…. The only burnt offering that counts in the new dispensation is a broken human body. It is around this monstrous truth that a new kind of solidarity must be constructed.” (299)

If this “new kind of solidarity” or ethics is not founded on post-modernism’s culturally constructed body, neither is it founded on the post-modern ethics of the real as “Desire,” whose history from Schopenhauer to Lacan, Eagleton chronicles in Part III of his book. This empty, insatiable, ceaseless, metaphysical Desire or sense of “lack” originating in the fall from primal unity is a desire without an object that post-modernism exhorts us to embrace with “jouissance.” Yet, it is profoundly hostile to both neighbours and strangers, spurning the “banal” realities of the commonplace, the everyday, the web of (ethical) human relations—together with the (political) institutions that sustain or hinder them—within which we necessarily live.

Rejecting both the clubbish “affect” of the British imaginary and the post-modern metaphysics of objectless “desire,” Eagleton celebrates Judeo-Christian “love.” For him, “the paradigm of love is not the love of friends—what could be less demanding?—but the love of strangers. If love is not just to be an imaginary affair, a mutual mirroring of egos, it has to attend to that in the other which is deeply strange, in the sense of being fearful and recalcitrant. It is a matter of loving that ‘inhuman’ thing in the other which lies also at the core of ourselves.” (After Theory, 168) One has to recognise “at the core of one’s being” “an implacable demand that is ultimately inscrutable, which is the true ground beyond the mirror, on which human subjects can effect an encounter.” (60, my emphasis) This “sublime strangeness” of the Real, death, is at once individual and universal, love and law, love and “justice,” the latter understood as a kind of mutual recognition, “giving them [others] their due so they can flourish. (307)

Yet, all this talk of love and death as grounding the ethics and politics of the everyday raises many questions. Eagleton admits that socialism and Christianity can seem too “otherworldly” in their hope of a humanity “transformed” by a personal-impersonal kind of love (293), but insists nonetheless that everyday acts of kindness can do this. Yet, like the British empiricists he critiques, he assumes that recognition of our shared mortality will inevitably prompt spontaneous love, in an equally somatic and materialist ethics and politics. Conversely, like the post-modernists he critiques, he adopts a curiously metaphysical vocabulary of “the Real,” of a sublime strangeness, of a negative “theology” empty, in fact, of theological content, i.e., soul or spirit.

Eagleton opts for this “radical theology” over an Aristotelian virtue ethics he repeatedly praises because “it re-embeds moral discourse in the whole business of culture, childhood, upbringing, kinship, politics, and education.” (302) Yet, he astonishingly faults Aristotle for so “surprisingly” naming “politics” as the “science that studies the supreme good of man” (304), when man as a political animal is, for Aristotle, the essence of the human. He claims there is no connection between Aristotle’s Ethics and his Poetics (304), when the mainspring of tragedy, comedy and the attainment of moral excellence is “hitting or missing the mark”; he makes no mention of the profound connection between the Poetics and the Politics, the latter containing Aristotle’s most extended treatment of catharsis. Aristotle could never understand, he claims—as Christianity and psychoanalysis do—that loss, desire, love, the tragic sense of life are “intimately allied” with “human flourishing” (304); this is why Aristotle fails as a philosopher of the Real. Yet, tragic catharsis receives such extended treatment in the Politics precisely because of its centrality to the seamlessly intertwined ethics, aesthetics and politics of civic education which is Aristotle’s—no less than Eagleton’s—ideal.

Reason and revelation have never been easy to reconcile; Eagleton has, in the end, opted for a challenging, even exhilarating, but ultimately disappointingly post-modern version, at once too material and too metaphysical, of the latter. We are—naturally—neither beasts nor gods.