Greg Kennedy, An Ontology of Trash 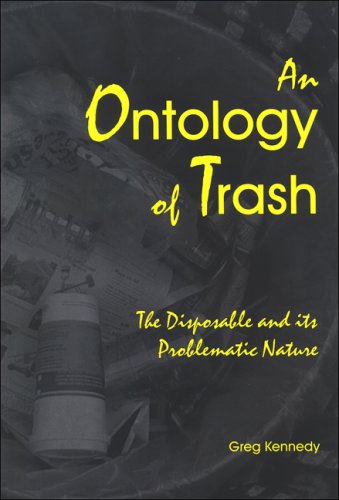 As a sort of preliminary remark, Greg Kennedy begins his book by describing it as “something of an odd fish.” (ix) Kennedy intimates that one need not look any further than the title, An Ontology of Trash, in order to be perplexed by the text that follows.  The book, however, is by no means an oddity in the sense that it will remain strange if one actually reads it.  In fact, it actually delves into a lot of material that is, at least in a rudimentary sense, quite popular at the moment.  This is not to say that Kennedy’s book is another run-of-the mill offering whose central thesis could be acquired from a few minutes in front of the television screen.  Rather, it is an intelligently argued work that ventures in a quite refreshing way into the complex intersectional space(s) of philosophy, the natural environment and the contemporary society of consumption.

Chiefly relying upon Martin Heidegger’s fundamental ontology throughout to make his case—albeit more as a point of departure than of a dogmatic regurgitation—Kennedy lays out an intriguing argument for the inherent link between being and trash.  For Kennedy, the act of peering into a refuse bin (any refuse bin will do) at the discarded contents lingering inside is the equivalent of gazing into a mirror.  That is to say, what can be seen in the trash can is a reflection of one’s very being.  It is, to put it in Kennedy’s terms, a form of “self-exploration.” (x) In particular, Kennedy claims that analysing trash reveals the technological mode of being in contemporary society.  As the author puts it, “The ontology of trash, therefore, is the study of our modern technological mode of being—a kind of philosophical biography of our life as consumers.” (xvii)

Although a work of ontology, the central focus of Kennedy’s book is the widespread proliferation of disposable things in today’s prevailing consumer society.  Kennedy highlights how it seems as though throughout one’s everyday life in this society of consumption there are countless objects that surface for a brief moment only to disappear forever without a second thought from its consumer.  This is not surprising, considering these disposable items are designed with their ultimate demise in mind.  It is this predetermined and inevitable fate of so many commodities that disturbs Kennedy.

To articulate his project, Kennedy offers what he deems to be a crucial distinction between a metaphysical view of trash and his ontological view (but he also describes this as existential and phenomenological).  According to Kennedy, only with the latter perspective can one appropriately distinguish between waste and trash. (9)  A metaphysical view conflates the two, whereas Kennedy argues that his position (which he views as the counterpoint to the metaphysical view, although he also acknowledges his study to be somewhat metaphysical) illuminates the difference, which is best summarised in a passage near the end of the book as follows: waste “is obvious and offensive.  Trash, on the other hand, has an intrinsic tendency to conceal itself and deceive.” (162)

To situate trash as a problem in the proper historical context, Kennedy argues that, out of necessity, before the Industrial Revolution, people were simply not afforded the opportunity to throw things away.  During that time, things would eventually wear out and become useless because their constitutive properties would deteriorate.  It is only when their use-value had substantially depleted that they would be disposed of.   The contemporary situation is much different in that there are countless things whose constitutive properties change relatively little, if at all, and are nevertheless thrown away.  For Kennedy, the scientific and technological advances that fuelled the Industrial Revolution also mark a shift from the conservation of materials to the advent of disposables.

As mentioned above, this book arrives on the scene at a time in history when ecological topics, for better or worse, are perpetually becoming part of mainstream discourse.  Though Kennedy claims that he is not condemning the modern world, his text is certainly not a celebration of it either.  Clearly, there is a great deal of dissatisfaction with the current order of things, so much so that a veritable clarion call is offered in the final two chapters.  Or, if this is too strong, it is, at best, a cautionary tale of technological reason gone awry, and, at worst, a declaration that technological reason is awry.

Each chapter of the book takes up a one- or two-word theme (waste, body, food, city, trash, human extinction), which are delved into with varying degrees of depth.  For example, on the one hand, the food chapter is particularly thought-provoking, especially where Kennedy notes how “food most directly implicates our finitude.” (55) The city chapter, on the other hand, does not delve deeply enough into questioning the city, but instead probes into the nature of technology and trash.  This is a missed opportunity in one respect, while at the same time a serendipitous treat for the reader.  At the expense of a clarification of the city as a specific problematic comes a carefully detailed and well-crafted argument on the importance of technology in the production and/or consumption of trash.

All in all, Kennedy offers a timely intervention that will be of interest to many.  In particular, it seems as though philosophers, ecologists, environmentalists and individuals or groups of similar ilk would get the most traction from this material.  Unfortunately, the technical terminology used in sporadic flourishes throughout the book will most likely leave the casual reader unsure how or unwilling to connect the dots.  This is unfortunate since Kennedy’s book offers the opportunity to think about trash in a serious manner that would be beneficial for more than just scholars, especially considering that virtually everyone is familiar with trash, or has some kind of vague and general conception of it.  However, as Kennedy argues, most do not actually know what it is; nor do they care to.  Unfortunately, his book may not be the appropriate catalyst for these individuals to begin to care.

By Kennedy’s standards, “the success of an ontology of trash is to be gauged not so much in what it proves as in what it exhibits and elicits.” (184) Judged solely by these modest standards, this book can certainly be deemed a success. Kennedy exhibits both the seriousness and complexity of an ontology of trash, and he elicits many thoughts and questions in what is ultimately a rich and provocative account of consumption in contemporary society that will keep most readers engaged.  For those who are willing to open Kennedy’s book and look past any so-called oddities that arise at first glance, there is much to appreciate in this text. It should be added that, along with Kennedy’s standards of success, if this book is truly to be deemed a success, its readers will look up from the pages of the book and look over at the contents of the nearest trash can.